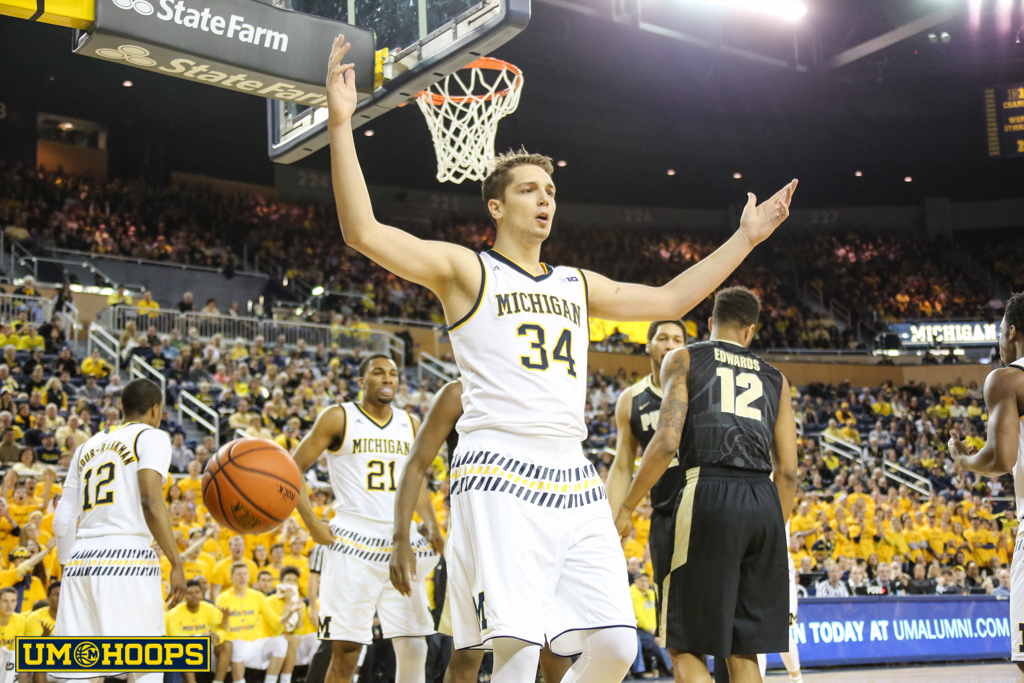 When the Michigan basketball team missed its first five shots of the game, it was instantly thrust into the comeback role in Columbus. The Wolverines were momentarily up to the task, taking a lead several minutes into the first half.

When the Michigan basketball team missed its first five shots of the game, it was instantly thrust into the comeback role in Columbus. The Wolverines were momentarily up to the task, taking a lead several minutes into the first half.

But by the end of the first half, the Wolverines trailed by eight, and it could have been even worse. The dropoff came from a flat effort out of the gates and caused Michigan head coach John Beilein to question the Wolverines’ depth.

Without senior guards Caris LeVert and Spike Albrecht and with a roster that was already thin to begin with, the shorthanded Michigan team showed its fatigue just three days after a physical game against Purdue.

That fatigue was especially evident in the Wolverines’ typical comeback leaders — junior guard Derrick Walton Jr. and junior forward Zak Irvin — who combined to shoot just 10 of 28 from the field.

“I think both of them — Derrick was still fatigued from the Minnesota game on Saturday, and now (he had to) go back (and play) again,” said Michigan coach John Beilein. “They did almost nothing on Sunday, so we could really get some rest for them, but there’s a lot of minutes being logged out there.”

The loss in Columbus closes a three-game stretch in seven days which included trips to Minneapolis and Columbus along with a home bout against the 18th-ranked Boilermakers. Michigan went 2-1 in the stretch, but is unhappy with Tuesday’s loss, which eliminates the team’s margin for error down the stretch.

“Our week of playing at Minnesota Wednesday, an emotional week, winning that game at Purdue and the lack of depth we have right now may have affected some of our guys,” Beilein said.

Of course, LeVert’s back-and-forth status, along with sophomore guard Muhammad-Ali Abdur-Rahkman’s early foul troubles only added on to the Wolverines’ woes.

But with Michigan now in crunch time, its leaders aren’t making any excuses.

“I think every team goes through this, three games in seven days,” Irvin said. “I don’t really want to use fatigue as an excuse.”

Fatigue and a lack of depth may have played a role in it, but the defining component of Tuesday’s loss was that the Wolverines — long a team that lives and dies by its outside shooting — shot just 5 of 24 from 3-point range.

Including Saturday’s win over Purdue, Michigan is now 10 for 44 over its last two games from beyond the arc. And if you were to take away Irvin’s 6-for-14 clip in that stretch, Michigan is shooting a paltry 13.3 percent from deep in its past two contests.

“When an elite shooter like Derrick goes 2-for-something the last couple games, it’s a bad number,” Beilein said. “Duncan as well. Ohio State’s defense is really good. We’ve played four or five teams in this league (like that).”

On Tuesday, Ohio State’s defense did eliminate some high-quality shooting attempts, but the defining moment came when redshirt sophomore Duncan Robinson — considered one of the best outside shooters in the country — missed two open threes on one possession. He was only 1 for 5 from 3 on the night.

“I’m proud of how hard we battled,” Beilein said. “I just wish we could have gotten some easier shots or made the ones that we did get. We didn’t get enough. Ohio State, they got us, and that’s all there is to it.”

There weren’t many positives from Michigan’s loss to the Buckeyes, but one of them may have been forward Mark Donnal.

After disappearing early on in the season, the junior has emerged as a reliable post presence. He has gotten beat by elite forwards some contests, but led the Wolverines with 17 points and seven rebounds.

The performance brings his conference stats to 10.2 points and 5.0 rebounds per game, more than adequate on the guard-heavy team.

“I got some open looks. Credit to my teammates for finding me,” Donnal said.

Added Beilein: “He did a really great job leveraging his body … He actually could have had more (points).”

The performance came just a day after Beilein admitted that he was limitng Donnal’s workload during the home stretch of the season due to previous illnesses and fatigue from last season.

“I have to be careful with that because he has a propensity to get worn down in the season,” Beilein said Monday. “If we were 20 and 20, if that other 20 comes from multiple guys (Ricky Doyle, D.J. Wilson, Moe Wagner), that’s probably best for him.”

Donnal was stretched to 32 minutes of game time on Tuesday, but even in the extended role, he made the most of it.