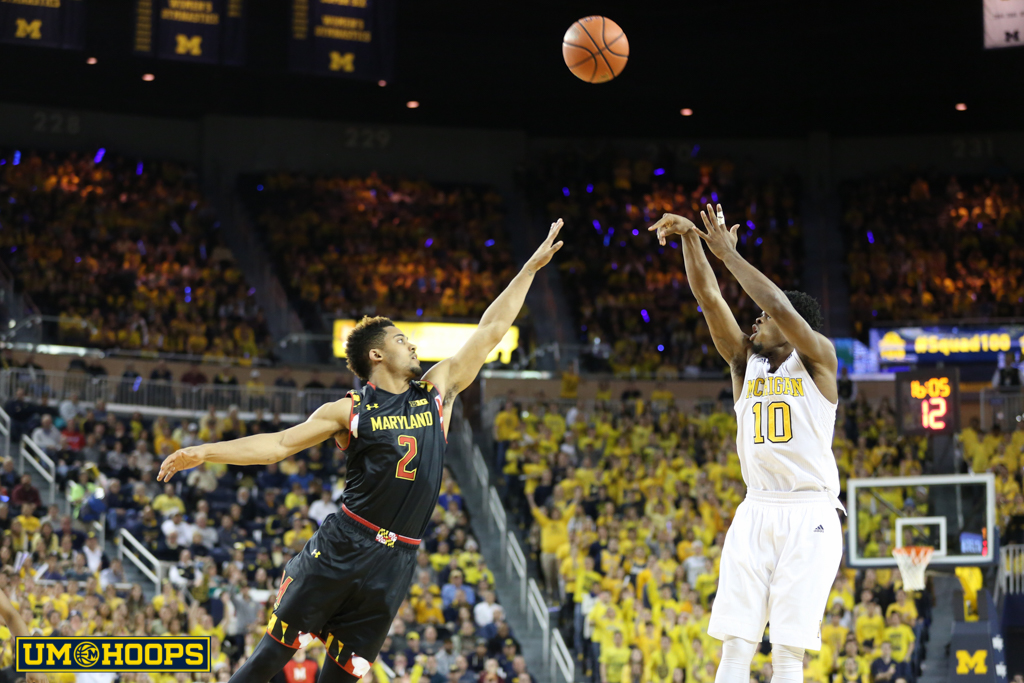 Michigan is on the bubble and under pressure while facing one of the most difficult portions of its conference schedule. The Wolverines earned a few much-needed extra days off before Sunday’s game, but they’ll also have to play one of the Big Ten’s best in Maryland.

Michigan is on the bubble and under pressure while facing one of the most difficult portions of its conference schedule. The Wolverines earned a few much-needed extra days off before Sunday’s game, but they’ll also have to play one of the Big Ten’s best in Maryland.

Michigan beat the Terps in early January, one of its best wins of the season and an emotional boost that was meant to prove that it could survive with Caris LeVert. LeVert has only played 11 minutes since then and the Wolverines have seen plenty of ups and downs — now sitting at 9-5 in the conference in need a few more wins to punch their tournament ticket.

Maryland has dropped four  conference games — at Michigan, at Michigan State, home to Wisconsin on Saturday and at Minnesota on Thursday. Any newfound life in the Big Ten Championship race that the Terps had regained with Iowa’s loss at Penn State was wiped away when the Golden Gophers picked up their first win of the Big Ten season over Maryland.

Maryland has the Big Ten’s best defense, allowing .96 points per possession in Big Ten play. The four teams that have beaten the Terps this year did it with offense. Wisconsin, Michigan, Michigan State and UNC were the only teams to score 1.11 points per possession or more when they faced Maryland. Big Ten opponents are shooting just 44% on twos (2nd) and 29% on threes (1st) for a 43.8 eFG% (1st) against the Terps, who have the third tallest roster in Division I.

Offensively, for the second consecutive year, the Terps have been pretty average in Big Ten play. Maryland is scoring 1.06 points per possession in league play, just the eighth best offensive output this season. Turnovers and perimeter shooting have been the biggest issue for Mark Turgeon’s team. Maryland gives the ball away on 18.4% of its offensive possessions, second worst in the conference, and shoots just 31.2% from three-point range (10th). Despite the best two-point shooting percentage (53.5%) in the conference, the Terps still attempt 37.4% of their field goals from outside the arc resulting in an average 51 eFG% (7th).

Despite its size advantages, Maryland has actually been a below-average rebounding team on both ends of the floor. The Terps grab only 29% of their misses (8th) and allow their opponents to grab 29.4% of their misses (11th) in league play.

Point guard Melo Trimble has been in a major slump. He’s 7 of his last 29 on twos and 2 of his last 10 on threes over the last four games. He had just 10 points in each Maryland’s last two losses and turned the ball over 11 times total. Trimble is still one of the best point guards in the league, but his ability to get to the foul line has declined this year. Last year he attempted 62 free throws per 100 field goal attempts in league games, this year his free throw rate is down to 37.4%.

Rasheed Sulaimon has been averaging over 20 points per game in Maryland’s last four and he’s a volume shooter that can fill it up. He went through a rough patch early in conference play, recording an offensive rating under 100 in four out of five games, but he’s been on a roll of late.

Robert Carter is a matchup nightmare for Michigan at the four. He’s more versatile than someone like Caleb Swanigan, but is more than capable of posting up and scoring (80th percentile). He has the tendency to settle for threes, but is connecting at 39% in Big Ten games from long distance. Carter is also a great shot blocker and rebounder on the both ends of the floor.

Jake Layman played arguably his best Big Ten game of the season in Ann Arbor, but has really been slumping throughout. He’s shooting 55% on twos and 33% on threes in Big Ten play, but he’s only reached double figures in four of the last 9 games.

Diamond Stone sat out during Maryland’s loss at Minnesota while serving a suspension for slamming a Wisconsin player’s head against the ground. Stone is a great post-up player, he finishes at the rim, and gets after it on the offensive glass. He has all the tools and really dominated the game in Ann Arbor on the low block.

Maryland doesn’t play a deep bench. Jared Nickens comes off the bench to provide a volume three-point shooting option, but he’s shooting under 20% from three in Big Ten play. Jaylen Brantley played only one minute in the first meeting, but he’s Trimble’s backup. Damonte Dodd backs up Stone at the center position and provides a wide body and a rebounding presence.

KenPom projects a 74-66 Maryland win, giving the Wolverines a 22% chance at the road upset. The Terps haven’t been playing well, dropping their last two, but they’ll be motivated to bounce back against Michigan on their home floor in a nationally televised broadcast.