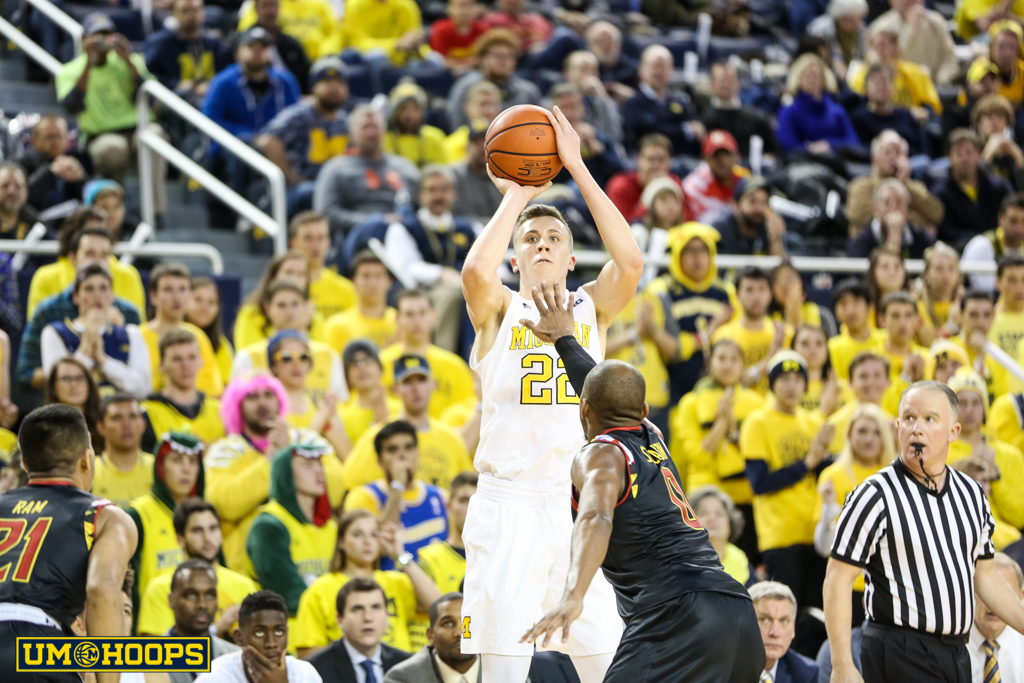 In all likelihood, the Michigan basketball team will need to play its best game of the season to leave College Park with a win Sunday.

Though the Wolverines (9-5 Big Ten, 19-8 overall) have defeated No. 6 Maryland before, and the Terrapins (10-4, 22-5) have lost two in a row, the talent gap is wide between the two teams, and will likely be wider Sunday. Maryland gets star freshman Diamond Stone back from suspension, while Michigan’s leading scorer Caris LeVert is likely to miss his 13th game of Big Ten play.

Making matters worse for the Wolverines is that the extra effort needed to upset Maryland cannot come through extra effort in practice.

Recognizing that fatigue may be catching up to his team more than shooting slumps, Michigan coach John Beilein has tried to scale back practices. When that didn’t pay dividends against Ohio State on Tuesday, he upped the ante.

“’Stay off your feet, and let’s get ready for this next run that we have.’ ”

Beilein felt that Robinson in particular needed rest. After shooting nearly 60 percent from 3 during nonconference play, the redshirt sophomore forward has cooled off. In his last six games, Robinson is just 7 of 26 (26.9 percent) from beyond the arc, and that includes a 4-for-7 performance at Minnesota Feb. 10.

Through much of the struggles, Beilein cited a lack of transition offense and stagnant ball movement as culprits preventing Robinson from getting open looks. But against the Buckeyes, Robinson had opportunities, but shot just 1 for 5 from 3-point range.

“I felt bad at the Ohio State game that I didn’t think we got him good enough looks,” Beilein said. “But then I watched it over, he got the same looks that he hit five against Maryland. It’s just, make a couple.”

It was inevitable that Robinson would regress to the mean as the season wore on, and that Big Ten teams would have better plans to defend him, so the dip isn’t shocking. But even Robinson admitted that, after playing Division III ball and redshirting the previous two seasons, the physical gauntlet the Big Ten schedule can provide is taking more of a toll than he expected.

“I got good looks in that game and I’ve been getting good looks pretty recently,” Robinson said. “So I’m just focused on knocking them down when I find myself open. Just the physicality, just playing a lot of minutes, it’ll get to you from time to time.”

In most situations, players are able to get through slumps by tweaking and relentlessly working their shots in practice. Instead, Beilein’s main concern on Friday was that Robinson was doing that too much.

The forward is known to make hundreds of shots every day, even before games. But to return to his early-season form, Beilein thinks that the opposite needs to occur, and even threatened to not take Robinson to Maryland if he couldn’t stop shooting.

“He needs to rest his legs if he’s going to be a good shooter. And he’s meticulous about getting in there and making hundreds of shots every day, that could catch up with him.”

Of course, Robinson isn’t alone. The Wolverines are shooting just 10 for 44 from 3 in their last two games — a clip that will not upset the sixth-ranked team in the country.

So instead of keeping the nose to the grindstone, Beilein is taking the grindstone away for a bit, and counting on the extra effort to be there for tipoff.

“They’ve been playing a lot of minutes, but that’s part of college basketball now,” Beilein said. “We’ve got to fight through those things … It’s that time of year where you’ve got to do whatever you can to win.”