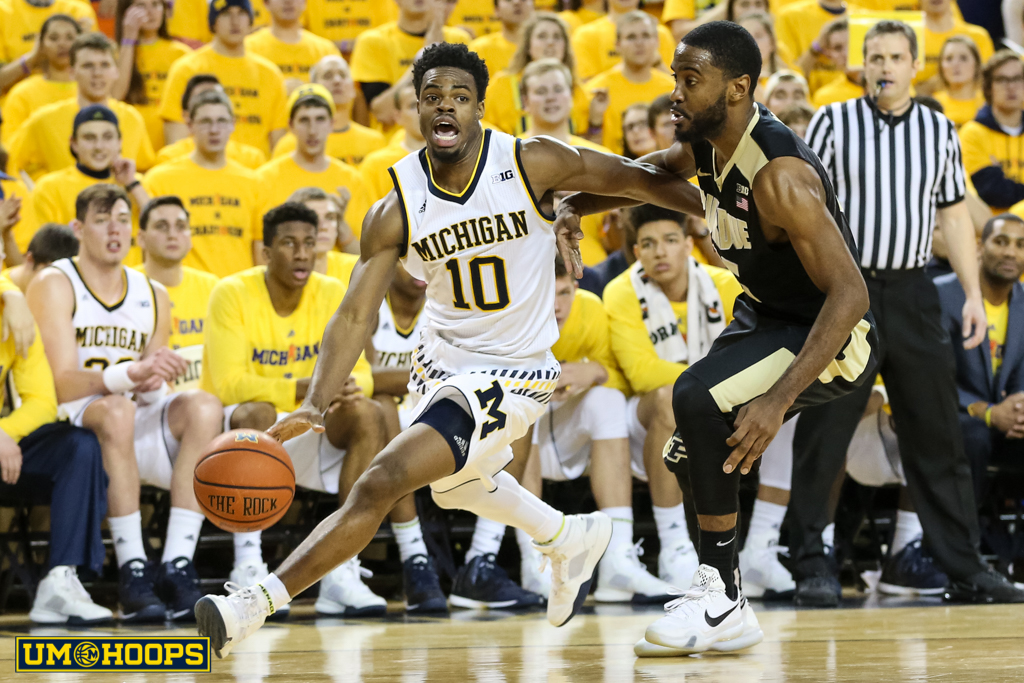 “We’ve got to do a great job defensively down the stretch or our season won’t be very long,” Beilein said. “It’s that simple.”

The coach saw plenty of potential in his team’s four-point loss at No. 8 Maryland, but also saw 86 points allowed in the game. He sees a tough schedule in the regular season’s final month, but also sees a 57.9 eFG% defense in February already. The head coach also knows that his team has held just one of its last seven opponents below a point per possession.

Beilein can applaud his young team’s development, but he also knows that, if that same young team has any desire in making the NCAA Tournament, it will only occur with improved defense.

“We’ve got to do a great job defensively down the stretch or our season won’t be very long,” Beilein said. “It’s that simple.”

The Wolverines will have a chance to take steps in that direction Wednesday, when they take on a Northwestern team that is 11th in the Big Ten in eFG%, 10th in offensive efficiency, and below average in the conference in just about every offensive category. Even with eight days of rest, the Wildcats could be a much-needed break in an end-of-season gauntlet for Michigan.

The Wolverines will be heavy favorites thanks to their plethora of scoring threats, but until the defense makes the progress it needs to, the success on paper carries little weight on the court.

“We’re starting to shoot the ball better, but the defense isn’t where it needs to be,” said junior forward Zak Irvin. “We’re working on offense, but we’re really working on defense because that’s the main problem for us.

Of course, defense has always been a weak spot for Michigan in the John Beilein era. Even in the Wolverines’ NCAA Runner-Up finish in 2013 — the pinnacle of Beilein’s tenure and by far best team — the Wolverines were just 48th in the nation in defensive efficiency.

This season’s team doesn’t have that unit’s talent or health, making the NCAA Tournament a suddenly-fleeting possibility after looking like a sure thing most of the season.

“We still can’t plug the holes in our defense right now,” Beilein said. “We just cannot do it. And we’ve just got to keep working at it. We’re going to do some drills today — like back to the beginning in some things — because we’re just having trouble with just the idea of guys in the midst of action getting into a stance and playing really good gap defense or 1-on-1 defense.”

Play defense and let the offense win the Wolverines’ way into the tournament. As Beilein says, it’s that simple.

With senior guards and team captains Caris LeVert and Spike Albrecht both still on the bench with injuries, Beilein said Tuesday that he was impressed with how Irvin and junior guard Derrick Walton Jr. have stepped up as leaders.

And as leaders of a thin roster without Albrecht or LeVert, Irvin and Walton said they were impressed with another player who has been stepping up — sophomore forward Kam Chatman.

Chatman has played little more than garbage time all season, but was thrust into the first half of Michigan’s game against the Terrapins Sunday. He knocked down two 3s, and contributed all over the court — picking up two assists, a rebound and a steal — in his eight minutes of action.

He didn’t necessarily light up the box score, but his presence was felt.

“That was huge, his play kept us in it in the first half,” Irvin said. “We were struggling to buy a basket and he came in and hit two big 3s for us.”

Beilein indicated both after the game on Sunday and on Tuesday that Chatman could see more playing time after the improved performance. The coach has lamented for weeks about how he needs 1-2 more players step up in his captains’ absences.

And, if you ask the de facto captains, that player may be Chatman.

“He never really got out of it mentally, didn’t check out, kept fighting every day,” Walton said. “He got an opportunity and capitalized on it. I’m excited to see what he does next.”

Added Irvin: “He’s been getting better each day in practice, it’s just nice to see him have that type of first half in a game.”

Though Beilein was focused primarily on the current season in Tuesday’s press conference, he did take the time to address two potential issues regarding next season.

Albrecht — who announced his retirement in the fall — is practicing with the Wolverines again, and has hinted that he would like to return. Michigan is currently over the limit on scholarships for next season, but Beilein says Albrecht’s return for a fifth season hasn’t been completely ruled out — provided he gets healthy.

“Right now he’s got to get healthy and there’s a lot of water that has to go under the bridge before we get to that point,” Beilein said. “We’ve got to decide if he wants to play, if he’s healthy.

“That’s why I want him out here just playing a little bit, not for us, but for him. … Just to see whether he wants to continue to try to play, whether it’s professionally or graduate from Michigan and go play somewhere or if he wants to go play here or transfer, all those options.”

Another player that could be itching for a fifth year with Michigan is Mark Donnal.

The junior forward was reclassified as a junior from redshirt sophomore in the fall, but is averaging 11.2 points and 5.0 rebounds per game in conference play — including 25 and five to go with five blocks against Maryland.

“We probably will have that (conversation about re-classifying) ongoing,” Beilein said. “He’s really doing a great job of earning his scholarship this year. He’s doing a wonderful job of working hard and doing everything.

“But we’ll meet at another time because it obviously effects our scholarship situation in 2017.”