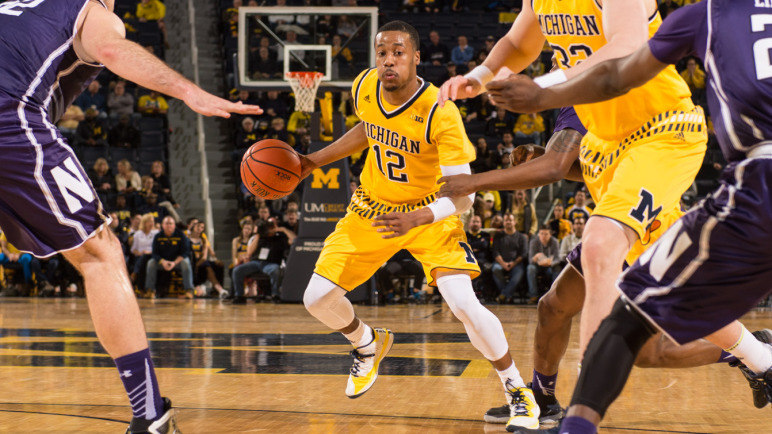 Whatever psychological reasoning you want to use — flat; nervous; up-tight; feeling the pressure — Michigan was awful in the opening stretches of both halves on Wednesday night at the Crisler Center.

Whatever psychological reasoning you want to use — flat; nervous; up-tight; feeling the pressure — Michigan was awful in the opening stretches of both halves on Wednesday night at the Crisler Center.

The Wolverines were outscored 18-0 combined in the first 8 possessions of the first half and the first 5 possessions of the second half. In a game that everyone knew Michigan couldn’t lose as much as it had to win, it managed to create a little extra pressure with such an underwhelming start.

But as Wednesday’s game wore on, we saw a familiar script when the Wolverines have been matched up against an average opponent. Michigan handled business. Outside of those 13 possessions, this was a game that Michigan controlled, outscoring the Wildcats 72-45 in the other 50 possessions of play — an efficiency margin of .54 points per possession.

The more interesting story line was how the Wolverines won: with free throws, isolation drives and interior scoring rather than three-point shooting.

Chris Collins pitched a curve ball when he went strictly man-to-man after playing primarily matchup zone throughout the Big Ten season. A full week to prepare gave the Wildcats a bit of extra flexibility and it took Michigan a while to adjust, but eventually they figured out enough answers offensively.

There were plenty of open three-point attempts, but no one other than Aubrey Dawkins could connect. Dawkins made all three of his attempts as his teammates made 1-of-11 from long range. Michigan still managed to score 1.17 points per possession despite the woeful perimeter shooting, because it was scoring inside reliably.

The Wolverines outscored Northwestern 32-18 in the paint and made 14-of-18 shot attempts at the rim for the game. This wasn’t the typical pass-heavy roll to the basket interior offense either, this was a game where the Wolverine guards put their heads down and attacked the rim. Only 8 of Michigan’s 24 makes were assisted and eventually it forced forced the Wildcats to start fouling.

Michigan made 20-of-25 free throw attempts to Northwestern’s 5-of-9 shooting at the charity stripe. Fouling has been an issue for the Wildcats this season and Michigan’s determination to attack the basket paid off in the end.

The oft-maligned Wolverine bench also made game-saving contributions. The bench scored 19 points, grabbed 12 rebounds and all posted plus-minus ratings of zero or better in 39 minutes of playing time.

Defensively, it’s hard to peg this performance. There were more than a few painful defensive possessions where the Wolverines let Alex Olah get loose or lost Aaron Falzon on the perimeter, but 1.02 points per possession allowed is also one of U-M’s better defensive performances and right around the Wildcats’ offensive average. The Wolverines were focused on taking the ball out of Bryant McIntosh’s hands in the pick-and-roll game which they did — McIntosh had just 4 points, but 7 assists — but the ball screen hedging left the U-M defense in scatter mode from there.

On the positive side of the ledger defensively, Michigan continued to do a great job on the defensive glass. Northwestern only rebounded 19% of its missed shots against the Wolverines, who are now ranked 3rd in the conference in defensive rebounding.

There was no secret how badly Michigan needed this game and it got the job done, almost right on cue with KenPom’s 72-65 projection. Now the challenge gets more difficult. Wisconsin is a really tough matchup with post options at multiple possessions and Iowa will likely be playing for a Big Ten title. Win one of those games and the Wolverines are headed to the dance, lose both and it’ll be a long couple of weeks.