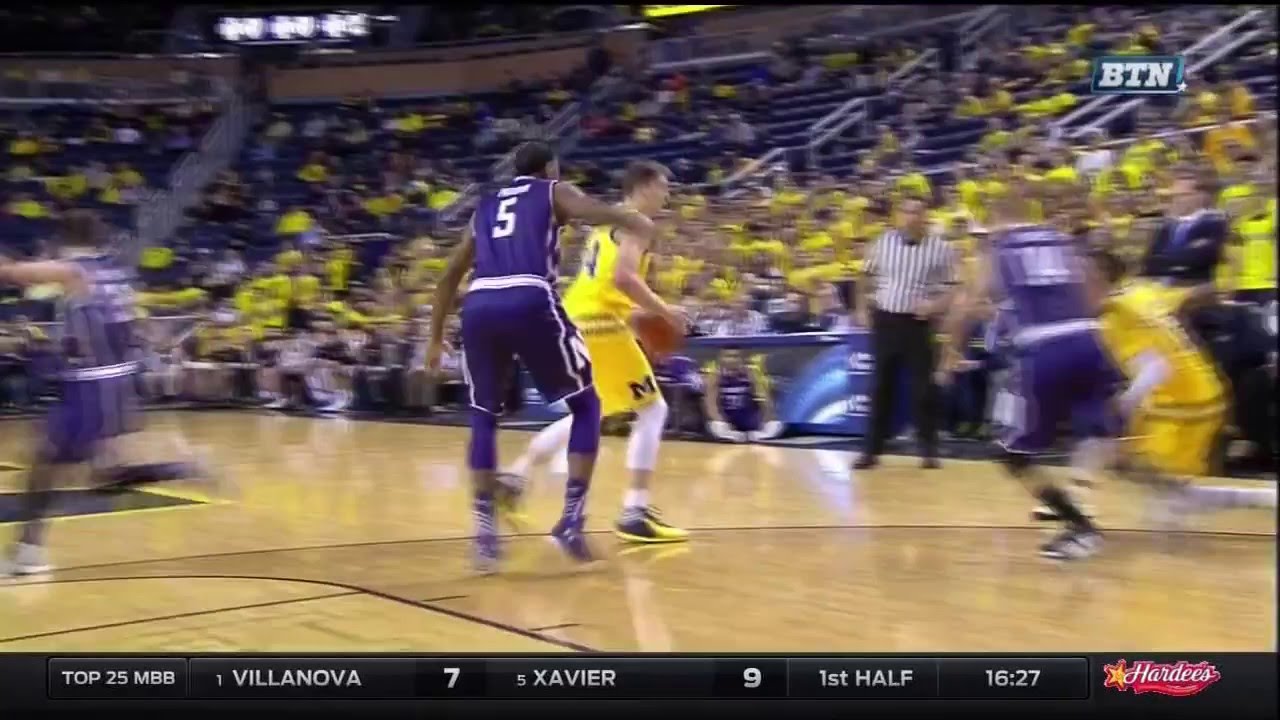 Michigan stepped up in the second half to come away with a 72-63 win over Northwestern. Here are our five key plays from the win over the Wildcats.

The Michigan basket ball team got the must-win victory it needed, but it certainly did not come easy. The Wolverines, just days after losing an 86-82 shootout to No. 8 Maryland, returned home to face a Northwestern team that had more than a week off to prepare.

Heavy snowfall kept many of Michigan’s fans away from Crisler Center, and the tamer atmosphere showed on the court too. The Wolverines missed their first six shots and fell behind, 10-0 in the opening minutes of play.

Michigan stepped up in the second half to come away with a 72-63 win. Here are our five key plays from the win over the Wildcats.

With eight days off, Northwestern, previously a match-up zone-heavy defense, took the time to develop new sets in man defense. The results paid off, as Michigan missed its first eight shots and looked completely lost on offense.

But despite being down double-digits before even getting on the board, the Wolverines quickly narrowed the gap thanks to the strong play of Muhammad-Ali Abdur-Rahkman. The sophomore guard tallied nine first-half points, all by driving to the basket.

“I thought he was tremendous,” said Northwestern coach Chris Collins. “His ability to drive the ball, get by our guys, get to the basket, draw fouls. If he did miss, we were in rotations so they got offensive rebounds. I thought he played a great game and was a big difference in the game.”

2) Outside shot finally goes on

As one of the Big Ten’s best offenses and one of the nation’s best 3-point shooting teams, it wouldn’t seem like Michigan could start 0 for 9 from 3-point range even if it tried.

But in falling behind early and failing to lead until more than midway through the second half, the Wolverines showed the danger in relying too heavily on outside shooting. Michigan made just 4 of 15 3-point attempts in the game, and sophomore forward Aubrey Dawkins was 3 for 3 (see below), leaving the rest of the team a paltry 1 for 12.

Though that number is nothing to write home about, the one that did go in sent the Wolverines into the locker room with a pep in their step. Redshirt sophomore forward Duncan Robinson — who began the half by missing several open looks — drained a 3 at the buzzer to pull Michigan to within one after trailing by as many as 13.

“We made some mistakes, but then all of a sudden they (only) have 29 at halftime and I felt good,” said Michigan coach John Beilein. “I didn’t feel good being down 17-4, but at the same time, I decided to let our guys play through it and make a couple shots because I though we did get some good shots.”

The late run was critical as the Wolverines managed to go two-for-one and get a stop defensively to end up with a mini-run to close the half with some momentum.

3) Aubrey Dawkins lights it up

In addition to Abdur-Rahkman, Michigan was carried by another sophomore in Dawkins. As mentioned above, the sophomore forward was 3 for 3 from deep when the rest of the team was either forcing shots or missing open looks. Dawkins also ended the game with 11 points and seven rebounds after playing just four minutes in the Wolverines’ game Sunday.

Two of his 3s came within just over a minute of each other and pulled Michigan back to within one point. Moments later, fellow sophomore forward Kam Chatman gave the Wolverines the lead, and Michigan’s bench — previously a weak spot in this season — shined and pushed Michigan in front.

“I’m really happy with the bench, the bench was huge today,” Beilein said. “Everything from Kam just getting in there and getting a rebound and making a foul shot, Ricky making those foul shots at the end, obviously Aubrey was a catalyst again for us. They didn’t play a lot against Maryland, I thought we had a good flow and we were scoring points.

“We need that. … You see all of our good teams over the years, we had a bench that could just come off and get us some baskets.”

The bench helped Michigan catch up and eventually take the lead, but the several minutes after that, is was back-and-forth basketball. Fortunately for Michigan, Abdur-Rahkman was up to the challenge once again.

With more drives and floaters, the sophomore ended the game with a team-high 19 points. Passing lanes were clogged and the man defense left outside options limited, but it didn’t matter. Whenever Michigan needed a basket, there was no secret where it was going to come from: the 6-foot-3 sophomore guard from Allentown.

“Muhammad is becoming a guy that just gets there,” Beilein said Wednesday night. “He keeps his dribble. He’s got the Ali shuffle around the hoop. He’s got all kinds of things happening. I’d like to have more of those guys.”

Added Abdur-Rahkman: “I just know we have to get to the basket … get downhill and just try to finish or get a foul and stop the run.”

5) Michigan, Dawkins close it out

After taking their first lead with 9:15 to go in the game, the Wolverines found themselves in a battle with the Wildcats. Eventually, Michigan pulled away thanks to Dawkins’ shooting, strong rebounding and an ability to get to the foul line.

In other words, the Wolverines won by playing tough. It hasn’t been common this season, but was evident Wednesday night.

More notable was the fact that Michigan’s toughness down the stretch didn’t come from its juniors and seniors, but from a sophomore class that has yet to see any postseason action.

With at least three games remaining, the Wolverines will likely need at least one win to have a chance at making the NCAA Tournament. But as his team develops thicker skin, Beilein feels optimistic about that happening.

“Sometimes that (toughness is) questionable about teams, especially I’m sure with us,” Beilein said. ““It’s a young team that’s learning toughness,” he said. “They’re learning what it takes to win and how to fight through adversity.

“That was as good a win as we’ve had all year as far as I’m concerned.”