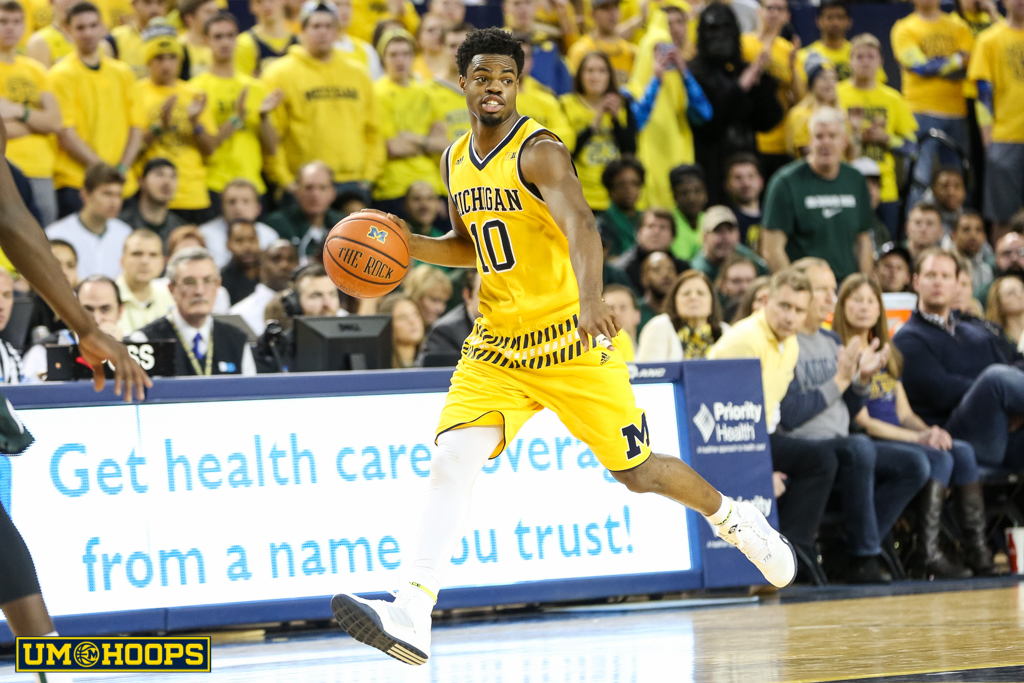 Don’t look now, but Michigan is one of the Big Ten’s best defensive rebounding teams.

Don’t look now, but Michigan is one of the Big Ten’s best defensive rebounding teams.

The same Wolverines that have frequented the lower end of the conference in rebounding all season has out-rebounded their last four teams. More importantly the rebound rates in that stretch — 30.4 percent on offense, 79.6 percent on defense — are well above the respective season averages of 25.0 and 74.2 and as good rates as Michigan has seen in years.

“It’s something we’ve been trying to emphasize in practice,” said Michigan coach John Beilein. “I think that if you look at our (rebounding efficiency rate) it’s in the top half of our league now. We’ve changed our boxing-out strategies a little bit this year and the footwork on it from something that we used before, and that has really helped us.

“So yeah, the numbers are up, but I just don’t want people to get offensive rebounds, that’s the key thing for us and the key stat in these games.”

It would be one thing for the Wolverines to find success at the boards against other small, guard-heavy teams, but the recent surge has come against teams with substantial size advantages. Northwestern, Maryland and Ohio State all start at least one player taller than any Michigan player, while Purdue — one of the nation’s best rebounding teams on both ends of the court — starts two such players.

Though simply out-rebounding a team isn’t the goal, when the Wolverines became the first team all season to out-rebound the Boilermakers on Feb. 13, the progress made was clear.

“The effort has always been there,” said junior guard Derrick Walton Jr. , who leads the Wolverines in rebounding despite being just 6-foot-1. “But these last few games we’ve been able to out-rebound some teams that have superior size and really good frontcourts, and that’s a huge step in the right direction for us.”

Of course, it helps that Walton is no stranger to leading an undersized team to rebounding success. While playing high school ball at Chandler Park Academy, Walton was one of the bigger players on the team, but could only get so many boards playing point guard.

So in part to challenge his teammates and grow as a player, Walton emphasized leaving his position to grab more defensive rebounds.

The plan worked, and now it’s working at Michigan to rile up younger, less-experienced Wolverines into rebounding success. Redshirt sophomore forward Duncan Robinson and sophomore forward Aubrey Dawkins — who averaged 2.8 and 2.5 boards per game, respectively, in shared duty at the 3 spot — have averaged 5.6 and 4.8 over the last five games.

Those jumps might seem like anomalies based on matchups, but junior guard Zak Irvin sees something else in his teammates’ development.

“I think it’s just the mentality,” he said. “We’re getting to that point in the year where every game counts, and we need everyone to play their best, physical basketball.

“(Rebounding) has been a big point of emphasis, especially after some of our losses. So it’s good to see it picking up at all positions.”

Life on the bubble a new, but welcome experience

When Irvin discussed the importance of this time of year, his eyes drifted off to the other side of the room. He wasn’t dodging the question, but reflecting on Michigan’s unfamiliar situation.

Irvin’s freshman season, the Wolverines’ final games were formalities to decide seeding and lock up an outright Big Ten title. Last season, injuries had already put the team’s goals out of reach by the time February rolled around.

But this year, Michigan finds itself squarely in the bubble — its postseason fate hinging on the final two regular season games and the Big Ten Tournament. Though the Wolverines would certainly have liked to clinch a postseason spot earlier this season, playing pressure games early has its own perks.

“The situation we’re in now, it makes you lick your chops,” Walton said. “You want to be in pressure situations when you perform your best to get where you want to be. Right now, we’re at the point where we’re embracing it all.”

For now, Michigan is in the tournament by just about every projection. But with a road game at Wisconsin and a home game against No. 8 Iowa still to go, that could go down. It also, however, could be a done deal with a win in either game.

“It’s good to be in that,” Beilein said of being on the bubble. “We weren’t in that last year at this time.”

“My stress level never goes down. It is always up,” he said. “The Elon games, and the games early in the season, that’s the way I live my life. It’s really an unfortunate part of my personality after over 1,000 games, but that’s who I am.”

That mindset is reflecting on his players too. Though the Wolverines have admitted that they are aware of where they stand, the goal ignore it and focus instead on what can fix everything — a win.

“Obviously, there’s pressure because every game does count. We need it,” Irvin said. “But you don’t want to put so much pressure on yourself that you don’t perform. So I just think everyone needs to take a deep breath and just relax.

“We’ve all been doing this since we were kids — just go out and have fun with it.”