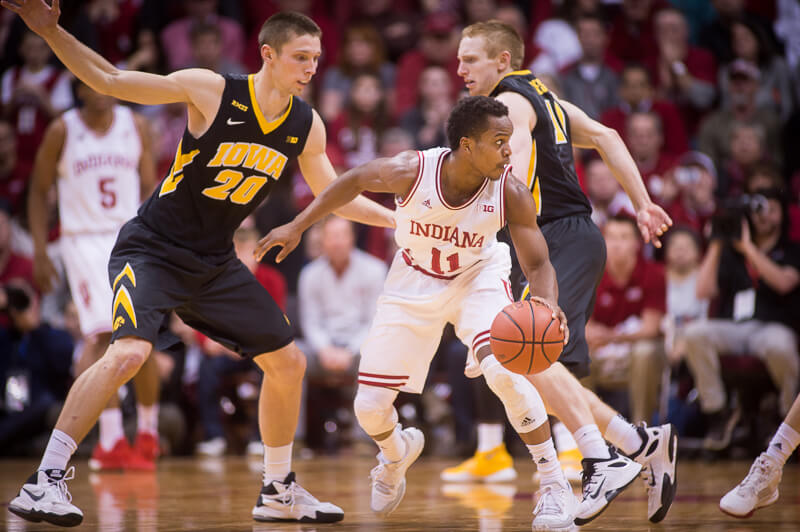 In this week’s Big Ten Power Rankings we examine Michigan’s interior defense and some of the Big Ten’s best shooters off the catch or dribble, best isolation players and much more.

Michigan State has seemingly reached another level and is bludgeoning every Big Ten team in its way as it closes the season with momentum.

The Spartans are the best three-point shooting team in the country (43.3%) and in Big Ten games (45.9%) thanks to the dynamic combination of Bryn Forbes and Denzel Valentine.

They are the best shooters in the Big Ten, according to Shot Analytics’ points above expectation metric, and they complement each other perfectly. Forbes is the conference’s best catch-and-shoot player and Valentine is the best shooter off the dribble.

You could make an argument that Greg Gard deserves a piece of Big Ten Coach of the Year honors, but I just don’t see how you can give the award to anyone other than Tom Crean. In December the Indiana fan base was busy brainstorming potential replacements after the Hoosiers were throttled in Durham after a disappointing 1-2 showing in Maui. When the Big Ten season rolled around, he lost his No. 2 scorer to a season-ending injury.

Now, with one week left in the conference season, his team needs just one more win to clinch an outright title.

Wisconsin’s offense recipe is clear: let Bronson Koenig and Nigel Hayes go to work. Koenig and Hayes average more isolation possessions per game than any other players in the Big ten despite the Badgers playing the slowest basketball in the conference.

While Wisconsin loves to isolate Koenig and Hayes, Purdue takes the old school approach and throws the ball into the post. AJ Hammons and Isaac Haas have a similar dominance of the post-up leaderboard. That’s especially impressive because Hammons and Haas rarely play together.

Melo Trimble leads a group of four guards that run almost 50% more ball screens than the next tier. That group also includes Minnesota’s Nate Mason, Northwestern’s Bryant McIntosh and Penn State’s Shep Garner. Trimble is the most effective of the lot, but Maryland’s significant reliance on Trimble’s pick-and-roll ability has meant that his recent drought has created major problems.

A couple weeks ago Iowa seemed like a lock to win a share of the Big Ten. Now the Hawkeyes have lost 4 of 5 including a loss at Penn State. A share of the Big Ten crown is still possible with a pair of wins and a bit of luck, but this sort of late season collapse has been a troubling trend of the Fran McCaffery era.

Many people have wondered why the Buckeyes are so far from the NCAA tournament despite 11 conference wins, but they just have too much work to do. To this point, Ohio State has played only one of the eight Big Ten teams with a positive efficiency margin twice (Maryland). Thad Matta’s team will have one more chance to build off of its quality win over Iowa, but it’ll have to come against a Michigan State team that won by 19 points in Columbus last week.

Michigan has work to do to make the NCAA tournament and its meager interior defense continues to make survival a chore. Big Ten opponents are shooting 55.3% on two-point attempts against the Wolverines — that’s the worst two-point defense in the conference, worse than Rutgers.

Here’s a visualization of the shots that Big Ten teams have attempted against Michigan in Big Ten play. A third of Michigan’s conference opponents’ shots have come within five feet and they are shooting 64%.

The scariest element might not be the 64% field goal percentage that Michigan allows at the rim, but the fact that a third of opponent attempts are within five feet. Michigan is usually giving up layup rather than forcing a difficult two.

For comparison, some of the Big Ten’s better defenses check in closer to 50%. Michigan State allows just 48% shooting at the rim in league play while Ohio State (52%), Wisconsin (54%) and Maryland (56%) are also solid on the interior in league play.

This week feels pivotal for Pat Chamber’s program. There’s no reason that Penn State can’t beat Northwestern and Illinois on its home floor and a pair of wins to close the season would qualify as some genuine positive momentum. I was always of the opinion that Penn State wasn’t as bad as its 2-8 conference start, mostly because it played 6 road games and one in New York City over its first 10 games.

Northwestern guards Tre Demps and Bryant McIntosh deserve some sort of award for how many minutes they have to play. Demps leads the conference in percentage of minutes played in conference games and McIntosh checks in at No. 3.

Michigan and Maryland are the only two teams with two guards in the top-10 leaderboard from KenPom.

The efficiency margin statistics continue to tell us that Nebraska should be better than its record, but the record has just never caught up. The injury to Shavon Shields seemed to throw everything out of whack for the Huskers, which have lost 7 of 9 games since winning at Michigan State.

Illinois picked up a home victory over Minnesota, but it has only won four games since its January 10th win over Purdue. All four were against Minnesota and Rutgers and the Illini needed 4 overtimes total to get the job done.

Minnesota appeared to have found some positive momentum with a two-game winning streak to snap an 0-13 conference start. Instead, the Gophers suspended three players — Kevin Dorsey, Nate Mason and Dupree McBrayer — for reportedly posting a sex tape on Twitter. Frankly, this season can’t end soon enough for Richard Pitino, who had just kicked Carlos Morris off the team a couple weeks earlier.

Rutgers has won five games against Division I teams this season and only one has a KenPom ranking better than 300: Farleigh Dickinson at 273. I’ll leave this as a homework question: Rutgers is the worst major-conference team since _______.