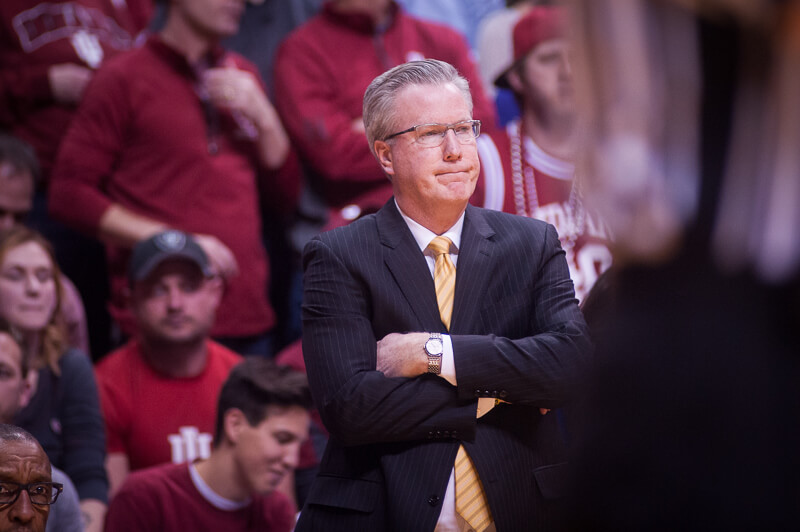 Michigan faces what amounts to a must-win to advance its NCAA tournament resume as it hosts Iowa on Saturday night.

When Michigan lost in Iowa City in mid-January, the Hawkeyes were one of the hottest teams in college basketball. Iowa had already swept Michigan State, had won at Purdue and would go on to put together a 10-1 start to conference play.

Then the wheels began to fall off in Bloomington. Iowa lost at Indiana and has now dropped five of its last six games. Now a team that once appeared to be a lock to win at least a share of the Big Ten in early February has plummeted out of the Big Ten Championship race. On paper, Iowa looks like a team searching for answers, but according to Fran McCaffery they’ve already turned things around.

“I think we already have,” McCaffery said after the loss at Indiana. “So I’m not worried about that at all. We played well, we lost to a really, really good team.”

This is a big game for Iowa as it tries to turn things around, but there’s even more importance for Michigan — which is desperate for a win to punch its ticket to the NCAA tournament.

Iowa is the second fastest team in the Big Ten, averaging 68 possessions per game, and manages to push the pace in games while avoiding turnovers. The Hawkeyes give the ball away on a league-best 14.6% of their offensive possessions. Iowa is scoring 1.11 points per trip, fourth best in the Big Ten, thanks to its league-leading ability to get to the free throw line (41.4% FTA/FGA).

Iowa allows 49.8% two-point shooting (10th) despite boasting the 4th best shot blocking team. The Hawkeyes’ 48.9 eFG% allowed (6th) is helped by a great three-point defense (31.7% allowed). Iowa’s defense has also been prone on the glass, where it allows opponents to rebound 32.3% of their misses — second worst in the Big Ten.

Jarrod Uthoff is no longer the favorite for Big Ten Player of the Year, but he’s still a tough matchup for Michigan. At 6-foot-9, 221 pounds, Uthoff is a versatile scorer, shooter and has the uncanny ability to block jump shots. He’s tough to handle because he can post-up smaller players, isolate bigger players and shoot over just about anyone with his length. He scored 23 points on 20 shots in the first meeting and is a very difficult matchup for Michigan’s wings or bigs.

Iowa has the luxury of playing not one, but two senior point guards in Mike Gesell and Anthony Clemmons. Both guards are good passers who value the basketball, while Gesell will run a bit more of the offense.

Gesell isn’t a shooter as he’s just 7-of-21 from three-point range in Big Ten play and shooting 40.4% on twos, but he’s a sneaky athlete and a plus-defender. He’s also one of the best guards in the Big Ten at getting to the free throw line.

Clemmons isn’t a great shooter either (15-of-47 on Big Ten threes), but he’s a better scorer inside (52% on twos) and is also great at getting to the free throw line.

Junior Peter Jok has emerged as an All-Big Ten caliber scoring guard this season. Jok has made 45% of his Big Ten threes (5th) on 101 attempts and is one of the league’s best at shooting the ball off screens (other than Bryn Forbes). Jok also ranks second in the Big Ten in steal rate and is an elite transition scorer with a 64.2 eFG% in transition situations.

Off the bench, Iowa can rely on Dom Uhl as a more versatile pick-and-pop threat. The 6-foot-9 German sophomore is shooting 52% from three-point range in Big Ten play, but just 33% inside the arc. He had 10 critical points off the bench in the first meeting.

Nicholas Baer comes off the bench and usually finds a way to make an impact. He’s not a high usage player, but he’s efficient when called upon. Baer is shooting 72% on twos in Big Ten play and 37% on threes.

Michigan actually led 52-51 midway through the second half of the first meeting, but was outscored 31-19 down the stretch. That’s been a familiar script for the Wolverines on the road this season and one they’ll hope they can flip-flop in Ann Arbor.

KenPom projects a narrow Iowa win, 76-75, giving Michigan a 48% chance at the upset.