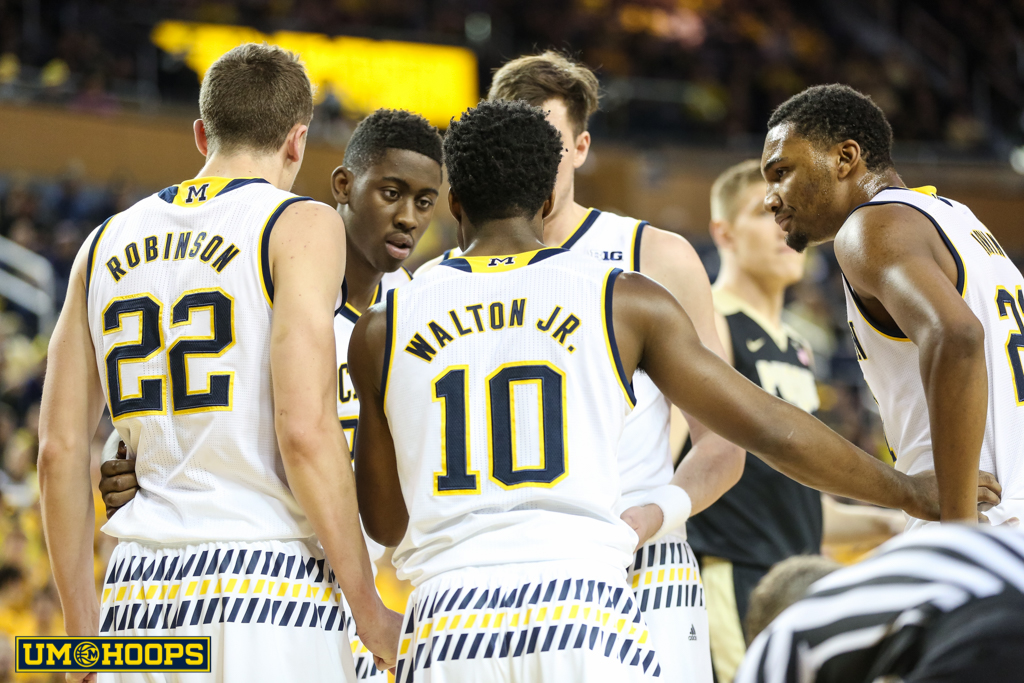 Sitting squarely on the bubble, the Wolverines (10-7 Big Ten, 20-10 overall) need a win over No. 16 Iowa on Saturday to ensure a spot in the NCAA Tournament.

With the days growing longer and classes put on hold, Spring Break provides college students with a chance to reflect, re-energize and renew their senses of purpose.

Not every college student seizes such an opportunity, but the Michigan basketball team doesn’t have much of a choice. Sitting squarely on the bubble, the Wolverines (10-7 Big Ten, 20-10 overall) need a win over No. 16 Iowa on Saturday to ensure a spot in the NCAA Tournament.

So with its most off days between games since December, no classes and one last chance to punch its ticket, Michigan looked inward, and hopes to emerge a better team against the visiting Hawkeyes.

“We’ve had time this week to catch our breath and get ourselves and try to fix what we can fix in a short period of time,” said Michigan coach John Beilein of the extra time. “It’s been good just for us to step back.”

Included in the reflection was extended film sessions on Iowa. The Hawkeyes (11-6, 20-9) look like a different team on paper — losing five of their last six games — but still start four seniors and carry many of the same characteristics that allowed them to beat the Wolverines, 82-71 on Jan. 17.

Michigan showed flashes of good play in Iowa City in January, but needs more to hang with Iowa again.

Fortunately for the Wolverines, there is still plenty at stake on Saturday. Michigan will have a chance to earn a tournament bid in next week’s Big Ten Tournament, but knows it must do everything it can to seal the deal in the regular season and avoid its fourth loss in five games.

Even without seniors on the floor, Beilein said he felt the Wolverines are taking ownership of what’s at stake, and used Spring Break as a potential springboard toward the end of the season.

“We know how important this game is,” said junior forward Zak Irvin. “If we win this, we pretty much have a spot in the NCAA Tournament.”

Added junior guard Derrick Walton Jr.: “This is the best part of the year. You don’t want to look back going into next year and years down the stretch that we didn’t give it our all to give ourselves an opportunity to be where we should be.

“Take this one for what it’s worth, really buy into it and give everything you’ve got into it.”

Going 3-5 in February to fall from Big Ten contender to bubble team, Michigan saw its shooting, ball control, transition game and defense all decline in effectiveness.

But with a break from the typical workload and a light at the end of the tunnel, the Wolverines should enter Saturday’s matchup as prepared and motivated as they can be.

“It’s all-go against Iowa,” Beilein said with a grin Friday. “I’m no bracketologist or follow the bubble like I once did. All I know is this has to be an extremely important game for us if we want to keep our postseason hopes alive.”