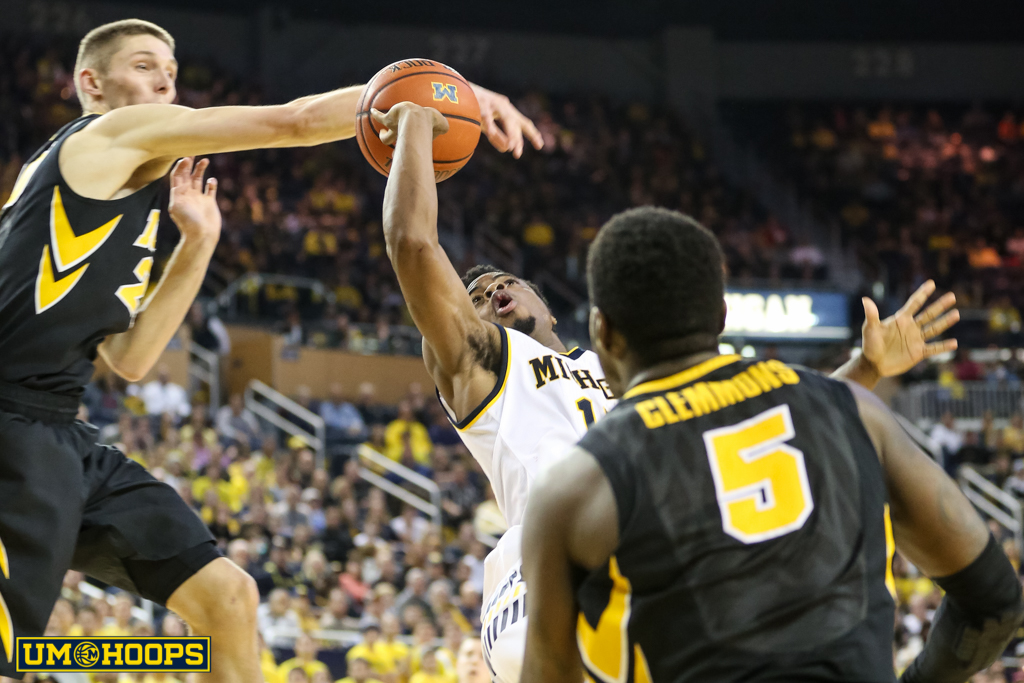 Michigan came up short against Iowa on Saturday night and will be playing for its NCAA tournament hopes in Indianapolis next week. Here’s what went wrong in the Wolverines’ third Big Ten home defeat.

When the schedule cards were printed this summer, March 5th was supposed to be a coronation for Spike Albrecht and Caris LeVert. Instead it shaped up to be a final exam for the new era of Michigan basketball.

The old guard was watching from the bench in suits as highlights of their NCAA tournament exploits played on the big screen as the new guard had a chance to play their way into the NCAA tournament on their home floor.

They came up woefully short.

Michigan didn’t play well by any stretch of the imagination, giving away possessions and falling behind early, and it was also clear from a few minutes of play that the Iowa Hawkeyes were the better team. Every Michigan run was answered by a critical Jarrod Uthoff jumper. Most Iowa runs were answered by a rushed shot or a poor possession as the game snowballed away.

The Wolverines don’t have a run-stopper and frankly just didn’t have the offensive firepower to score against an Iowa defense that had been beaten up over its last six games. Michigan made the inevitable runs that you expect from a home team in a conference, but it never led again after Duncan Robinson made a three-pointer on its first possession of the game to push the score to 3-2.

Both halves followed similar scripts as the Hawkeyes jumped out to double-digit leads before Michigan chipped away cutting the deficit to one or two possessions. But every time that the Wolverines narrowed the lead, Iowa made the plays to pull away.

The diagnosis of the Wolverines’ offensive woes is pretty simple. The Wolverines settled for jump shots all night and couldn’t make them. Michigan made 10-of-13 shot attempts within five feet of the basket, but was just 5-of-17 (29%) in the mid-range and 8-of-33 (24%) from three. John Beilein credited Iowa’s hard-hedge of the pick-and-roll for taking away much of his team’s production around the rim, but it was an all-around poor offensive performance.

It felt like there were close to a dozen possessions that Michigan just gave away with sub-pay execution, over-subbing, or poor shot selection. Michigan gave the ball away on baseline inbounds plays, fired up a handful of airballs and just had too many empty possessions in a game that was too important to afford any.

The only area of the game that Michigan controlled was on the backboard as it grabbed 28% of its missed shots and 89% of Iowa’s misses to outscore the Hawkeyes 15-4 in second chance points.

Defensively, Michigan had no answer for Jarrod Uthoff as the senior wing finished with 29 points on 19 shots to snap his recent slump of form.

Considering that the Wolverine defense has allowed 1.08 points per trip in league play, allowing 1.02 points per trip to Iowa doesn’t necessarily seem like a bad performance. It was Michigan’s defense that finally strung together stops in the first half and 1-3-1 zone turnovers in the second to narrow the gap in each half, but it was also the Michigan defense that made enough mistakes to never get over the hump.

Iowa got enough production in the areas where it’s most effective — Jarrod Uthoff jumpers, off-ball screens for Peter Jok and transition opportunities — to pull away with the win.

I don’t think this team has necessarily gotten worse over the course of the season, but it certainly hasn’t gotten any better.

Michigan isn’t the only team in the country that would limp to the finish line playing 7 of its last 9 games against top-50 opponents adjusted for strength of schedule, but it’s a legitimate question to ask why this team hasn’t been able to improve over a 31 game season.

It’s also an important one considering the entire roster that took the floor makes up next year’s team (plus four freshmen).

At this point, the Wolverines need to win their first game against Northwestern or Penn State and then come back on a day’s rest and knock off Indiana to make the NCAA tournament. After watching Saturday night’s performance, it’s hard to imagine that scenario unfolding in Indianapolis.