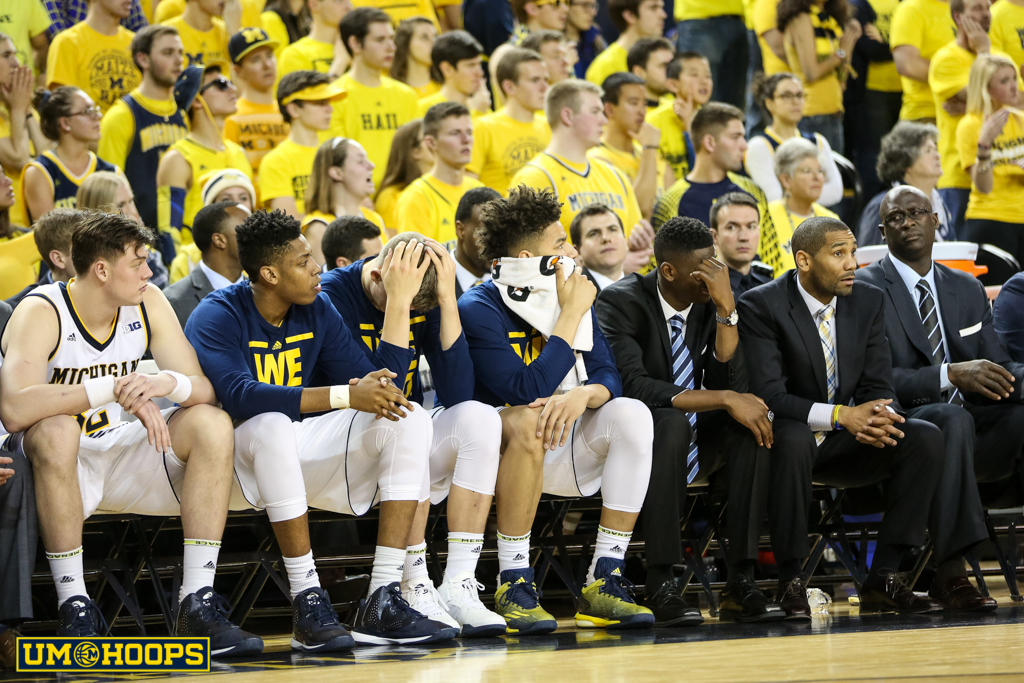 With one last chance to put a final stamp on its NCAA Tournament campaign before postseason play, Michigan looked like less of a tournament team than ever

The Michigan basketball team knew what was at stake. It knew what had to be done – to save the game and save the season — and why Saturday’s game against No. 16 Iowa was so important.

But with another slow start, another breakout performance by an opponent’s big man, another collection of failed fast breaks and hero ball 3s, another comeback that never came to a boil and, most importantly, another double-digit loss at home, the season wasn’t saved. In fact, the only thing that the Wolverines might have saved was the NCAA Tournament selection committee’s time.

With one last chance to put a final stamp on its NCAA Tournament campaign before postseason play, Michigan looked like less of a tournament team than ever. And with latest projections showing the Wolverines on the outside looking in of the field of 68, reality has set in that, barring an uncharacteristic push in the Big Ten Tournament, this team isn’t good enough.

Though a loss to Iowa, a team that blew No. 2 Michigan State out twice and looked like the class of the Big Ten until a week ago, is nothing to panic about, the way Michigan ended its regular season is. The Wolverines chucked up 34 3-point attempts, rushed possessions to beat the shot clock numerous times and showed the same defensive flaws that have been evident all season.

But the worst of it all came with about seven and four minutes to go in the second half. Riding hot shooting and Iowa’s struggles against the 1-3-1 defense, Michigan pulled to within five points both times. Both times, the Wolverines had a chance to take over in their own building, and both times, no one stepped up to lead the final charge.

Of course, the top two candidates to do so were in suits on the bench. Spike Albrecht and Caris LeVert are two-year captains and unquestioned leaders for Michigan, but have been relegated to bench duty most of this season. Players such as Derrick Walton Jr. and Zak Irvin have seen improved numbers and increased roles in that stretch, but are still a long way from matching the seniors’ ability to take control and win a winnable game.

“We missed them in every moment,” Beilein said of his seniors. “We missed them in the beginning of games, the end of games, in the locker rooms, in practice, we missed a lot of it. But we had to get over that, and we’re just trying to be true to these young men and do whatever we can for them. But those two were really good at making plays when things broke down, and that’s been an issue for us.”

Despite all the breakdowns, a glimmer of optimism for Michigan could be found when Iowa’s senior-heavy team calmly retook the lead in both situations. Like the current Wolverines, none of the Hawkeyes — even All-American candidate Jarrod Uthoff — entered the program as highly-touted, quick-fix recruits. Instead, they grew together until they became one of the best teams in the country.

Beilein said his team is making the same mistakes now as Iowa did two years ago, and still envisions the development that has built great Michigan teams in the past.

But Beilein’s talk about the process isn’t reality yet. The reality is that the Wolverines don’t have an NCAA Tournament-caliber resume; that they continue to lose in the same way without much improvement; that when push comes to shove, this Michigan team tends to fall back instead.

With its back to the wall more than ever before, Michigan does get one final chance to show improvement. It will likely need two wins in the Big Ten Tournament, but it’s a chance nonetheless.

“We have another opportunity,” Beilein said. “If we don’t do it, we don’t do it. But we have to address it. I’m not going to hide it from them. … I’ve always felt like we can get more work done at this time. That way, any question about us will be answered.”

And after Saturday, there are plenty of questions about this team. But only one answer is necessary, and it isn’t a secret.

The Wolverines still know what’s at stake and what has to be done to save their season. Now they must do it in reality, or else they’re just saving everyone time.