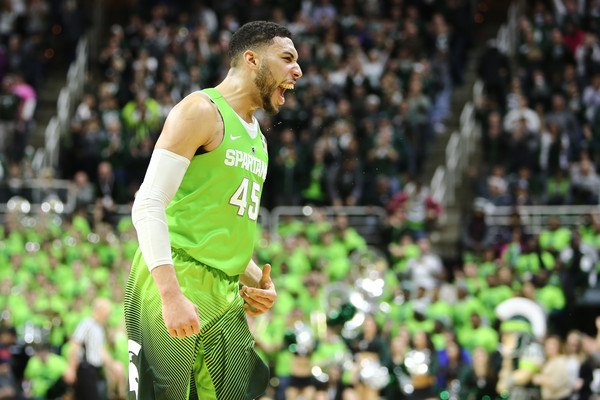 With the Big Ten regular season complete and all-conference teams expected to be announced this evening, here are our picks for the top performers of the 2015-16 Big Ten season.

With the Big Ten regular season complete and all-conference teams expected to be announced this evening, here are our picks for the top performers of the 2015-16 Big Ten season.

Valentine leads the league in scoring, assists and made threes per game. His per-game averages of 20.5 points, 7.8 assists and 6.9 rebounds are all fantastic. He scores at every level — inside, in the mid-range and from long distance –and is one of the elite off-the-dribble shooters in the country. There’s really nothing that Valentine doesn’t do for the Spartans and they’ll go as far in March as he takes them.

Ferrell will graduate from Indiana with a pair of outright Big Ten Championships and a heck of a lot of wins along the way. He finished the conference season averaging 17.8 points and five assists per game while knocking in 43% of his triples. As the best player on the best team, there’s probably an argument for Player of the Year that could be made, but Valentine’s numbers were just too good.

Uthoff scores all over the floor, blocks shots and draws fouls and finished second in the league at 19.2 points per game. He regained some of his early season magic on Saturday in Ann Arbor, dropping 29 points in the Hawkeyes’ win. He’s one of the most versatile scorers in the Big Ten and he can knock in jump shots from range or in the mid-range.

Hayes went through a few ups and downs as a junior, watching his shooting numbers regress — 54% on twos to 42% on twos, 40% on threes to 34% on threes — as he took a larger role in the offense. But his league-leading ability to get to the free throw line (62 FTA per 100 FGA) was effective enough to power Wisconsin to a turnaround season.

Coach of the Year: Tom Crean

Indiana fans were ready to get rid of Tom Crean in December and he lost his No. 2 scorer in December. From there he went on to win the Big Ten outright by two games. Greg Gard was great down the stretch at Wisconsin, but Crean won the league in a year when it felt like a foregone conclusion that the league title would go to Tom Izzo and the Michigan State Spartans.

Per 100 shot attempts, Bryn Forbes scores 33.7 points above expectation. That means that he’s 34% more effective than the average Division I player would be when attempting the same collection of shots. Only three other players tracked by Shot Analytics with over 75 logged shot attempts have topped that number on a per-100 shot basis and none come close to Forbes’ 309 attempts.

Over the last three years that we’ve been logging shots, Forbes pushes the limit for efficiency versus volume.

Costello rebounded 19.4% of Michigan State’s misses when he was on the floor and 27.4% of its opponents’ misses. Those statistics rank 1st and 2nd in the conference and Costello was among the most reliable big men in the country. He finished the season with 3 straight double-doubles

Happ averaged 12.2 points and 7.5 rebounds per game in league play and was the most consistent rookie big man in the league despite battling against five-star freshmen like Diamond Stone, Caleb Swanigan, Deyonta Davis and Thomas Bryant. Several other freshman bigs had huge seasons — there’s an argument to be made for Bryant — but Happ was the consistent and productive in the conference.

Purdue might not have ended up quite as strong defensively as many expected, but Rapheal Davis is one of the rare defenders that can completely change a game plan. He can negate a single player from just about any offense and he’s incredible on and off the ball for the Boilermakers.