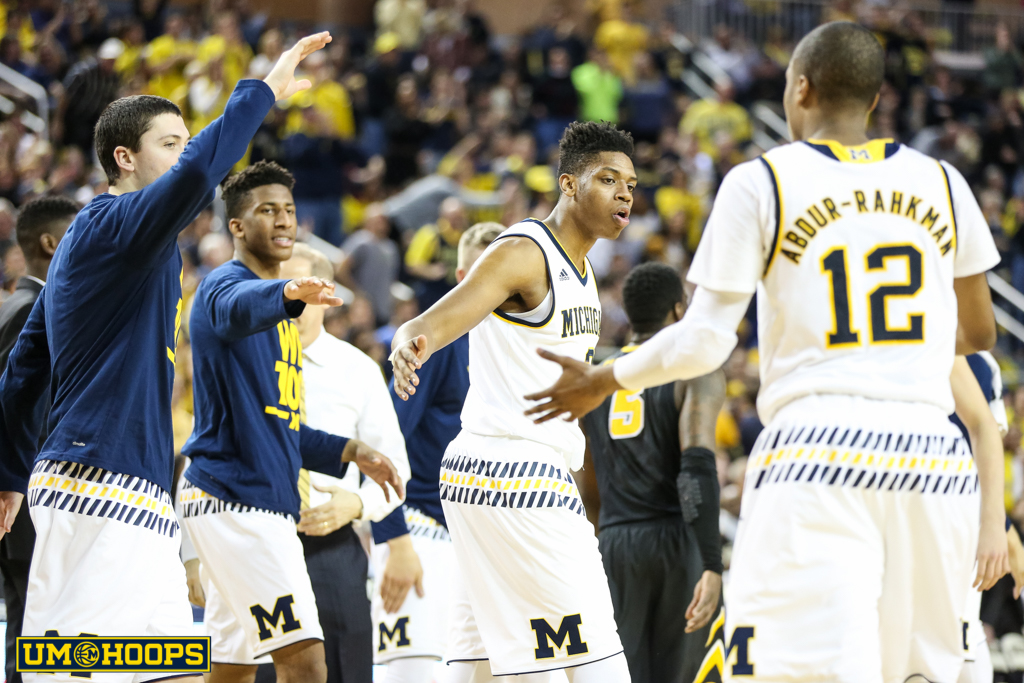 In the days following his team’s loss to No. 16 Iowa, Michigan coach John Beilein saw a shaken group of players.

The Wolverines had one last chance to clinch a tournament bid in the regular season and come up short. Michigan even mustered up two comebacks from double-digit deficits to knock on the door, but the Hawkeyes pulled away both times, pushing the Wolverines into a corner.

Not only did Michigan lose a winnable game, but it squandered its last regular season chance to fulfill its NCAA tournament aspirations.

“We were really down after that loss,” Beilein said on Tuesday. “We didn’t play well, we didn’t play smart, we didn’t do a lot of things. So we’re down, and watching the video yesterday even made us feel worse. But now we go out and practice and we say ‘Okay, it’s done. Let’s put it away and move forward.'”

Now on the outside looking in of the NCAA tournament field, most experts believe that Michigan must win two games in the Big Ten Tournament to continue its postseason push. That improbable journey begins Thursday at Noon, when the Wolverines (10-8 Big Ten, 20-11 overall) take on Northwestern in the 8-9 game of the conference tournament.

Losers of four of the last five games and fully understanding that a win over the Wildcats (8-10, 20-11) only sets the table for even tougher opponents, Michigan is looking for exceptional play that has been hard to come by in recent weeks.

Meanwhile, Northwestern has won three straight games games to close out the season since losing to the Wolverines on February 23rd, and finished with its first 20-win regular season in 98 seasons as a program.

“If you just look at the scores of their games and what they were doing, it didn’t surprise me at all to see (them get hot),” Beilein said. “Northwestern obviously has great challenges for us. The last few times we’ve played them if it didn’t come down to the last second, it went down certainly to the last minute.

“We’ve got our work cut out for us, and I’m sure they’re excited.”

The not-so-secret recipe to stopping the upstart Wildcats is for Michigan is to contain Alex Olah. The 7-foot senior forward has averaged 22 points per game in his last three games against the Wolverines.

Though a post presence hasn’t been a strong point for Michigan the past two years, junior forward Mark Donnal has thrived at times in Big Ten play, and said Tuesday that he felt prepared for any and all challengers in the postseason.

“It helps us having the experience of going against him,” Donnal said. “I think we have to make some adjustments, but I think we’re more prepared this time.”

Added Beilein: “(Olah) can get you inside just with leverage, but you can tell that he’s played years and years of basketball at a very high level. … He’s a challenge for us.”

Beyond Northwestern, the Wolverines must also overcome the challenge of fatigue. Beginning the season shorthanded and then losing seniors Caris LeVert and Spike Albrecht, Michigan has carried a thin roster throughout Big Ten play. Junior guard Derrick Walton Jr. is third in the Big Ten with 654 conference minutes played in 18 games, while junior forward Zak Irvin finished seventh with 634.

Both Beilein and his players have admitted in the past month that fatigue has taken its toll. But with nothing left to lose and virtually no margin for error, the Wolverines are forced to forget about fatigue.

“We’ll just throw it all out the window right now. Let’s win the game,” Beilein said. “And (after he first game), we’ve got to find a way. You’ve seen some great epic stories of teams (that make runs). … You’ve just got to find a way to do that, and we’ve got to just go and win one game, one day at a time.

“Whatever it takes, if it takes five guys going 40 minutes, we’ve got to do it.”

As the No. 8 seed in the 14-team tournament, Michigan has a daunting journey just to get to the two-win mark. If the Wolverines can beat Northwestern, they face top-seed Indiana — also ranked 10th in the nation.

The odds are stacked against Michigan picking up two wins in as many days. But in March, there are always exceptions.

“Things can happen in these tournaments,” Beilein said. “These things can just happen, you just get hot, there’s outliers out there. That’s what you go into these tournaments with, that hope. You hope that there’s going to be outliers, that guys are going to have incredible games, and that the ball ounces your way when it needs to.