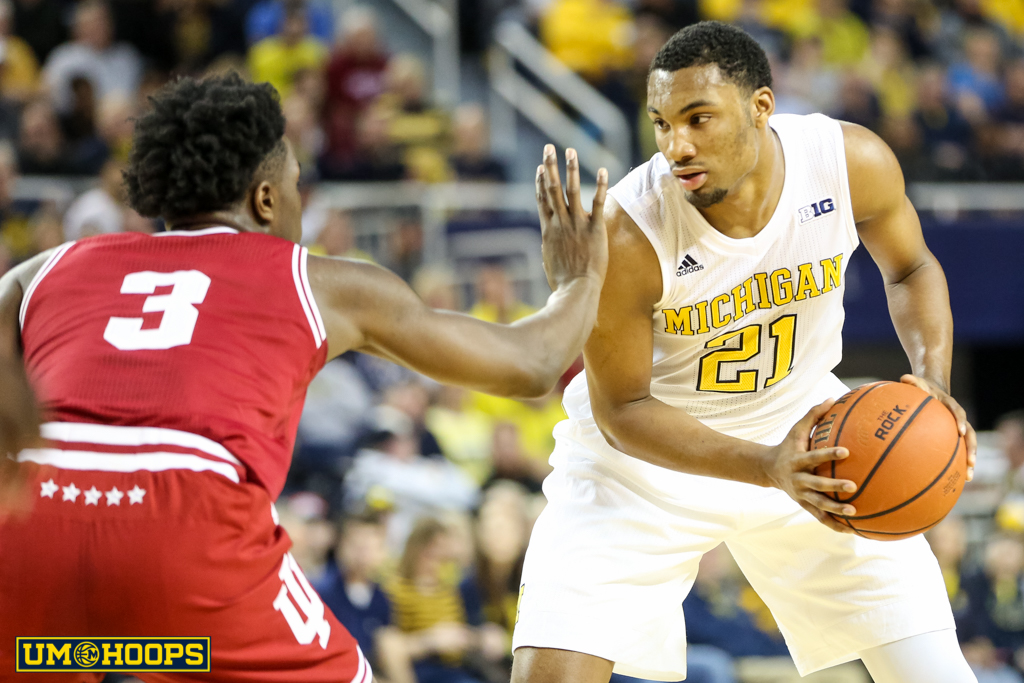 Michigan will be looking to upset Indiana at Bankers Life Fieldhouse and keep its NCAA tournament dreams alive at the Big Ten Tournament on Friday at noon (ESPN).

[Editor’s note: No game recap today, but here’s a preview for tomorrow’s game against Indiana]

It’s no secret that Michigan has come up woefully short in many of its biggest games against its best opponents. The Wolverines have shown flashes of steady-play, but have generally been undone by scoring droughts and defensive breakdowns.

In a season that has featured many such runs, none have matched Indiana’s 25-0 run to end the first half in Ann Arbor. The Wolverines unraveled as Indiana unleashed 10 minutes of perfect basketball. Since that game, Michigan has lost 5 of 9 while Indiana has caught fire to win the Big Ten outright by two games.

Now, playing in a pseudo-road game at Bankers Life Fieldhouse in Indianapolis, the Wolverines will try to return the favor and pull off an upset which could push them into the NCAA tournament.

Indiana is an elite offensive team and is only ranked second in the league in most offensive stats because of the spectacular performance by Michigan State down the stretch. The Hoosiers are scoring 1.16 points per possession in league play (2nd), but tout the nation’s fifth best offense according to KenPom’s adjusted offensive efficiency.

Indiana’s offense is that good despite turning the ball over on a Big Ten-worst 19.1% of its possessions.

The Hoosiers can score despite the turnovers because they generally only take layups, dunks or threes. Indiana shoots 54% on twos (1st) and 40% on threes (2nd) for a 56.2 eFG%. According to Shot Analytics, only 19 percent IU’s field goal attempts this season have been two-point attempts deeper than five feet.

The Hoosiers are also a plus-offensive rebounding team, grabbing 35% of their misses (3rd), but are just average at getting to the line, where they attempt 30 free throws per 100 attempts (10th).

Defensively, Indiana has improved steadily. After getting lit up time and again in the non-conference season, the Hoosiers have gelled into the conference’s third-best defense, allowing just 1.00 points per possession. Indiana is ranked just 8th in the league in eFG% defense, allowing opponents to shoot 49.1% on twos (8th) and 35.6% on threes (7th), but is ranked third in the league in defensive rebounding rate.

Yogi Ferrell would have been the Big Ten Player of the Year had Denzel Valentine not been out-of-this-world this season and the senior point guard is one of the league’s best. He distributes the ball, gets to the line and is a terrific three-point shooter, making 43% of his threes. His shooting numbers are impressive, but they are even more impressive considering how many attempts he takes off the bounce rather than the catch.

Troy Williams had all of the potential in the world, but he’s been woefully inconsistent. After a very rough stretch in early February, Williams has turned it around down the stretch. He’s been dominant in Indiana’s last three home games (averaging 20 points per game), but also has turned the ball over just 4 times in the last 4 games after giving it away 15 times in the five previous games. Williams is a great slasher, cutter and finisher and scored on a number of easy backdoor plays in the first meeting between these two teams.

Freshman big man Thomas Bryant is a force to be reckoned with down low. He can score with is back to the basket in the post, but he’s also a dominant rebounder and a plus-shot blocker. Bryant shoots 68% inside the arc, second best in the conference.

Michigan fans don’t need much of a briefing on Big Ten Sixth Man of the Year Max Bielfeldt. Bielfeldt was obviously a member of the Michigan program for the last four years and he’s settled in exceptionally well at Indiana. He’s hade 41% of his threes in league play and is also ranked third in the conference in steal-rate this season.

Freshman combo forward OG Anunoby locked down Zak Irvin in the first meeting between these two teams. He’s not always an efficiency offensive player, but he’s a game-changer defensively and seems to make plays all over the floor with his hustle.

Juwan Morgan played only nine minutes in the game in Ann Arbor, but he’s grown into a similar role as Anunoby – providing some defense, slashing ability and reliable offense in spots despite battling a shoulder injury.

Robert Johnson has been sidelined with injury at the off-guard spot. He’s shooting 38% on twos and 36% on threes in Big ten play, but is a plus-defender next to Ferrell.

Nick Zeisloft has played major-minutes in his place and is shooting 37% from three in Big Ten play, but he’s fired up 91 attempts. He has to be played and denied as a shooter all over the floor and you can’t help off of him.

KenPom projects a 78-72 Indiana win, giving the Wolverines just a 27 percent chance at the upset. Anything can happen in March, but the Hoosiers have been playing some terrific basketball down the stretch – winning 6 of 7 including wins over Maryland, Iowa (twice) and Purdue.