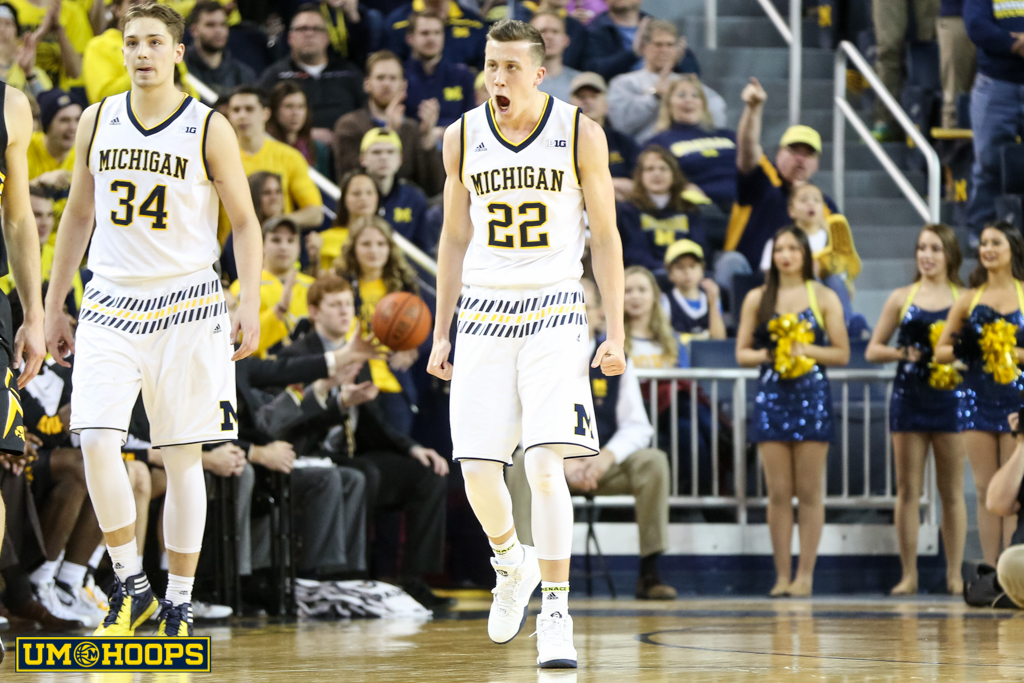 Michigan escaped Northwestern in overtime on Thursday afternoon and will have one more chance to punch a ticket to the NCAA tournament on Friday against Indiana.

With its back against the wall, the Michigan basketball team needed a response in the Big Ten Tournament to keep its NCAA Tournament hopes alive. An opening-round matchup against Northwestern was a good chance to do it.

The Wolverines didn’t wait long to respond, either. After an opening Wildcat 3-pointer, Michigan went on a 16-0 run to take control. Unfortunately for the Wolverines, the momentum didn’t last, as Northwestern chipped away at the lead throughout the game, finally closing the gap with three minutes to go.

And that’s when the fun started.

Closing the gap with three minutes to go, the two teams duked it out in a back-and-forth, overtime affair. With its season on the line and the clock waning, junior forward Zak Irvin hit a clutch jumper with just three seconds to go. It proved to be the dagger, as Michigan stayed alive, beating the Wildcats, 72-70 in the extra period.

Beating Northwestern gives the Wolverines (10-8 Big Ten, 21-11 overall) at least one more chance to clinch a postseason bid, taking on the conference’s top seed and No. 10 ranked Indiana on Friday.

Before that, here’s our immediate reaction from Thursday’s win.

MVP: Duncan Robinson. The redshirt sophomore forward had cooled off in recent weeks, averaging just 6.67 points per game in Michigan’s last six games. But Robinson was on fire in the first half, scoring 14 points. He had a quiet second half, but bounced back from missing the late free throw which eventually sent the game to overtime by nailing two three-pointers in the extra period. His 21 points tied a career high.

It was over when… It nearly looked over in the first half, when Michigan couldn’t miss en route to a 16-0 run and flirted with a first-round blowout. But the Wildcats chipped away at the lead throughout the game, finally retaking the lead with just over three minutes to go in the game. It looked to be over once again at the end of regulation, but Alex Olah corralled an offensive rebound and tied the game at the horn.

From there, it was a back-and-forth game. The game wasn’t over until junior forward Zak Irvin scored his 18th and 19th points on a jumper with 3.0 seconds to go to seal the win.

Key Stat: Though he started slow, senior forward Alex Olah ended the game with 20 points and 13 rebounds, once again dominating the Wolverines. In his last four contests against Michigan, the 7-foot Romanian is averaging 21.5 points per game, and nearly led to the Wolverines’ downfall in the second half.

Unsung Hero: Muhammad-Ali Abdur-Rahkman. Michigan had struggled to start games off on the right foot in recent weeks, falling into double-digit first-half deficits in three of its final five games. But the Wolverines were able to avoid it thanks to Abdur-Rahkman. The sophomore guard scored the team’s first eight points en route to 14 total points. He also chipped in eight rebounds and three assists, and served as an energy boost on both ends of the court.

Room for improvement: Michigan managed to win this game in spite of itself, but will have to play worlds better to beat Indiana tomorrow. Mark Donnal struggled with foul trouble in a woefully inconsistent performance. The Wolverines were outrebounded and just couldn’t make the critical plays down the stretch to ice away the win, even stepping out of bounds in the final second rather than dribbling out the clock. Tomorrow is another day, but Michigan will need to show improvement to keep its tournament hopes alive.