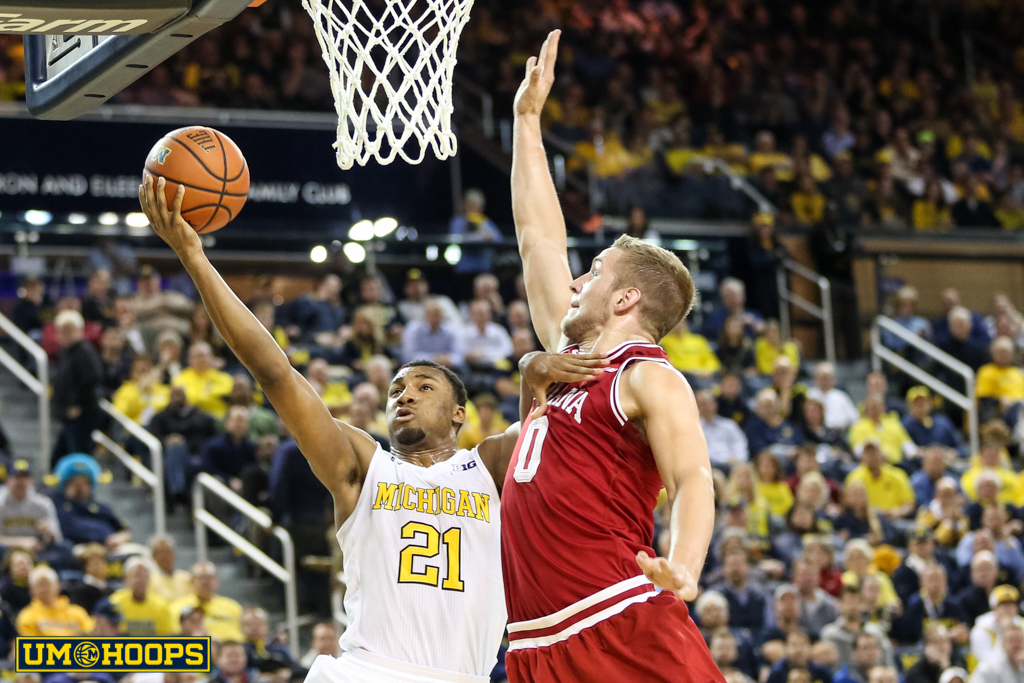 With a matchup against top seed and hometown favorite Indiana — the home-state team that he turned down on the recruiting trail — Irvin welcomes the opportunity to become the hometown villain.

INDIANAPOLIS — Zak Irvin is no stranger to Bankers Life Fieldhouse. Growing up in Fishers, an Indianapolis suburb 20 miles from the arena, Michigan’s junior forward has played there before in tournaments and other big games.

And despite a slow start to Thursday’s win over Northwestern, he looked right at home once again. Irvin finished with 19 points, eight rebounds and two assists. Now, with a matchup against top seed and hometown favorite Indiana — the home-state team that he turned down on the recruiting trail — Irvin welcomes the opportunity to become the hometown villain.

“I was amped up before the game,” Irvin said. “It’s always nice coming back to your hometown. Friends and family are able to see you play. I’m just proud of how hard we were able to fight and how resilient we were throughout the game. It was tough.”

For Irvin, it wasn’t too long ago that he dreamt of such a shot nearby.

“It reminded me of just being a little kid,” Irvin said of the shot. “Just shooting in your front yard, doing the 5-4-3-2-1 countdown. It was a great feeling to have.”

Though Irvin was the eventual hero of the game, he and his team still likely need to acquire one more win to earn a spot in the NCAA Tournament. That will have to come over the 10th-ranked Hoosiers. The last time Irvin faced Indiana in the Hoosier State, he scored 23 points, but is averaging just 6.4 points per game in his seven other appearances in his home state.

To Michigan coach John Beilein, a lot of that is learning how to funnel Irvin’s adrenaline into productive basketball, which he saw in Michigan’s win over Northwestern.

“He was playing with maturity to his game, and should be, as he has grown as a player at Michigan,” Beilein said. “That’s one of those next steps is that he has always been good in tough situations. But at the same time, when you’re coming back and playing the Purdues and the Indianas, or playing here in Indianapolis, there’s a little bit more on you, and I think he understands it much better than he might have done over the last couple of years.

“(His mindset should be) If I’m going to be a good player, I need to be able to respond in these things, and I will respond during this type of environment.”

Irvin finished with 19 points on 6-of-16 shooting, but grabbed 8 rebounds and handed out two assists in the victory over the Wildcats. It wasn’t always perfect, but it was his best offensive performance since the Wolverines beat Purdue in early February.

Irvin said after the game that he still stays in touch and plays with the Hoosiers’ six in-state players — including All-American candidate Yogi Ferrell, and that, though the former Mr. Basketball winner for Indiana has been a Wolverine for nearly three years, he still feels the hometown vibe when he returns.

“We all catch up, hang out, which is nice to catch up after a long season, but like I said, once you step on that court, there’s no friends out there.”

Of course, with Michigan’s season on the line, Irvin will have to play unfriendly once again.

He also might have to play the role of villain once again, but Irvin is right at home in that role at this point.

“It will be a tough game for us,” he said. “We just have to go back and watch the film. Because obviously they beat us pretty bad the first game but I know we’re all going to be ready for this one.”