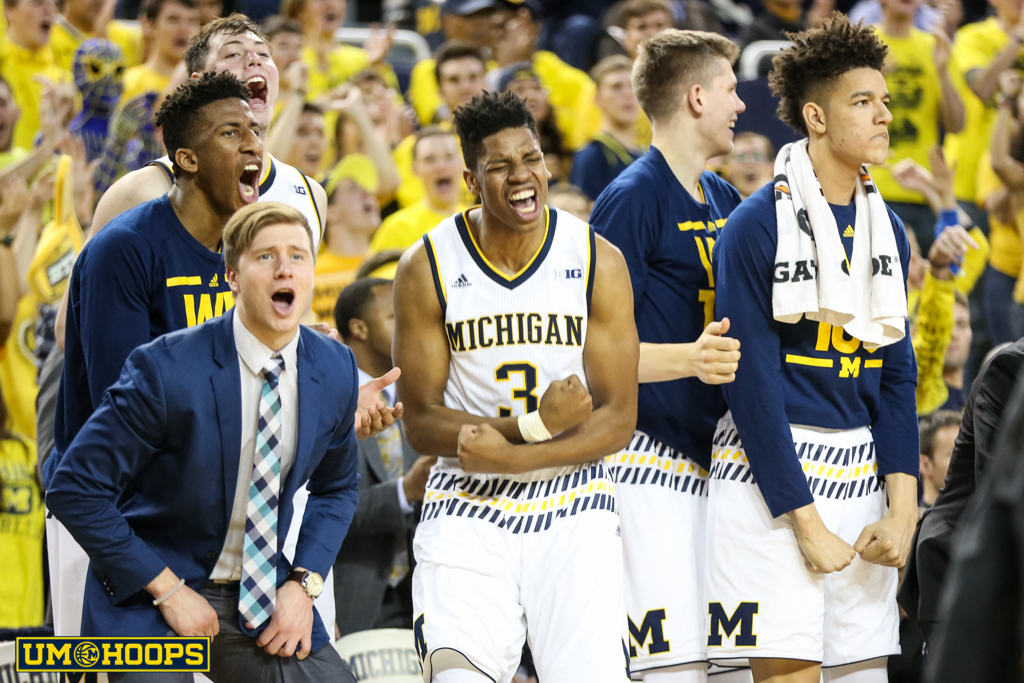 In a game where its leading active scorer, Derrick Walton Jr., mustered just three points and its second-leading scorer, junior forward Zak Irvin, struggled for most of the game, Michigan was able to count on role and bench players to pick up the slack.

When previewing the Big Ten Tournament, Michigan basketball coach John Beilein said that, if he had to, he would play all five starters for 40 minutes if it meant his team could get the wins needed to make the NCAA Tournament.

But in Thursday’s game against Northwestern, he couldn’t do that. Fortunately for the Wolverines, that wasn’t the only way for them to secure a win, either.

In a game where its leading active scorer, Derrick Walton Jr., mustered just three points and its second-leading scorer, junior forward Zak Irvin, struggled for most of the game, Michigan was able to count on role and bench players to pick up the slack.

“They’ve been making great plays in practice and making us work every day in practice,” Walton said. “So I’m just excited that they got the opportunity and they fulfilled it. They really helped us and gave us a spark when things started to die down and flatline.”

While the combined 35 points from Muhammad-Ali Abdur-Rahkman and Duncan Robinson were critical to the team’s success, the role-player boost didn’t end there. Though some had gone weeks without meaningful minutes, sparks came from a number of bench players Thursday.

Conventional wisdom may suggest that a shorter bench is important in do-or-die games, but Beilein did the opposite. When junior forward Mark Donnal ran into foul trouble, sophomore Ricky Doyle and freshman Moritz Wagner were there to pick up the slack. When Irvin was slumping, sophomores Aubrey Dawkins and Kam Chatman were able to knock down corner 3s to keep the offense flowing.

And when Walton was playing one of the worst offensive games of his career, junior Andrew Dakich came in and hit his first 3-pointer of the season.

Throughout the first half, Beilein could be seen franticly pacing the sideline, telling his bench to stay engaged. In recent weeks, the entire unit has done that, taking on the challenge to match the intensity of the starters.

“We always talk to each other before the game, just telling each other to be ready to go,” Chatman said. “You never know when coach is going to call you, so having that mindset from the beginning of the game to be ready whenever he calls you is really what we try to focus on.”

Added Doyle: “The past few weeks, the intensity level has been high. … Out practices have even been high-intensity, and we trust everyone in our locker room to go in and make the right play. We all know the same plays and when it comes down to the wire, we can all trust each other to do the right thing.”

Of course, the bench didn’t even need to make plays to be helpful. Irvin and Walton, who are seventh and third in the Big Ten in minutes played, respectively, are competing on worn-out bodies, and could use any break from carrying the load they can get.

Not only did Michigan’s non-stars help clear the path for a victory over the Wildcats, but spreading the workload around may help the Wolverines — who are tasked with taking on top seed and No. 10 Indiana less than 24 hours after their overtime win — fight fatigue and exhaustion when the season’s on the line.

“It just gives you an ease of mind going into the game that you ain’t gotta play the entire game for us to be successful,” Walton said. “We’ve got guys that can relieve some pressure off of us and make some plays themselves.”

To beat Indiana, Michigan will need Walton and Irvin’s best. But to get the best out of them, the Wolverines needed their bench to show up. Now, the entire team enters Friday with momentum and, more importantly, energy.