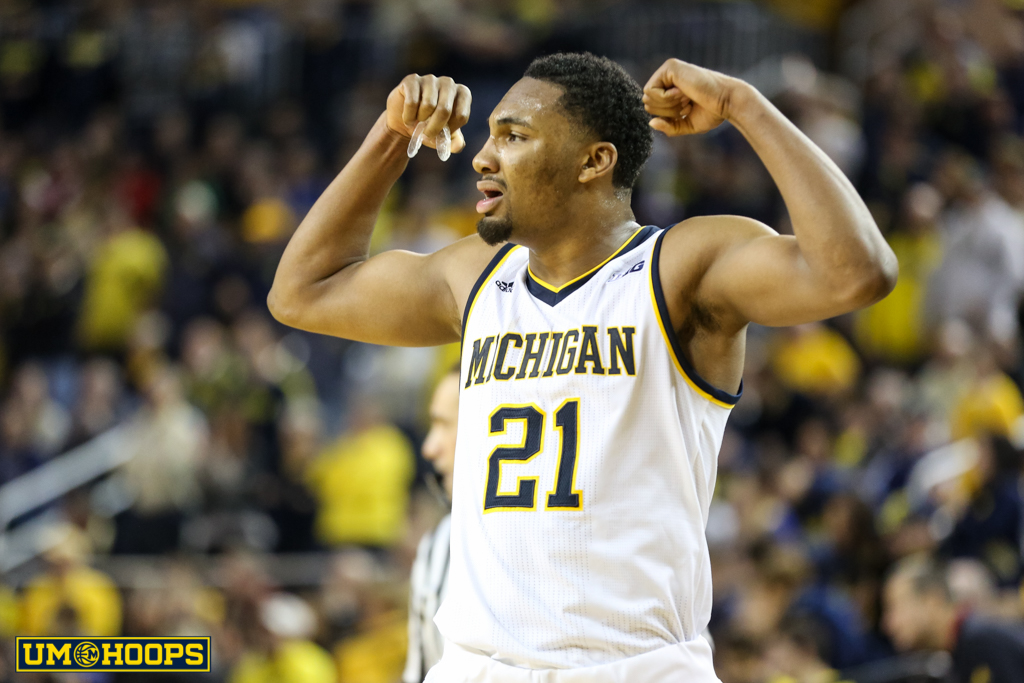 John Beilein, Zak Irvin and Duncan Robinson were on the podium after Michigan’s thrilling overtime win over Northwestern on Thursday afternoon at the Big Ten Tournament. Read the full transcript of their comments after the jump.

John Beilein, Zak Irvin and Duncan Robinson were on the podium after Michigan’s thrilling overtime win over Northwestern on Thursday afternoon at the Big Ten Tournament. Read the full transcript of their comments below.

COACH BEILEIN: Just a heck of a basketball game. Every time that we have played Northwestern these last few years, that’s been the game. They had a near miss at our place last year. We had double overtime at that game last year at their place. This year’s was very close with a minute left to go, a minute and a half left to go, and now this game today. So when there’s .6 on the clock, it was like, this cannot happen again. And I’m very fortunate — I was really proud of our kids for two reasons. Our defense was exceptional. We have been giving up about five or six extra easy baskets a year, and that’s really led to one of the highest defensive field-goal percentages we have ever had. And we showed that up today and did a great job against a team that has a lot of ways to score the ball. Demps can get 30, right. McIntosh, a brilliant point guard. And then Olah has become a really good player.

Q. Zak, you have been struggling a little bit. It looked like Coach Beilein went to there you at the end of the game. Was that play drawn up for you? And what is going through your mind?

ZAK IRVIN: Yeah. Coach B. put the ball in my hands. And what was possible or find our big man rolling. And you know, I just had enough space to let it go.

Q. Zak, can you talk a little bit about — you’re from the Indianapolis area, just talk about hitting the shot to win the game and kind of the hometown hero?

ZAK IRVIN: Yeah. I was amped up before the game. It’s always nice coming back to your hometown. Friends and family are able to see you play. I’m just proud of how hard we were able to fight and how resilient we were throughout the game. It was tough.

Q. Duncan, how did it feel to get your groove back a little bit? And then talk about the play setup for you to tie it with the three.

DUNCAN ROBINSON: Yeah. On that last play, Coach Beilein drummed that one up and because my teammate Zak made a great find on that and great screen by Ricky, I was fortunate enough to knock it in. But it was a good win for us, and I said that’s a really good team and good battle. And I’m looking forward to tomorrow.

Q. Zak, you guys led pretty much the whole game and then Northwestern got that lead. Just talk about the emotions going back and forth there before the overtime and in the overtime.

ZAK IRVIN: Like Coach B. touched on earlier, every time we play at Northwestern, it always comes down to the final seconds of the game. We knew that was going to happen. It was tough when Olah had to put back, but none of our guys had their heads down, which is great and how we play.

Q. Zak, another chapter at Indiana. Just talk about your thoughts on playing for the NCAA tournament?

ZAK IRVIN: We had a good win today, but we can’t enjoy it for too long because we know we have IU tomorrow. It will be a tough game for us. We just have to go back and watch the film. Because obviously they beat us pretty bad the first game but I know we’re all going to be ready for this one

DUNCAN ROBINSON: I’m just excited for the opportunity. Looking forward to a quick turnaround and putting forward a lot of energy tomorrow. And it will be a good challenge for us. We’re excited for it.

Q. John, can you talk a little bit about Zak, the way he played and coming home? Sometimes there’s a lot of pressure on a kid. Sometimes he doesn’t do so well, and other times he does pretty well. And he had a good game.

COACH BEILEIN: He was playing his maturity to his game, and should be, as he has grown as a player at Michigan. And that’s one of those next steps is that he has always been good in tough situations. But at the same time, when you’re coming back and playing the Purdues and the Indianas, or playing here in Indianapolis, there’s a little bit more on you, and I think he understands it much better than he might have done over the last couple of years. This is what it’s going to be. If I’m going to be a good player, I need to be able to respond in these things, and I will respond during this type of environment.

Q. Coach, Muhammad got you off to a good start, 14 and eight then, and even once he got rimmed out, just talk about his the play and the spark that he gave you earlier.

COACH BEILEIN: That was huge early. Because a couple of those were shot-clock type of situations. He had a huge drop-off to Ricky as well — or to Mark that was big in the game when we were really, really struggling. He has just really grown as well as a player. And I believe he had a big win in the left corner as well in the second half. So I have seen this young man, he played harder and harder every day. He is learning about things. He still has other things he has to get by. But he really has helped us in so many ways of just be a better basketball team overall.

Q. Coach, last time you played Northwestern, you said you kind of got caught off guard by manned defense that they brought out. They played man again today for most of the game. Did you change anything?

COACH BEILEIN: We did practice this time against a man, and what we tried to really do is just be sure, Tuesday was our practice and Wednesday was the day. But we have been running that man-to-man all year, so we don’t do too much with it that was different from what we were doing. But again maybe the synergy that everybody looks at says that our man offense or that our zone offense or the way we score against the zone is really good. And that zone defense they have has really paralyzed some teams. At the same time, we had to be ready for both. I’m not surprised by anything that Chris and his staff pull off right now. That is — I love Bill Carmody, and I heard Chris say, what a great thing for him to get done last night. And he is a great coach, and he didn’t leave the cupboard bare. But at the same time, Chris has known what to do with that talent, recruited great talent, and there’s going to be had a lot of those opportunities in the future where it’s a guessing game. I think Chris is brilliant young coach.

Q. John, you guys led by as many as 13 in the first half, led by nine at halftime. No lead is safe anymore in the Big Ten. Just talk about being able to hang on. And what did Northwestern do to come back and you guys able to win it?

COACH BEILEIN: That is absolutely right. Since the 30-second shot clock — the three-point has been here, but the 30 has changed even that part of it. We didn’t turn it over. We missed some shots, and they made some. I thought they outscrapped us a little bit today for some loose ones, and that gave them second opportunities. But all of a sudden, they made some threes and we missed some twos. And it can go so quickly from that point that, obviously, in the first half, a 13-point lead is absolutely nothing. In the second half a nine-point lead or 10 or whatever it got to be, if it’s in the last 10 minutes, it might be something. If it’s in the first, in what would be the third quarter, it’s nothing. It’s two shots. And then all of a sudden it’s a four-point game. That’s the way I live my life, worrying about those situations, worrying about gets the ball in bounds. And we got just enough done today.

Q. Coach, couple of things. You had a foul to give at the end of regulation. Did you think about fouling there? And were you waiting for a game like that from Duncan? Was it only a matter of time?

COACH BEILEIN: He just needed confidence. I said when he missed the big foul shots, that would have made it three-point game. They still could have tied it with a three, but I said we’re going right to you in the second, in this last half, and you’re going to make them. You’re good. So we had to do some of those things. Yeah, we had a foul to give on the regulation. I was really torn in that one. Once they’re in that situation where they’re coming down and you foul them and also they throw up a three and now we could lose the game. So our kids were aware of it. They were aware, we call it — I can’t tell you what we call it. If you’re looking and they back things out, you know, four or three, five seconds, you’re going to get it. But if they’re in action, that’s hard to go get that foul done.