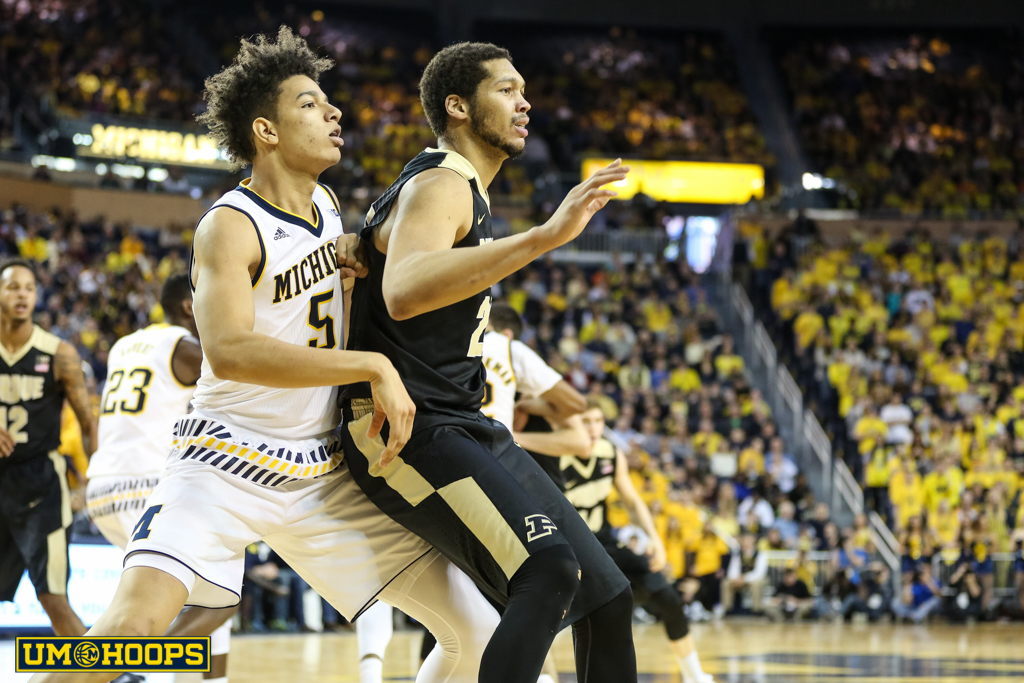 Michigan is looking for its third win in three days as it gets set to face Purdue just 24 hours after its buzzer-beating win over Indiana on Friday.

Michigan is looking for its third win in three days as it gets set to face Purdue just 24 hours after its buzzer-beating win over Indiana on Friday.

The Wolverines were downtrodden and defeated a week ago after losing at home to Iowa, but have found their footing in Indianapolis. Suddenly the NCAA tournament is an attainable goal, one that might have already been reached. If Michigan wants to remove any doubt, it’ll have to knock off the other Indiana team in Bankers Life Fieldhouse.

There aren’t many teams in the country constructed more differently than Purdue and Michigan. Purdue is massive, playing multiple big men and throwing the ball in the post more often than anyone in the country. Michigan plays four guards and won’t hesitate to have Zak Irvin guard Caleb Swanigan despite a 3 inch, 45 pound differential between the two.

In the first meeting in West Lafayette, Purdue’s size and physicality overwhelmed the Wolverines inside. In the second meeting, the Wolverines flipped the script and buckled down on defense to pull out a narrow home victory.

Purdue finished the conference season at 12-6, outscoring league opponents 1.13 to 1.04 points per possession. That ranks the Boiler offense 3rd in the league and the defense just 7th as what appeared to be a dominant Purdue defense in the non-conference season turned into an average defense in league play.

Purdue’s offense follows the generally reliable recipe of shooting the ball well and attacking the offensive glass. The Boilers shoot 50.8% on twos (4th) and 38.3% on threes (3rd) for a 52.9 eFG% (3rd) in conference games. Despite the solid three-point shooting percentage, only 31.8% (3rd fewest) of Purdue’s shots are 3PAs.

While Purdue does a great job of minimizing possessions on the glass — ranked second in offensive rebounding and first in defensive rebounding — but turnovers have had an inverse effect. Purdue gives the ball away 17.8% of its possessions (11th) or only forces giveaways on 12.4% of its league opponents (14th).

Purdue’s defense is ranked just 7th in the league and allows league foes to shoot 47.8% on twos (6th) and 34.4% on threes (6th). Those numbers are far lower than you’d expect for a Boilermaker team that has the sort of defensive players and shot blockers that Matt Painter has to work with. However, Michigan has shot the ball poorly in both meetings with eFG% marks under 47%.

Senior big man AJ Hammons has always boasted an impressive collection of size, strength and skill, but he’s finally put everything together as a senior. Hammons was named First-Team All-Big Ten and earned Defensive Player of the Year honors. He’s the most productive post-up player in the conference, and he’s ranked second in the league in block rate. He shoots 59% on twos this season and can even step out and knock in the occasional jumper.

Isaac Haas comes off the bench behind Hammons and provides more of the same. He has a massive frame, blocks shots, grabs offensive rebounds and scores with his back to the basket on the block.

Five-star freshman Caleb Swanigan has had an up-and-down season. He loves to attempt the occasional three, but is shooting just 27% from distance. On the interior, he’s the best defensive rebounder in the conference and he’s also shooting 52% on two-point attempts.

On the wing, Vince Edwards does a bit of everything. He’s shooting 48% on threes in league play and has made 9 of his last 14 long distance attempts over the last three games. His shooting ability, combined with his ability to pass the ball from the wing makes him a perfect option to pair alongside Purdue’s frontcourt because he can attack closeouts off of doubles down low via the pass, shot or drive.

Rapheal Davis is a game-changing defender. He eliminated Duncan Robinson from the first meeting and is capable of pretty much wiping any single player out of the offensive equation. Davis is shooting 40% on twos and 37% on threes in Big Ten play and Purdue is tough to beat if he’s hitting jumpers in addition to his strong defensive play.

Purdue will rotate between a few primary perimeter shooting threats in Dakota Mathias, Kendall Stephens and Ryan Cline. Mathias (44%) has been the best from three in league games while Cline is hitting 40% of his triples and Stephens just 30%.

Point guard minutes are split between PJ Thompson and Johnny Hill. Thompson, the recent starter, shoots 47% from three and does a great job of valuing the basketball. Hill isn’t a perimeter threat (1-of-7), but he’s a good setup man, defender and shoots 48% inside the arc.

KenPom gives Michigan a 29% chance at another upset, projecting a 75-69 Purdue win. A win would almost certainly cement Michigan’s spot in the NCAA tournament, but a loss could also leave the Wolverines with a long wait until the brackets are unveiled.