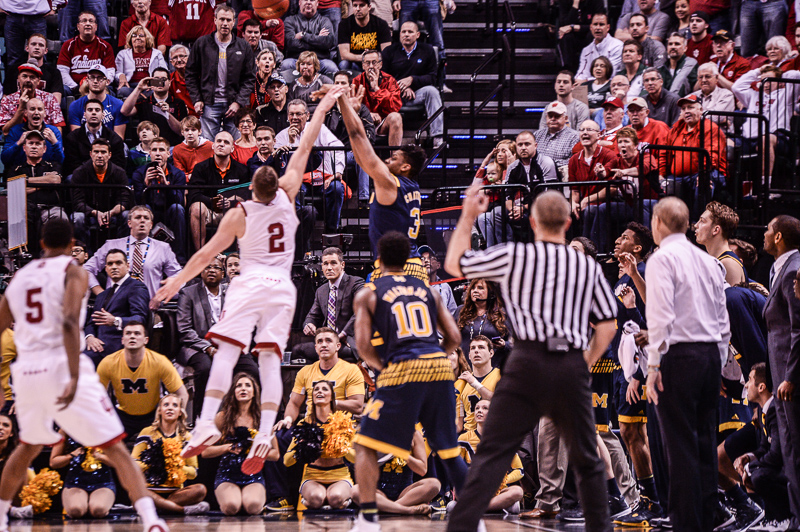 And in a dream-come-true moment for Chatman, the five seconds of opportunity he wasn’t supposed to have may have resuscitated his career.

He was supposed to be on the bench until Muhammad-Ali Abdur-Rahkman fouled out with 1:01 to go. When Derrick Walton passed the game-winning ball off to Chatman with four seconds left, Chatman was supposed to be Aubrey Dawkins — Walton just confused the two in the moment.

And when Chatman chucked up what would become the game-winner, his 2.8 points per game and 26.9-percent shooting percentage from three were supposed to catch up to him.

Thanks to one of the unlikeliest of heroes, the Michigan basketball team upset No. 10 Indiana in its home state, advanced to the Big Ten semifinals and kept its NCAA tournament dreams alive.

And in a dream-come-true moment for Chatman, the five seconds of opportunity he wasn’t supposed to have may have resuscitated his career.

“So proud of Kam Chatman here, who spent the first two years, a lot of time sitting down in the bench with us,” said Michiagn coach John Beilein after the game. “But he’s, yes sir, no sir, working hard every single day, trying to grow his game. And for him to be rewarded with that big shot, with that moment that he will always be remembered for, is worth it for me knowing he has done such a great job of handling all of his adversity.”

It was no secret that Chatman, once a five-star recruit, had struggled throughout his first two seasons at Michigan. He began his career as a starter, but plummeted down the depth chart due to a lack of decision-making, ball-handling or athleticism. This season, he is averaging just seven minutes per game, few of which came during meaningful moments.

But he was still young, 6-foot-8 and on a team ravaged by injuries, so Beilein stuck with him. Eventually, Chatman even gained the coaching staff’s trust, as he provided a first-half spark in the Wolverines’ near-upset of Maryland on Feb. 21 and moved into the eighth-spot of Michigan’s rotation thereafter.

Even with the upgrade, however, no right-minded coach puts Chatman in that situation for his first meaningful action in nearly two seasons. Fortunately for the Wolverines, Chatman had been there before. Sort of.

“As soon as he got it, I knew it was going in,” said Abdur-Rahkman. “He’s always hitting shots at the buzzer in (in-practice) games. He just has that fearless mentality.”

In his fall from prominence, Chatman had become something of a gym rat. Going to extra practices with Caris LeVert, battling Dawkins for minutes in practice and getting kicked out of the gym for overworking on his own, the sophomore saw a path back onto the court, and was determined to take it or fail trying.

So though he had done little to write home about all season, Beilein called Chatman’s name with Michigan’s season hanging in the balance. The Wolverines trailed by two with a minute left with NCAA tournament implications on the line, but they simply needed a body.

Instead, Chatman etched his name in Michigan lore, holding onto a pass Walton would later admit he wanted back for as long as he could before lobbing a corner three that not only went in, but may have put the Wolverines in the tournament as well.

“When you give to basketball, basketball gives back. We’re all so happy for him.”

“Nobody’s more deserving than him,” Dawkins said. “Just to persevere, to fight through everything he’s been through … you can’t teach that. His attitude to be great is unmatched.

“When you give to basketball, basketball gives back. We’re all so happy for him.”

Now a household name among even casual Michigan fans, Chatman has an opportunity to flip the script on his career in Ann Arbor. He can be the five-star prospect he was supposed to be, linger as a bench player, or form a new legacy altogether.

“The great thing about Kam is that he’s got a humble spirit,” said Michigan coach LaVall Jordan. “He knows what he needs to work on, he works his tail off, and he’s just stuck with us. And we stuck with him. So I was just happy for him to have that moment after a long process of just believing in each other.”

Where Chatman’s career goes from here is unclear, and where the Wolverines go may be even less clear. But on Friday, both were more than happy to bask in their glory, whether they were supposed to have it or not.

“I hesitated a little bit,” Chatman said. “But then I (saw) how much time was left, and I was like, ‘Oh, I’ve gotta shoot this one. And when it left, it felt good. When it went in, it felt good as well.”