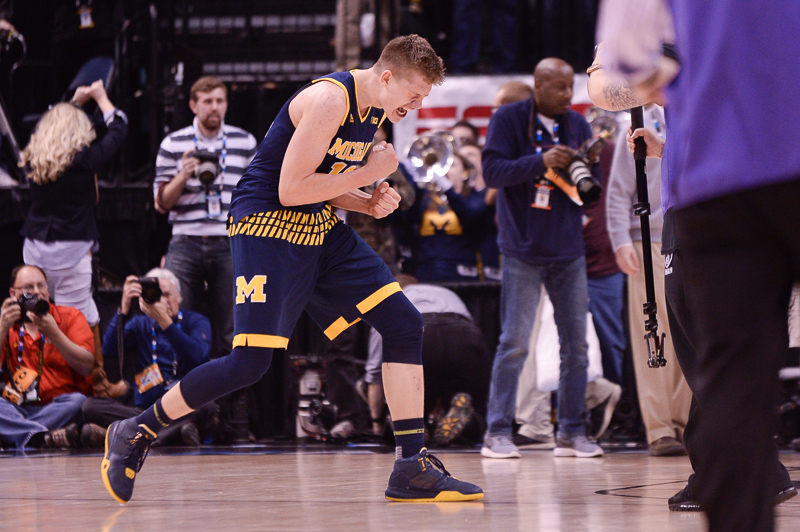 The 6-foot-11 big man spent the season as one of the team’s most gently-used players, but made the most of his 16 minutes Friday, scoring nine points — more than he had scored in the Wolverines’ previous 14 games combined.

On Thursday, it looked like Ricky Doyle had turned the corner. The sophomore forward felt like his old self again, had become more productive on both ends of the court. He hadn’t even missed a shot since Feb. 21.

But by Friday, with Doyle hobbled by injury, it was his backup that hadn’t even played since Feb. 21 that turned the corner.

With its season on the line in an unexpected win over No. 10 Indiana, Michigan got an unexpected boost from freshman forward Moritz Wagner. The 6-foot-11 big man spent the season as one of the team’s most gently-used players, but made the most of his 16 minutes Friday, scoring nine points — more than he had scored in the Wolverines’ previous 14 games combined.

“(Doyle) really didn’t feel he could go as hard as he wanted to, so Mo is our next man up,” said Michigan coach John Beilein. “The first play that I called wasn’t for him to shoot a three. It was a pop play for him to get it and just get space to get into a ball screen with Zak. And when he turned and shot, I shouted. I said, “What is he doing?” And, of course, that was his second on the year, I think. He is just that type of personality that expect the unexpected.”

His surprising surge came early in the first half, when starting forward Mark Donnal ran into foul trouble. For the first time since November, Wagner’s name was called first. And though he played just 16 minutes since Jan. 23, he insisted he wasn’t nervous.

“I’m always the nervous guy in big-time events, but on the court it’s different for me,” Wagner said. “I wasn’t biting my nails or anything like that.”

Though Wagner wasn’t nervous, Beilein might have been. It took Wagner all of two minutes after getting an opportunity to chuck up a 3-pointer. The freshman was 1 for 10 from deep all season prior to Friday, but felt the shot was right.

His coach, however, was less enthused.

From there, Wagner was not just a fill-in for Doyle, but an asset to the team’s success. As Indiana fans scrambled to Google his name and find out who he was, Wagner kept up with the Hoosiers’ fast-paced offense, and matched the intensity that Thomas Bryant brought. Every time Donnal had to come out, Wagner came in to provide a energy boost.

Whether he was driving to the rim, drawing free throws, forcing a jump ball with Yogi Ferrell, defending future NBA players or knocking down his second 3-pointer of the season, Wagner was a spark for the Wolverines — just as he has been in practice all season.

“Confident, loves the game, always has a smile on his face. That’s just who he is, and I couldn’t be happier for him.”

“That’s the definition of Moe right there,” Doyle said. “Confident, loves the game, always has a smile on his face. That’s just who he is, and I couldn’t be happier for him.”

Added Beilein: “He just brings so much energy. That’s why we have such high regard for his future right now. With strength, he just brings so much to the team. And I don’t know. There’s a lot of guys everybody likes. Kam and Mo are probably two of the favorite guys of everybody, coaching staff, everybody. He’s just all about the team.”

Saturday, Michigan will need Moe to be Moe, and maybe more against No. 13 Purdue. With two 7-foot forwards, the Boilermakers bully any and all challengers down low.

With or without Doyle — whom Beilein said was “hobbled” before the game against Indiana — the Wolverines are facing a vaunted Purdue front court that features more size and strength than Indiana, which still managed to rebound almost half of its misses. But after rocketing out of nowhere and helping guide Michigan to victory, Wagner has made it clear that expectations are out the window.