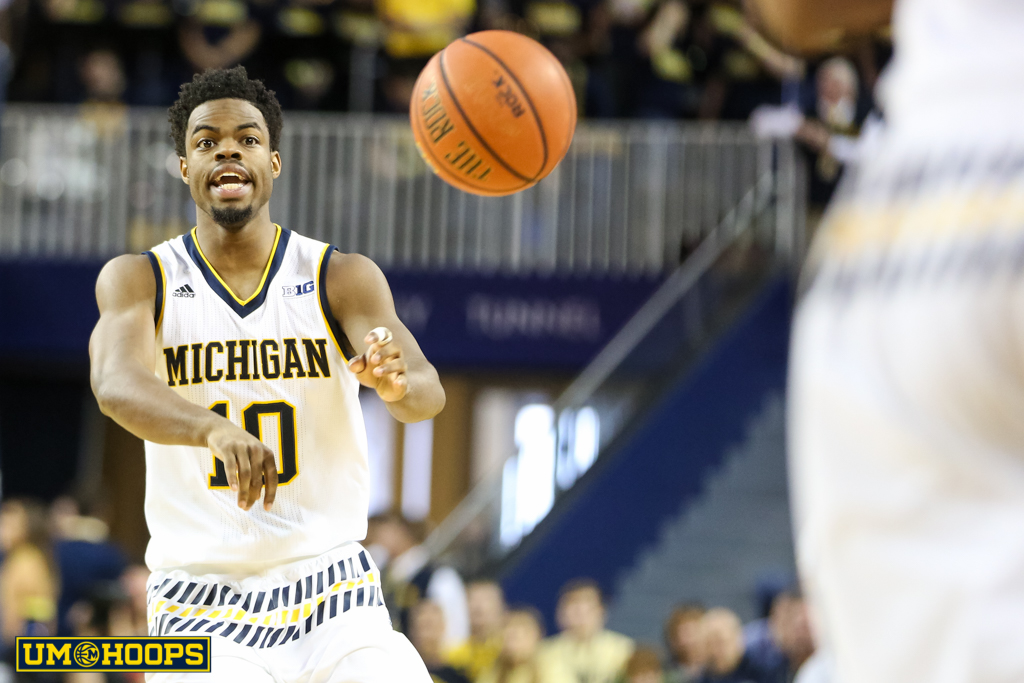 Michigan put up a fight against Purdue in Indianapolis on Saturday afternoon, but fell short down the stretch with its NCAA future hanging in the balance.

Michigan put up a fight against Purdue in Indianapolis on Saturday afternoon, but fell short down the stretch with its NCAA future hanging in the balance.

Purdue was too big, too strong and too effective inside for the Wolverines to handle. Michigan kept pace for the first 15 minutes, matching Purdue’s points in the paint with jumpers on their end of the floor, but eventually the shots stopped falling and the Boilermakers pulled away.

The Wolverines will look back on this game and realize that it was lost in the final two minutes of the first half and the first four of the second half. Michigan trailed 36-30 with 2:23 to play and missed four opportunities to close the gap — a missed layup, two missed threes and a missed jumper — entering halftime down 8. In the second half, Purdue put the game away as the Wolverines missed their first 6 shots from the floor and suddenly found themselves down 17 points.

Michigan showed some great fight in the second half, cutting the lead to 6 points on a coast-to-coast and-one layup for Derrick Walton, but the damage done in that six minute stretch was irrecoverable.

Michigan’s offense just didn’t have enough juice to win this game. Purdue is a good defensive team, but this was Michigan’s worst offensive showing of the season at .87 points per possession.

The Wolverines actually got off to a hot start, scoring 25 points in the first 21 possessions of play (1.19 PPP), but managed only 34 in the final 47 offensive possessions of the game (.72 PPP). Tired legs undoubtedly played something of a role — Michigan was in its third challenging game of the week while Purdue slept walked past Illinois yesterday — but U-M just couldn’t make shots. The Wolverines shot just 47% inside the arc and 24% from the perimeter for a 42.6 eFG%. Michigan actually shot the ball worse in its win over Purdue this season, but 3 of its 7 worst shooting nights have come against the Boilers this season.

On the defensive end, John Beilein opted to stick with the recipe that worked in Ann Arbor: single coverage against Purdue’s bigs. It didn’t work as well this time around. AJ Hammons scored 27 points on 11-of-17 shooting while Isaac Haas had 11 in 9 minutes and Caleb Swanigan added 7. On the game, Purdue shot 25-of-43 (58%) inside the arc and outscored the Wolverines 44-28 in the paint.

Beilein said that Michigan stuck to that plan because a) it worked in Ann Arbor b) there was only 24 hours of prep and c) Purdue had been shooting the ball extremely well from three. The Boilers only made 4-of-12 three-point attempts — compared to the 9-of-18 they made in West Lafayette when the Wolverines doubled — so the approach did work in that regard, but Hammons was dominant all night.

Selection Sunday — the inaugural two hour version (5:30 p.m., CBS) — is a little over 24 hours away and it will be a long wait for Michigan, which will watch the show together in their film room. The Wolverines are projected as one of the last teams in the field and will have to hope that no bids are stolen in conference championships. Should Michigan make the field, a Tuesday or Wednesday night game in Dayton appears to be inevitable.