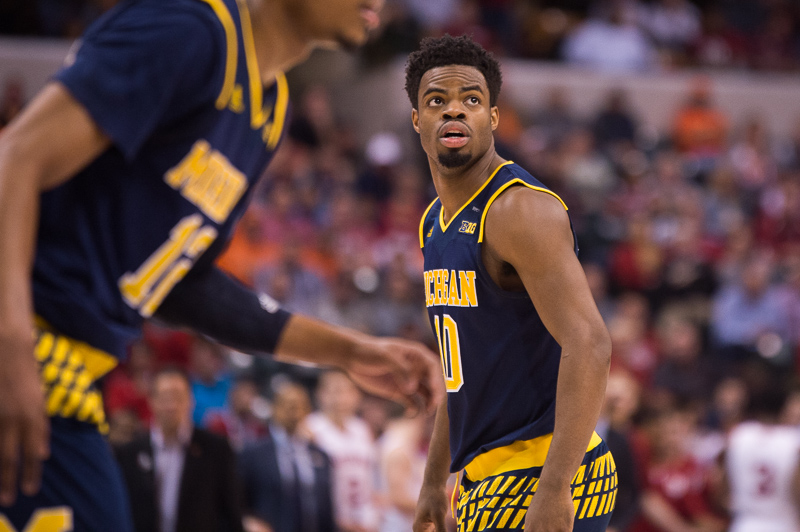 With one last chance to come back in Michigan’s one last opportunity to secure an NCAA Tournament bid, Walton — who had been 0 for 11 shooting through two and a half games in the Big Ten Tournament — led the charge. It was ultimately a futile effort, but Walton’s growth was unmistakeable.

INDIANAPOLIS — Few players could go from one of the worst shooting slumps in their careers to leading a postseason comeback push with one flick of the wrist.

With one last chance to come back in Michigan’s one last opportunity to secure an NCAA Tournament bid, Walton — who had been 0 for 11 shooting through two and a half games in the Big Ten Tournament — led the charge. It was ultimately a futile effort, but Walton’s growth was unmistakeable.

The junior had struggled with assertiveness after being thrust into a leadership role when the Wolverines’ seniors suffered season-ending injuries. But even when his shots weren’t falling, Walton looked like a new leader in Indianapolis, giving Michigan a spark for the weekend and the future.

“He started taking command of this team,” said junior guard Andrew Dakich, Walton’s backup. “It was a big step for him moving forward, because we knew he had it. … He was facilitating great and controlling the game. I feel like that’s why we had the success that we had those first two games.”

In previous points in his career, a slumping Walton would have had a tough time leading Michigan to any semblance of success without making any shots. But the guard has developed into an elite passer and rebounder — averaging 7.33 assists and 5.33 rebounds per game in the three-game tournament run.

To his credit, Walton has always been a talented player and a leader by example. But a less tangible metric of success, Walton’s assertiveness, had been a focal point during the season. Beilein had mentioned it as a work in progress during Big Ten play, and Dakich recalled he and Spike Albrecht prodding Walton to be more aggressive as a leader in practice.

In Indianapolis, the progress came to fruition.

Throughout the Wolverines’ run in the Big Ten Tournament, Walton would tugging on struggling players’ jerseys to get their attention, frantically call and switch plays, gather teammates in rough stretches and was routinely the first one into the huddle during a timeout.

“Just knowing that this team needed some guidance and leadership at this point, who other to do it than the point guard?” Walton said.

Walton was an effective leader with an ineffective shot on Thursday and Friday, but that wouldn’t cut it Saturday. The Boilermakers had secured the advantage in the post and Michigan’s regular 3-point specialists were out of sync. So with Purdue pushing its lead into the high teens, Walton chucked up a contested 3-pointer.

It went in, and Walton was off to the races.

For the next six minutes and 25 seconds, Walton nearly brought the Wolverines back from the brink by himself. In 10 possessions, Walton tallied 10 points, three assists, two steals and two rebounds as Michigan narrowed the gap from 16 to six.

A blowout had become a ballgame, but it didn’t last. Purdue was too big, too good on defense and, though none of the Wolverines would admit it was a factor after the game, too well-rested. While Michigan gutted out 85 minutes of basketball in the two days prior, the Boilermakers wrapped up the meaningful part of their 31-point win over Illinois in 15 minutes. Walton himself logged 38.0 minutes per game in the tournament.

But even as Purdue pulled away, Walton was there; tugging jerseys, calling plays and going toe-to-toe all over the court with whoever he was matched up with.

“That’s his attitude,” said Walton’s backcourr-mate Muhammad-Ali Abdur-Rahkman. “He wasn’t going to let not making shots affect him. Even though he started making shots again, that attitude definitely helped him.”

By the end of the game, Walton had lit up the box score to the tune of 14 points, six rebounds, five assists and three steals.

But he also lit a fire within his team, and though it didn’t result in a complete comeback, it showed a new side of Derrick Walton — the captain’s side.

“We’ve always stressed to him that he needs to take control on the court,” Dakich said. “Obviously coach Beilein can’t be out there, so he needs to be that second coach.

“He a great job with that this week, and hopefully we get another chance here soon.”