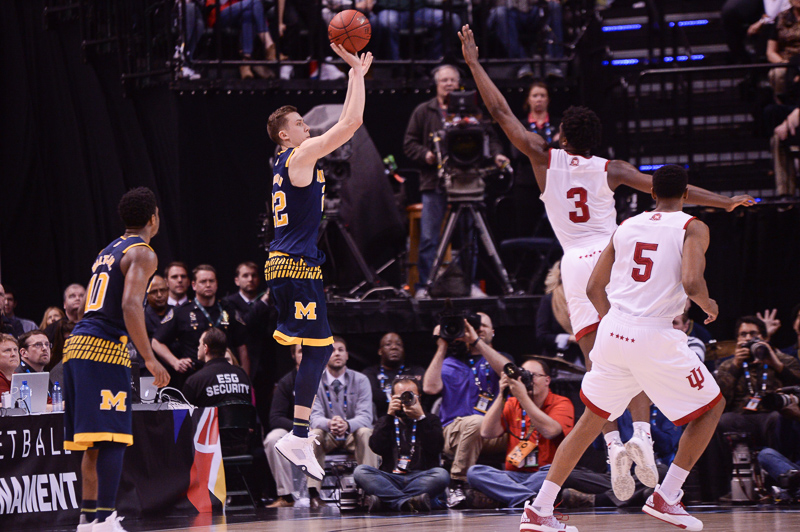 With 22 wins, four over top-25 teams, and a good showing in a strong Big Ten Tournament, the Wolverines feel that they belong in the NCAA Tournament.

Following a 74-59 loss to No. 13 Purdue, the Michigan basketball team is back in the NCAA Tournament bubble picture, calculating good wins, great wins and other teams’ wins to see if it’s worthy of a bid to the dance.

It’s stressful, but if you ask the Wolverines, it shouldn’t be.

After feigning diplomacy and citing respect for the committee’s decision, Michigan couldn’t help but weigh in on their belonging in the big dance. With 22 wins, four over top-25 teams, and a good showing in a strong Big Ten Tournament, the Wolverines feel that they belong in the NCAA Tournament.

“I don’t think that should hurt us.”

Of course, the main knock against Michigan is that it didn’t perform especially well against those elite teams. While a 4-11 record against top-50 RPI teams isn’t bad, its only game against a team in the 50-100 range was at Ohio State, meaning the Wolverines are a brutal 4-12 against RPI top-100 teams.

But after a loss in the semifinals to No. 13 Purdue, Beilein pointed out that such a record is skewed.

“If we’re in, we’ll get in because the committee understands that we battled the diversity. We won 22 games. We won on the road. We beat four top-25 teams, that we’re a good team.”

Michigan certainly looked that way against Indiana on Friday. Even without its seniors and two-year captain Caris LeVert and Spike Albrecht, the Wolverines looked poised and talented in all areas, closing out a win over the Big Ten regular-season champions in the Hoosier state.

“If anybody thinks that game against Indiana was a neutral site, you weren’t here,” Beilein said. “That’s what people are looking for, those great road wins. Indiana as you can see, is an elite team, and to beat them shows we can play with anybody. They could win the national championship.”

With the win, many thought it would be enough, but to the “bracketologists,” Michigan is still sweating it out with the likes of Monmouth, St. Mary’s, Temple, South Carolina and San Diego State.

And to the Wolverines, that isn’t right.

“The Committee’s gonna do what they want to do, but I think personally, we deserve to be that kind of team,” said junior guard Derrick Walton Jr. . “Of course we’d be devastated (if they didn’t make it), because this team is definitely capable of playing in that Tournament. We just gotta roll with the punches.”

Added sophomore guard Muhammad-Ali Abdur-Rahkman: “The Big Ten’s a great conference, the second-best or best in the country, so we’re playing tough teams day in and day out. I think we’ve proven ourselves, a little bit — that we can play with anybody.”

In the end, the great wins Michigan left on the table throughout the season hurt, as does playing in a conference with two teams outside the RPI top 200. And though the Wolverines feel that they deserve a shot, they are left waiting like everyone else until CBS’s selection show at 5:30.