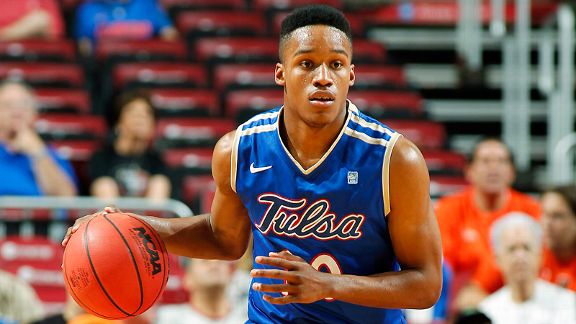 Michigan will face Tulsa in a First Four showdown in Dayton on Wednesday night for a chance to play Notre Dame in Brooklyn on Friday night.

Here’s a first look at what the 11th-seeded Golden Hurricane brings to the table.

Michigan will face Tulsa in a First Four showdown in Dayton on Wednesday night for a chance to play Notre Dame in Brooklyn on Friday night.

Here’s a first look at what the 11th-seeded Golden Hurricane brings to the table.

Tulsa is located in Tulsa, Oklahoma with an enrollment of 4,352 full-time students. The Golden Hurricane features a super hero mascot named Captain Cane. Head coach Frank Haith is in his second year with the program, missing the tournament last season despite a 14-4 AAC record. Haith has been accused of improper recruiting tactics at his last two stops, Miami (FL) and Missouri.

The Golden Hurricane went 20-11 (12-6) this season, but was expected to be left out of the field after losing to Memphis by 22 points in its opening game of the AAC Tournament. All 59 bracketologists included in the Bracket Matrix omitted Tulsa and Frank Haith found out via a tip while driving to campus for a team meeting.

Tulsa’s resume was built on a quality non-conference win over Wichita State and conference splits against UConn and SMU — two teams that beat Michigan.

Tulsa is the most experienced team in the country according to KenPom.com. The Golden Hurricane starts four seniors and a junior, with a couple more seniors coming off the bench. Sterling Taplin is the only underclassmen in the the rotation.

That lack of size has also manifested itself in a below-average rebounding team. Tulsa rebounded only 27.9% of its misses (234th nationally) and allows opponents to grab 30.4% of their misses (210th nationally).

The Golden Hurricane also has won the turnover battle this season, giving the ball away on just 15.5% of its offensive possessions (26th) and forcing giveaways on 20.6% of its opponents possessions (44th).

There are only nine teams in the country that create extra possessions more effectively via the turnover.

The Hurricane is also vulnerable in transition, when the opportunities are there. Teams are scoring 1.06 points per possession in transition against Tulsa, ranked in the 31st percentile nationally.

Tulsa is just 7-11 when it allows its opponent to score a point per possession or better, but undefeated 13-0 when it holds them below a point per trip. Tulsa doesn’t block many shots, but grades out favorably in interior defense despite its lack of size.

Tulsa is shooting just 32.9% from three-point range and grades out in the just the 15th percentile nationally with a 46.5 eFG% in catch-and-shoot situations, per Synergy Sports.

James Woodard (36%) and Pat Birt (37%) are the only Golden Hurricane players to shoot better than 35% from three-point range and both players attempt almost twice as many threes as twos. Together, they account for almost 75% of Tulsa’s made three-pointers this season.

The Golden Hurricane aren’t much better at defending the three. Opponents shot 36.3% from three-point range against Tulsa this season, just 260th in the country.

Tulsa is one of the few teams that seems to do as poor of a job contesting catch-and-shoot shot attempts as Michigan. Tulsa opponents have a 54.5 eFG% in catch-and-shoot situations, ranked in just the 17th percentile nationally per Synergy.

Roughly 29% of Tulsa’s offensive possessions are derived from ball screen action, per Synergy Sports, and it grades out in the 82nd percentile nationally at .932 points per ball screen (including passes).

6-foot-3 senior Shaquille Harrison runs the majority of Tulsa’s ball screens, and he leads the AAC in assist rate while averaging a team-high 4.1 assists per game. Harrison isn’t a perimeter threat (4-of-40 from three), but he can score at the rim (50%) and get to the free throw line (55% FTA/FGA).

Harrison has ran over twice as many ball screens as James Woodard, but Woodard is far more efficient in the pick-and-roll game thanks to his ability to shoot off the dribble.

Tulsa is ranked 58th by KenPom and his metrics call this game to be almost a toss-up, but it feels like a good match-up for the Wolverines. Tulsa won’t exploit Michigan’s size issues at the four, won’t beat Michigan up inside and struggles to defend the three.

After limping to the finish line on the offensive end of the floor, Tulsa’s average defense could provide the sort of fresh start that Michigan’s offense needs in the NCAA Tournament.