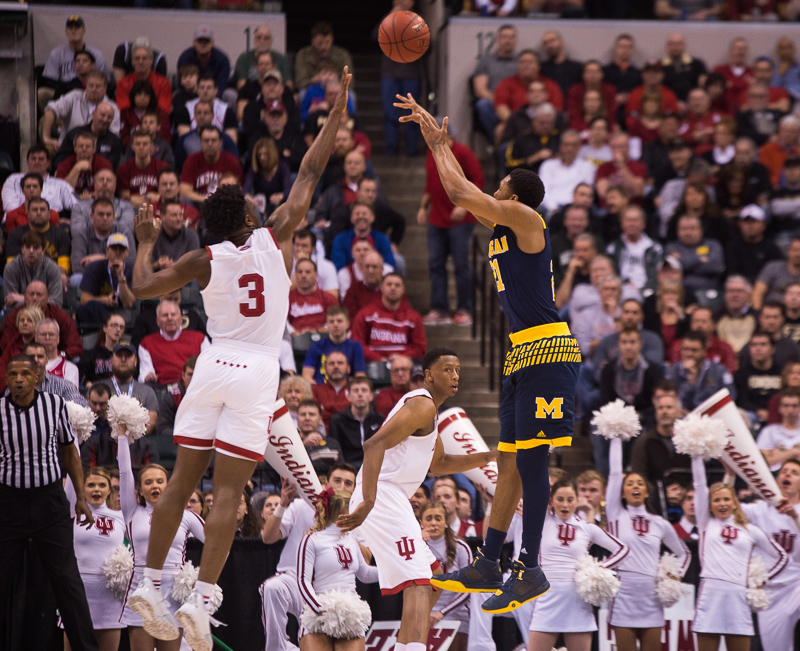 Michigan is in the NCAA Tournament, but will have to play its way into the real party. The Wolverines are matched up with Tulsa in a First Four battle in Dayton on Wednesday night for a chance to play Notre Dame on Friday night.

Michigan is in the NCAA Tournament, but will have to play its way into the real party. The Wolverines are matched up with Tulsa in a First Four battle in Dayton on Wednesday night for a chance to play Notre Dame on Friday night.

At least one national personality likes the Wolverines as an upset candidate. Jay Bilas filled out his bracket live on ESPN and named Michigan as his upset pick to knock off Tulsa and Notre Dame.

No one should be happier than Tulsa coach Frank Haith. He escaped an investigation a prior coaching stop, Miami, because of a technicality and then bolted from his former post at Missouri for Tulsa amid speculation he was going to be fired. There were 59 people who submitted mock brackets onBracket Matrix — and not a single one predicted Tulsa to get into the field. The Golden Hurricane, who finished 20-11 and 12-6 in the American, will play Michigan in the First Four on Wednesday.

The Wolverines were just 11-9 without star Caris LeVert in the lineup. LeVert is done for the season and won’t return in the NCAA tournament. John Beilein’s team got an 11-seed and will face Tulsa in Dayton.

Michigan: If the selection committee had excluded Michigan from the field, few outside the program’s fan base would have complained. The Wolverines went 4-12 against the RPI’s top 100 and suffered a 17-point loss to Purdue in the Big Ten tournament. Now, the Wolverines must win a First Four matchup against Tulsa to earn the right to face Notre Dame in the first round. But let’s say the Michigan team that beat Maryland, Purdue, Indiana and Texas shows up. No reason to believe that right now. But if a Michigan team that shoots 38.4 percent from the 3-point line gets hot, it’s not crazy to think that John Beilein’s squad could be the author of multiple upsets.

Five Thirty Eight published an interactive bracket with their calculated odds by round, giving Michigan a 19% chance of reaching the second round.

Here’s a similar analysis from KenPom which gives Michigan a slightly better chance of advancing and a 1 in 3306 chance of winning the whole thing.

Michigan was two spots away from avoiding Dayton, according to the NCAA’s official seed list. The Wolverines are seeded No. 42 and would have had to pass Vanderbilt (41) and VCU (40) to escape the First Four. Tulsa (45) was the last at-large included in the field.

Yup, you’re reading that correctly: If the Wolverines advance past Tulsa, our model actually favors them to beat Notre Dame. The Irish can’t guard anyone (172nd in adjusted defensive efficiency), while Michigan can light it up from 3-point range (44.5 percent of their field goal attempts).

Sports on Earth also tabs the Michigan-Tulsa winner as the 8th most-likely upset:

Michigan sneaked into the field without injured star Caris LeVert thanks to a buzzer-beater to knock outIndiana in the Big Ten tournament. Tulsa may be the most controversial team in the field, with a 20-11 record and an early AAC tournament exit at the hands of Memphis. Michigan has wins over Maryland, Indiana, Texas and Purdue. Tulsa has wins over UConn, Wichita State, Temple, SMU and Iona. Both of these teams are in the 50s in the KenPom ratings, and whoever wins in Dayton will draw a Notre Dame squad that is among the nation’s best on offense but is highly beatable on the defensive end, making it look like a boom-or-bust NCAA tournament team.

CBS re-ranked the teams in the field and slotted Michigan at No. 37 and Tulsa at No. 50. They also gathered every coach in the NCAA Tournament’s favorite band or musician, John Beilein went with Marvin Gaye.

The coach who had to be the most shocked to be in this field, Frank Haith at Tulsa, is all about that Cooleyhighharmony life, too. Haith is a big Boyz II Men guy.

Haith will go up against John Beilein in the First Four on Wednesday. How about this from Beilein: He’s a huge Marvin Gaye fan. You’ll never look at him the same way again.

These guys are about more than just hoops. In truth, 75 to 80 percent of them loved getting a chance to just talk tunes. Beilein was happily scrolling through his phone trying decide who he wanted to pick after being talked off going with a country artist.

Mike DeCourcy rags on Tulsa and picks West Virginia as the most likely upset of the East region. That sequence of events would require Michigan to pull off one upset and two wins over double-digit seeds to make the Sweet 16 — but is still a long ways off.

Seeded too high: No. 11 Tulsa. Because they’re here.

Only five teams have a shorter commute to their opening round game, but I’m sure Michigan would rather be in an open practice somewhere further away on Wednesday than playing in the First Four. Tulsa will travel 752 miles to Dayton.