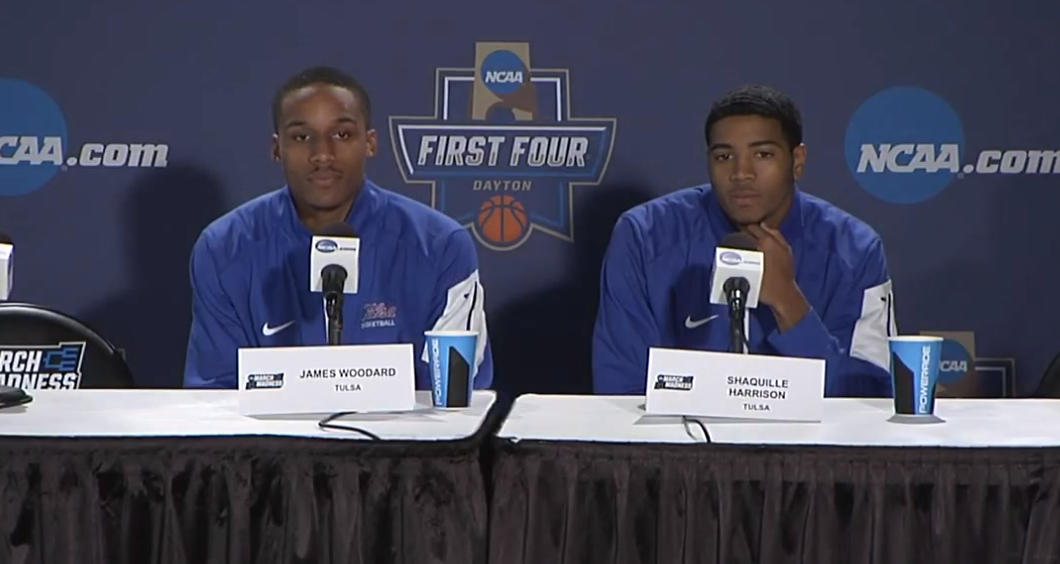 Tulsa wasn’t supposed to be in the NCAA Tournament, but there they were in Dayton on Tuesday, previewing their matchup against Michigan.

His Golden Hurricane team wasn’t supposed to be in the NCAA Tournament, but there they were in Dayton on Tuesday, previewing their matchup against Michigan.

“Obviously we’re really excited about being here in Dayton,” Haith said. “We were just ecstatic to have an opportunity to continue to play in the NCAA Tournament.”

Objectively speaking, Tulsa probably should be ecstatic. At 20-11, with few key wins and coming off of a 22-point loss in the first round of the American Athletic Conference Tournament, few expected the Golden Hurricane’s name to be called on Selection Sunday. Zero out of 59 bracketologists followed by BracketMatrix.com predicted them to make the field.

In fact, the team itself didn’t expect to make it into the tournament. Haith was driving in the car when he heard the news, and his players didn’t even bother to gather as a team, a tradition among tournament hopefuls.

Senior guard Shaquille Harrison certainly didn’t expect to make the field and let his thoughts be heard on Twitter before the show.

“We didn’t watch it together,” Harrison said on Tuesday. “We were watching it separately. Everybody watching it, we knew we had a chance but we just wasn’t for sure. So when we saw our names, it was the greatest day.”

Though the tournament was the unlikely destination for Tulsa, its journey continues Wednesday. The Golden Hurricane take on a Wolverine team that also was on the bubble, but was a far more likely candidate with several top-25 wins and plenty of Big Ten clout. Tulsa is only a 3-point underdog, but has been counted out by most of the national media as lucky to be here.

“There’s going to be a team every year that everybody says, they shouldn’t have gotten in,” Haith said. “And we’re that team this year. So that’s okay. That’s behind us. We’re here now. Let’s go play the game.”

Haith wasn’t naive when discussing Michigan either, noting that John Beilein often does his best work in March. The Michigan coach is 10-5 in the NCAA Tournament with Michigan and 16-9 overall, capitalizing on short preparation time with a complicated and high-performing offense.

“They’ve got five guys that can shoot the ball, which make them extremely difficult to defend,” Haith said. “They have great screening actions, and our defense has to be on point to defend them. I think that they’re as good as an offensive team as there is in the country.”

Though Tulsa will have a tough time controlling the Wolverines on offense, it does have something Michigan seems to never have — an abundance of contributing seniors.

The Golden Hurricane start four seniors, and have three more in the regular rotation, making them one of, if not the most experienced team in the country. By comparison, the Wolverines have had three seniors that lasted an entire season in the rotation in the last five seasons combined.

Experience might not be enough to take Michigan down, but, whether it deserves to or not, Tulsa has the opportunity it sought after. The Golden Hurricane will get to play in the NCAA Tournament with its season — and in some cases, careers — on the line.

“It’s a very special moment for us,” said senior guard James Woodard. “This could be our last game, in the stretch of our season and careers. And it’s just a great opportunity for us. And we’ve got to use our veteran-led team as an advantage in this tournament, because we have been around a long time.

“We’ve seen every situation, and we’re just glad to be here.”