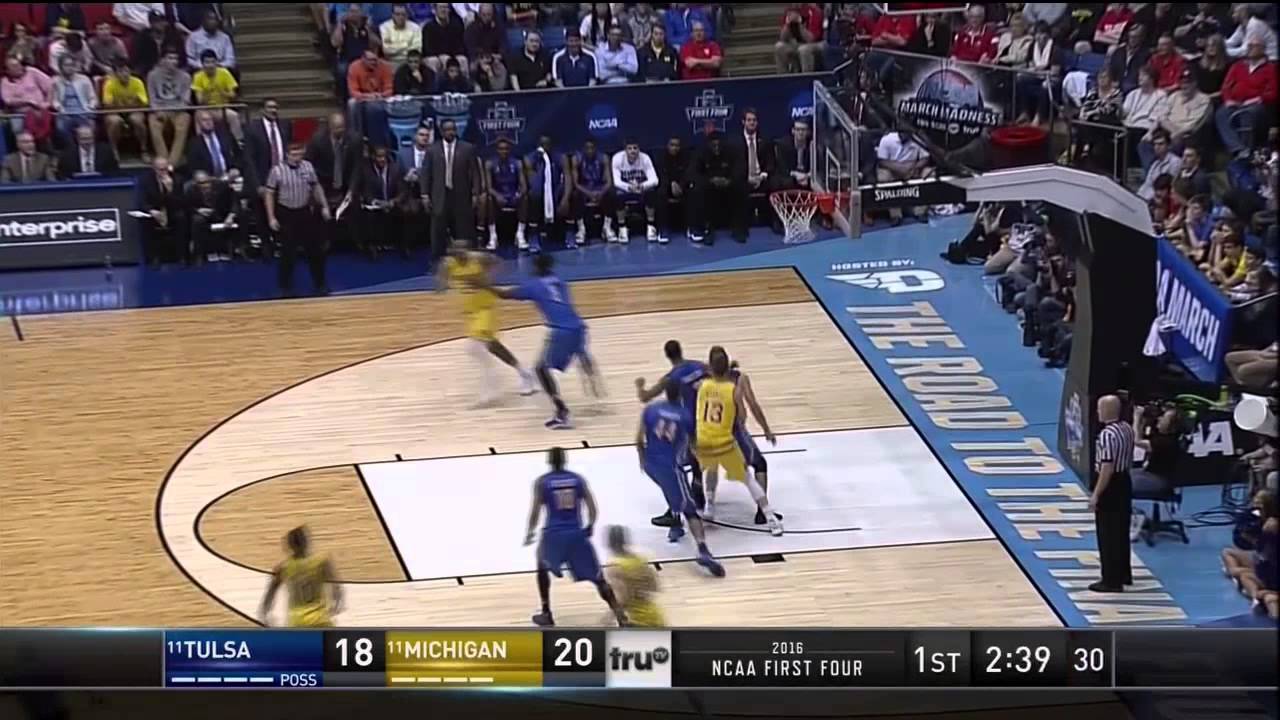 As the Wolverines advance to Brooklyn to face No. 6 seed Notre Dame, we look at the five key plays from Wednesday night.

DAYTON, Ohio — The Michigan basketball team has certainly developed a flair for the dramatic.

After playing few close games all season, the Wolverines won Wednesday in the final minute for the third time in seven days. This time, the hero was junior forward Zak Irvin, and the opponent was Tulsa in the NCAA Tournament’s First Four matchup. Though far from Michigan’s prettiest performance of the season, it advanced to see another day of postseason action.

As the Wolverines advance to Brooklyn to face No. 6 seed Notre Dame, we look at the five key plays from Wednesday night.

1) Walton closes half on hot streak

More than midway through the first half, Michigan looked incompetent on offense. The 3-point shots weren’t falling, and no one was able to create space or get the the rim. Even with a good defensive effort, the Wolverines fell behind, 16-9, and looked dangerously close to letting a lack of productivity on offense end their season.

But led by junior guard Derrick Walton Jr. — who scored Michigan’s final 10 points of the half — the Wolverines closed the stanza on a 19-4 run to take an eight-point lead into the break.

Walton would run into foul trouble and see limited action in the second half, but was more than helpful in keeping Michigan on track in the first.

“It’s March, man,” Walton said. “You win or go home at this point. It kind of boils down to a game of wills. … Dig your deepest to make the extra play, the extra stop.”

“You’ve got to get everything you can get out of everyone on your roster and in your rotation. … It was a lot of guys contributing in some ways. It’s really healthy.”

As mentioned above, foul trouble to Walton (and junior forward Mark Donnal) gave the Golden Hurricane an opportunity to come back. Good ball movement combined with an aggressive approach on both ends put Tulsa back in the game against the shorthanded Wolverines.

“We knew now at this point in the season the season’s on the line, and they were going to come out in the second half, drive to the basket and they were able to do that,” said junior forward Zak Irvin. “We’ve got to give them credit, they’re a great team. I’m just proud of how hard we fought and able to finish strong.”

Michigan had teased the idea of running away with the win in Dayton, but a valiant and energetic effort from the Golden Hurricane put a damper on those hopes. Michigan’s lead was gone in two and a half minutes and the game would go back-and-forth from that point.

3) Others step up with Walton sidelined

Michigan shot just 24 percent (6 of 25) from 3-point range, and struggled tremendously to get to the free-throw line. But led by sophomore guard Muhammad-Ali Abdur-Rahkman, the Wolverines were able to keep pace with Tulsa without its starting point guard or center.

“We knew that shots weren’t falling,” Abdur-Rahkman said. “We knew we had to get to the basket and play in-the-paint ball. We needed to find open shooters or score at the rim, so that was a point of emphasis.”

When Derrick Walton went to the bench with four fouls, there was still a lot of time left on the clock, but his teammates answered the call immediately. Abdur-Rahkman drove and kicked to Duncan Robinson for a three, Zak Irvin buried an elbow jumper and Abdur-Rahkman got in the scoring column with a filthy spin move.

“I wouldn’t call it a pretty win,” said redshirt-sophomore forward Duncan Robinson. “But I’d call it a gritty win.”

Of course, Abdur Rahkman’s play also helped. At times the only player on the floor willing or able to create offensive opportunities, the sophomore led the Wolverines with 16 points.

Two of the most exciting, and most important of those points came with just under four minutes to go. With the shot clock expiring and Tulsa surging once again, Abdur-Rahkman shot up a high floater from a near-impossible angle.

But the ball kissed off the glass.

“That was not dialed-up in any way,” said Beilein, who later gave the shot a 9 out of 10 on the degree of difficulty scale. “That was: Please get that ball in the basket.”

Michigan threw a couple possessions away late and found itself facing another deficit in the final minute. John Beilein dialed up his sometimes inconsistent junior guard for a shot attempt at the top of the key.

“I look in his eyes and can tell a lot from his eyes,” Beilein said. “I could tell he wanted the ball late and we just went with it.”

Irvin didn’t need anyone to tell him to shoot, he was ready and it didn’t matter that a few of his misses weren’t even close just minutes before.

“My teammates know I’m going to shoot the basketball,” Irvin said. “No matter how many I miss, I feel like the next one is going to go in.”

To Irvin’s credit, not only his coach, but his teammates had confidence in him to take the shot and he got the job done, sending Michigan to the next round.

“He’s got that mentality where it doesn’t matter how many he’s missed,” Walton said. “When the moment is big and the shot really matters, guys can count on him to take and make the shot.”