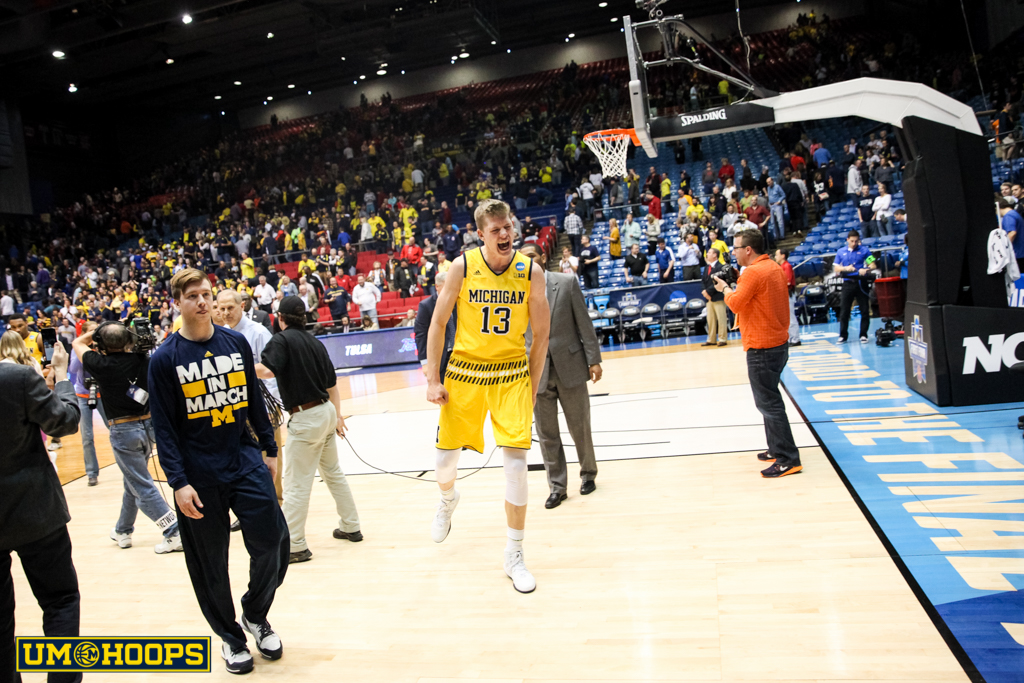 With Michigan’s season on the line and the national spotlight shining bright, Wagner shined brighter. The same forward that played just one minute in the Wolverines’ final five regular-season games ensured they will play at least one more.

DAYTON, Ohio — Moritz Wagner’s name was called just three minutes and 43 seconds into the game. It was unusually early for the gently-used forward, but after Mark Donnal ran into foul trouble and Ricky Doyle ran into trouble overall, the freshman was needed for spot minutes.

Through just one of those spot minutes, Wagner had a dunk, two rebounds and a block, and he was just getting started.

Through five minutes, the spot minutes were no longer spot minutes. Wagner had asserted himself as the best big man on the court.

With Michigan’s season on the line and the national spotlight shining bright, Wagner shined brighter. The same forward that played just one minute in the Wolverines’ final five regular-season games ensured they will play at least one more.

The freshman forward finished with four points, eight rebounds and four blocks in the biggest game of his career, helping lead Michigan to a 67-62 win over Tulsa to kick off its NCAA Tournament run.

At a time other players falter and teams end their seasons, Wagner is thriving like never before.

“Moe is just finally showing what he’s got,” Doyle said. “He’s always had these moves, this great skill set. He had some great rebounds, some great dunks today blocked a lot of shots and used his length really well … but the thing that helps us the most is his energy.”

Of course, Wagner’s breakout performance doesn’t occur if Donnal and Doyle don’t struggle. Though the Wolverines had a clear size advantage at all positions, the Golden Hurricane was the more athletic team on the wings. Michigan’s more experienced big men weren’t ready to match, so Beilein had to take a risk on a player he moved to the scout team in February.

Fortunately for the Wolverines, that move allowed Wagner to reset with less pressure to compete for minutes and more practice time to grow. Issues that plagued him early in the season such as fouls, turnovers, defending Big Ten big men were smoothed out. By being the star on scout team, Wagner learned how to make his presence felt on the court.

And more importantly, he developed the confidence that he could do the same in the real games, and the trust in Beilein to put him in the game again once March rolled around.

“He got back to who we saw down in the Bahamas,” Beilein said. “I think he got his confidence back. You’ve got to remember he’s 18 years old. He’s still 18. He left Germany in July. And he hasn’t been home. And this is a hard thing for him to go through.

“But he really has some confidence right now. And you can see what we saw in him these last couple of games.”

While most teams shorten their bench when postseason play comes around, the Wolverines have done the opposite. In the Big Ten Tournament, it was to prepare for an indefinite amount of games to play on consecutive days.

Now, however, Wagner has simply established himself as too good to bench. Throughout Wednesday’s game, the freshman found himself in the middle of plays, delivering key blocks, pulling in much-needed rebounds and slamming home two dunks that brought the crowd to its feet.

He was still Michigan’s third big man off the bench in the second half, but John Beilein’s trust to play him in the closing few minutes shows just how much confidence Wagner has gained from the staff in a matter of days.

“He just got a little more opportunity, and with that it really shows the ability that he has,” said Donnal, who cited struggles from his freshman and sophomore seasons as comparisons to Wagner’s inconsistencies. “He showed it at the beginning of the year, unfortunately he went through a little stretch where he wasn’t playing his best, but he just grew and learned from it.

“Right now, he can produce for us at anytime.”

Michigan’s road gets tougher in Brooklyn against Notre Dame. The crowd, arena, stakes and opponents will be bigger. But when Wagner was taken out of Wednesday’s game, he looked ready for the challenge. The only active freshman Wolverine took time to face the Michigan fans behind the bench, raising his arms to draw even more noise from the electric crowd.

Moe Wagner is made for March, and thriving like never before.

“Moe has been huge for us,” said junior forward Zak Irvin. “He’s definitely a spark plug off the bench. It all started in the Big Ten tournament. He was a big asset tonight. He’s gotta keep that going into Notre Dame.”

Added Doyle: “What you see is what you get. That’s Moe.”