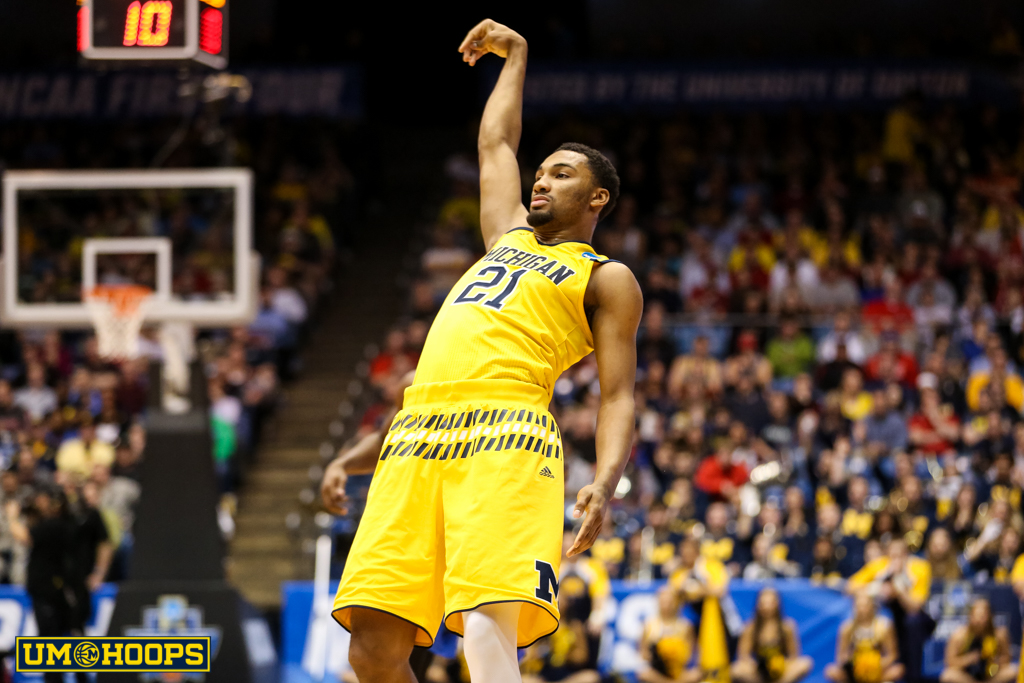 John Beilein, Zak Irvin and Muhammad-Ali Abdur-Rahkman were on the podium after the Wolverines survived the First Four to advance to face Notre Dame in Brooklyn on Friday night.

John Beilein, Zak Irvin and Muhammad-Ali Abdur-Rahkman were on the podium after the Wolverines survived the First Four to advance to face Notre Dame in Brooklyn on Friday night.

JOHN BEILEIN: First of all, we watched in two days a ton of Tulsa film. We have so much respect for that team. Those seniors on that team, they deserve to be in the NCAA Tournament. They proved it today. They’re really a difficult matchup for us. They drove me crazy with trying to figure out how to guard their quickness, how to guard those three left-handed guards at one time, and they were terrific today.

And so were our guys. We couldn’t make a shot. We just played Thursday, Friday, Saturday, traveled back Sunday, and then all of a sudden we’re playing again. I think we felt it a little bit but we didn’t feel it in the last couple of minutes when we made all the right plays.

THE MODERATOR: Questions for the student-athletes.

Q. Zak, John just mentioned this, the shots weren’t really going down for you guys. It’s nothing new that you guys are going to put up a lot of 3s but where does that confidence come from that maybe the next one is going to go down, especially at a critical point there at the last minute?
ZAK IRVIN: We did have a lot of confidence going late in the stretch of the game. I just think it just goes to how strong we’re connected. We’re a close-knit group and we tell each other no matter how many we miss, the next one is going to fall.

Q. Mo, what did you see there in the second half that you could get to the rim at any point that you wanted to?
MUHAMMAD-ALI ABDUR-RAHKMAN: We knew that shots weren’t falling. We knew we had to get to the basket and play in-the-paint ball. We needed to find open shooters or score at the rim, so that was a point of emphasis.

Q. Zak, when that ball goes in the hoop in such a big moment, what’s the feeling like out there on that 3-pointer?
ZAK IRVIN: It’s an amazing feeling. Especially with the crowd that was able to be here. We had a lot of support. Felt kind of like a home game. Gotta give thanks to all our fans that followed with us.

Q. Did it seem like they were a little more aggressive in the second half trying to take it to the rim and were you a little surprised they didn’t do more of that in the first half?
ZAK IRVIN: I mean, yeah, we knew now at this point in the season the season’s on the line, and they were going to come out in the second half, drive to the basket and they were able to do that. We’ve got to give them credit, they’re a great team. I’m just proud of how hard we fought and able to finish strong.

MUHAMMAD-ALI ABDUR-RAHKMAN: Like he said, the season’s on the line, so you want to get to the basket and score easy points and not fall in love with the jump shots.

Q. As your coach said a while ago, you guys played a lot of games in a few days. Did you feel it and did you get a second wind out there? What was it like I guess out there in the second half with so much on the line?
MUHAMMAD-ALI ABDUR-RAHKMAN: I think you’re feeling it a little bit but when the crowd is behind you like that it gives you the energy that you need to push through and get a win.

ZAK IRVIN: Yeah, I think at this point every team in the country that’s in the tournament is trying to fight fatigue. I’m just proud of how hard we were able to do it tonight and just gotta move forward.

Q. Zak, you guys have won a couple games in the Big Ten tournament in the last minute with some big shots and again tonight. Is there some carry-over when you get used to winning games at the end like that?
ZAK IRVIN: We always have scenarios in practice. We always, like the last four minutes, we always try to work on because we know how important it is in the game. I’m just proud of all our guys, how we’re able to do it especially starting in the Big Ten tournament and going to now, and we just gotta keep that going forward.

Q. Can you talk about the energy that Mo Wagner has been giving you and especially today?
ZAK IRVIN: Mo has been huge for us. He’s definitely a spark plug off the bench. It all started in the Big Ten tournament. He was a big asset tonight. He’s gotta keep that going into Notre Dame.

MUHAMMAD-ALI ABDUR-RAHKMAN: Yeah, Mo’s an energy guy. Even when he’s not on the court he’s trying to lift us up when we’re down and things like that. So it’s great to see him out there, being energized and play well.

THE MODERATOR: Thank you. Questions for Coach.

Q. You mentioned earlier in the year it’s been feast or famine when it comes down to big wins or close games. But you found a way to pull them out. What’s been the common denominator there in those wins?
JOHN BEILEIN: I think the fact that we were able to win those games in the Big Ten tournament. He was right back there. We hadn’t had many of those games, even inbounding the ball was a struggle against Northwestern. We hadn’t had to do it. We were either up by 10 or down by 10. So that was really a thing that we needed to have. You don’t want to have them as a coach. But I love the way our kids have a rhythm at that time with the seven or eight actions we’re going to call at that time and just come off there with confidence.

The last play we ran for Zak was very similar to the one we ran against Northwestern, a little tweak in it. And it got him open where I want to get him open. I trust him at that time. But those are big things now he’s made those shots. He felt good about it again.

Q. You just said you trust him in those moments. Is there ever a point in any game you guys are 6 — for-24, think, 5-for-24 at that point, where you lose anything, any faith that the next shot’s going down?
JOHN BEILEIN: For him or for anyone? No, I think the odds keep changing better in our favor when they’re missing them. But we don’t want to take bad shots. I don’t want to get this idea we’re this 3-point-happy team. They all happen to be good 3-point shooters, but we only made a few today, we won the game. We got a lot of baskets going to the hoop or drop-offs. Credit them defensively. You’re right, they’ve got great quickness. They switched every ball screen the whole game long, almost the whole game long. So that gave us issues at trying to get the ball inside to our big man. But overall we’re going to do what we do, and if you give us the 3-point shot, we’re going to take it. If you don’t, we’re going to drive it or fight it inside.

Q. This is somewhat of a unique situation with the First Four game, used to be the NCAA Tournament, these three mini tournaments where you have two games. Now you have three at two different sites. Take us through the whole process you’re going to have to adjust to. How are you going to handle it?
JOHN BEILEIN: What I understand we’re getting on a plane tonight and going to Brooklyn tonight. It’s going to be like three or four in the morning we’re going to get in there. So we’re going to probably have this first time I’ll probably ever say to the guys: All right, sleep until noon. We’ll worry about Notre Dame after that. We won’t have any morning meetings or anything. It’s all new to me. I’m glad I’ve experienced it. And been in the tournament a lot, but this is a new one. I think our kids love this win just like as they do any NCAA win. So it’s a good feeling. But we’ve got a lot of adjustments. Now, I don’t know anything about Notre Dame. I haven’t watched one of their games. I’ll be doing that on the plane tonight. And we’ll just figure out a way to get some rest tomorrow and also it’s almost like you win on the first round, you’ve got a second-round game, gotta turn around quickly.

Q. With Mo, because he hasn’t played as many minutes as Zak, maybe you can ride him a little bit, you think, in this tournament?
JOHN BEILEIN: He just seemed in practice — you know what we did, we put him on the scout team for a while because he was never on the scout team, and he really played well. And he got back to who we saw down in the Bahamas. Because he hadn’t done that. He hadn’t done that in practice or in games. And so we saw that, and I think he got his confidence back. You’ve got to remember he’s 18 years old. He’s still 18. He left Germany in July. And he hasn’t been home. And this is a hard thing for him to go through, and he has just been such a pleasure to coach. But he really has some confidence right now. And you can see what we saw in him these last couple of games.