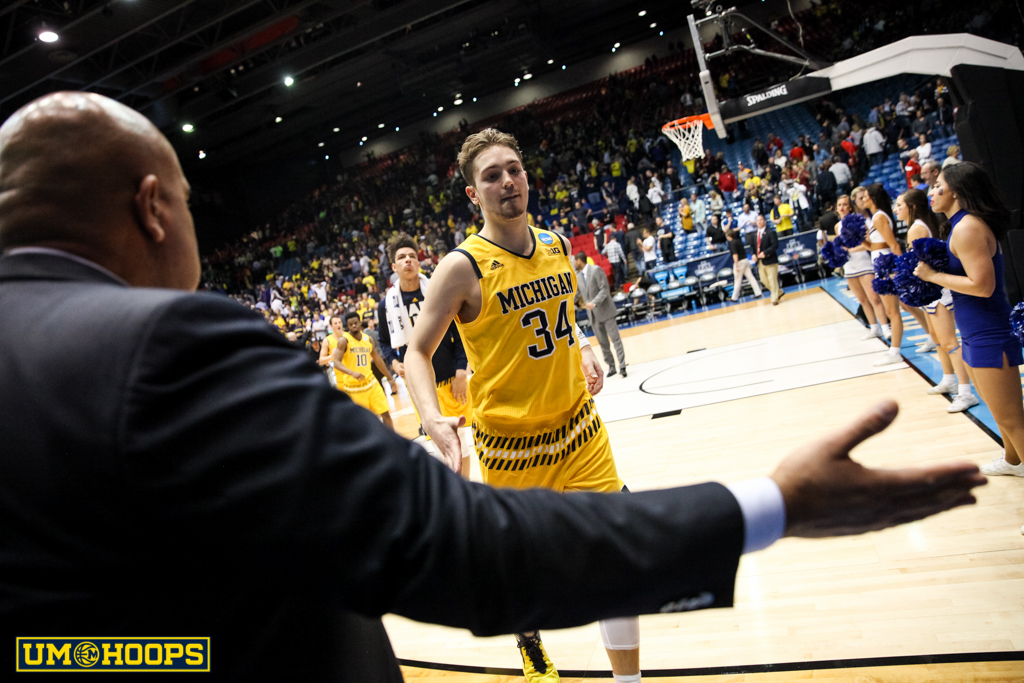 BROOKLYN — At 11 p.m. Friday night, the Michigan basketball team was on top of the world. The Wolverines had won three do-or-die postseason games in the eight days prior, were up 12 over favored Notre Dame and appeared to be in the early stages of a charmed tournament run.

But mere minutes after midnight, the Fighting Irish delivered a strong dose of reality to the maize and blue, came back to win, 70-63, and ended Michigan’s season in heartbreaking fashion.

Just as the Wolverines’ first half was an exhibition in 3-point shooting, aggressive defense and all they could accomplish as a team, Michigan’s second half was a clip show of season-long woes:

The backcourt duo of Derrick Walton and Muhammad-Ali Abdur-Rahkman, who combined for 22 points on 13 shots in the first half, showed their season-long bouts with consistency by mustering just three points on 12 shots in the second.

Much like several of the Wolverines’ Big Ten opponents, Notre Dame got whatever it wanted offensively in the second half, shooting 57.1 percent from 2 and 60 percent from 3 in a 41-point, 29-possession second half clinic.

And when the wheels began to fall off for the Wolverines, there were no heroes or leaders to stop the bleeding.

In spite of its lackluster second half, Michigan was still right there in the second. Zak Irvin had a shot to tie the game with :13 seconds left, but this time it rimmed out. Irvin’s battled consistency all season, but he’s hit Michigan’s most important shots down the stretch this season — this time he just didn’t have enough.

“Some of those shots we let slip through our fingers.”

Perhaps a tougher pill for the Wolverines to swallow actually may stem from such a successful first half. For almost all of the opening 20 minutes, a team that lost its two most-experienced and important pieces and trudged through 35 games with less depth than most of its opponents looked as good as ever. Shots were falling, the Wolverines looked stingy on defense, and even though it was against a larger and more veteran opponent, Michigan looked aggressive and tough in one of its best halves of the season.

If the first half was about as good as the Wolverines have played all season, the first eight minutes of the second half were the opposite. The Fighting Irish went on a 19-7 tear, tying the game up at 48. From there, Michigan was deflated, and though there were five lead changes between the two teams, the Wolverines always seemed to be on the defensive after letting their lead slip away.

“They came out and denied some passes and put us back on our heels for a few minutes,” Beilein said. “It got them right back in the game, and then it was a dogfight — who was going to make the last couple of shots was going to win the game. We shouldn’t have put ourselves in that situation from how we played in those first few minutes of the second half.”

But they did, and instead of furthering a charmed and, in some ways magical run that looked like a given by 11, the Wolverines were done by midnight packed up and leaving the Barclays Center by 1.

Gone in a New York Minute.