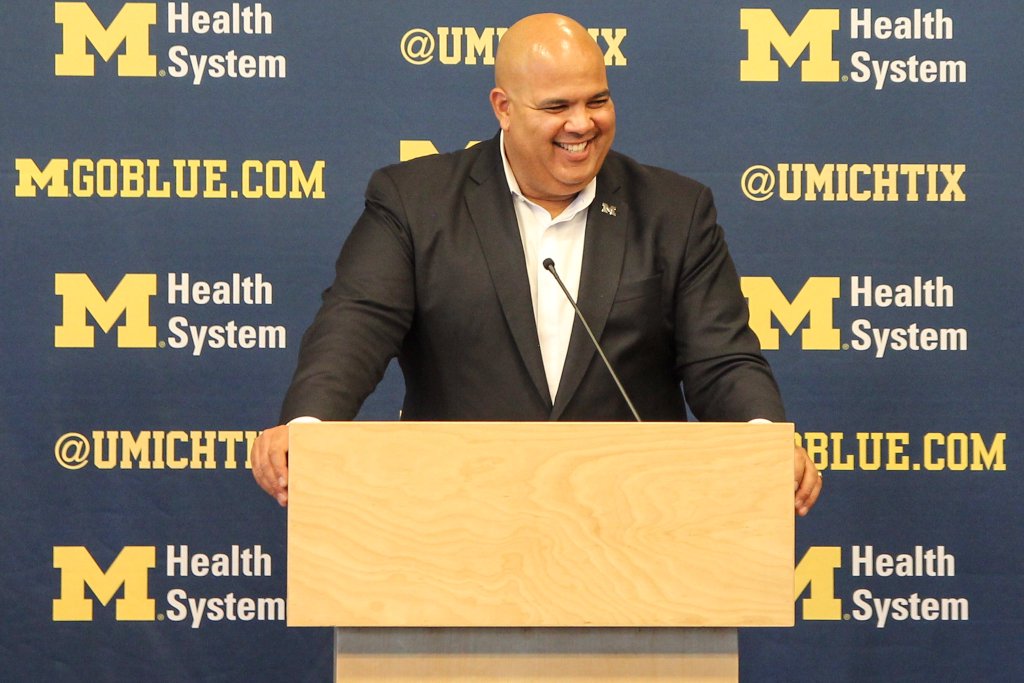 Friday morning, Michigan coach John Beilein released a statement removing all transfer restrictions on senior guard Spike Albrecht and sophomore forward Ricky Doyle, changing his mind and allowing both to transfer within the conference if they so choose.

Later in the day, his boss applauded the move.

Friday morning, Michigan coach John Beilein released a statement removing all transfer restrictions on senior guard Spike Albrecht and sophomore forward Ricky Doyle, changing his mind and allowing both to transfer within the conference if they so choose.

Later in the day, his boss applauded the move.

Speaking formally to the media for the first time since taking over as Michigan’s Athletic Director, Warde Manuel addressed the issue of graduate and intra-conference transfer, both controversies that Beilein found himself in the middle of this week.

“I give credit to John for coming to the decision,” Manuel said of the change of heart. “After he thought about it, to go make the switch to allow them to transfer and have a release with no stipulations. It was a great conversation.”

While Doyle, who would lose a year of eligibility if he transferred to another Big Ten school, is less likely to move to a team Michigan plays, Albrecht could draw interest from many conference foes, including his home state schools Indiana and Purdue.

Albrecht, who spent four years playing for the Wolverines before injuries pushed him into retirement in December, is likely to get a medical redshirt, making him eligible to play immediately for his fifth year. And though Beilein has praised and applauded Albrecht’s game on may occasions, Michigan’s lack of available scholarships made it impossible for him to stay unless he walked on to the team.

The Wolverines recruited over Albrecht, who was expected to have exhausted his eligibility by this point, out of necessity. Incoming freshman point guard Xavier Simpson is the jewel of Michigan’s recruiting class, most-recently was named Mr. Basketball in the state of Ohio, and was expected to fill Albrecht’s role as backup point guard in 2016-17.

Initially, Beilein expressed hesitancy about letting his team’s two-year captain join an opponent’s squad. But after drawing national attention, discussing the issue with Manuel and reconsidering the situation, announced Friday he would remove all restrictions on Albrecht’s release.

“In the case of Spike where the anticipation was that he would have completed (his career) his senior year and we recruited young men to come in … I think that’s a case where we do need to provide a release without any stipulations,” Manuel said. “In general, I am very supportive of grad student transfers not having restrictions.

“I would hope our young people would want to stay here for a fifth year and not leave, but in Spike’s case we had already planned on him finishing his senior year and the recruiting process went forward in the way that it does. … I wish him well and I appreciate all that he brought to the University of Michigan.”

Of course, Albrecht and Doyle’s transfers will be the sixth and seventh transfers in the last five seasons for Beilein and the Wolverines. Last season, Max Bielfeldt transferred to Indiana for his fifth season, and went on to win the Big Ten’s Sixth Man of the Year award. Through it all, Beilein has expressed frustration in the process.

“I think we’re in a dangerous area there where you have the graduate transfer, and then where he can go afterwards and things like that, like we actually have one in our league,” Beilein said two weeks ago in Brooklyn. “Those are difficult things, I think, that we have to look at in the future, and what is the real purpose that have? Is that young man going there just to play basketball? Is he going there to get his Masters degree? How many are getting their Masters degrees? There’s got to be some legitimacy to that rather than just another year of eligibility?”

In addition to applauding Beilein’s change of heart, Manuel noted that transfers are an issue that currently plague college basketball. Stating that roughly 40 percent of Division I players may transfer at some point and that academics tend to suffer in such cases.

“We can all talk about the different examples or the issues that may rise, but in general I think one of our first priorities and my first priority is to help these young people graduate from the University of Michigan with a degree,” Manuel said. “I think once you do that and you still have an opportunity to participate in athletics in your sport, then you should have the opportunity to move to another institution if you choose to do so.

With a coach who made national headlines for attempting to add restrictions to transfer releases working in his favor, Manuel made sure to point out that Beilein is far from the only coach to be opposed to graduate transfer and certainly will not be the last.

“It’s not a John Beilein issue, it’s an issue in intercollegiate athletics,” Manuel said. “John should not in my opinion be the poster child of coaches who feel that transfer issues are an important issue, that the investment of time and wanting to keep people on your team is important. It’s not just him.”