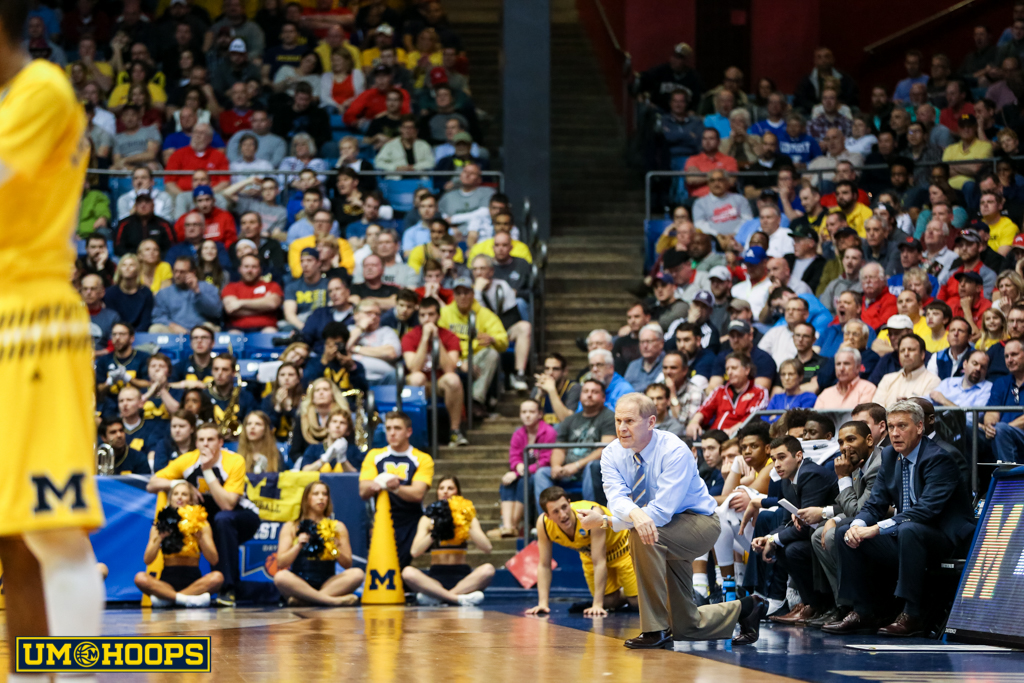 Michigan is in need of at least one new assistant coach after the departure of LaVall Jordan to Milwaukee and possibly two, depending on whether Bacari Alexander is tabbed as Detroit’s next head coach.

Here are a few candidates with backgrounds that could make them a natural fit for the position.

Michigan is in need of at least one new assistant coach after the departure of LaVall Jordan to Milwaukee and possibly two, depending on whether Bacari Alexander is tabbed as Detroit’s next head coach.

The first of two April evaluation periods starts this weekend — with Nike and Under Armour hosting events in New York and adidas in Dallas — which would imply that the Wolverines need to hurry, but that’s not necessarily the case. John Beilein can send Director of Player Personnel Chris Hunter on the road as Michigan’s third recruiter for the time being.

It would make sense to target a candidate with experience coaching guards to replace Jordan, but also with recruiting connections to the state of Michigan or a strong defensive background. Here are a few candidates with backgrounds that could make them a natural fit for the position.

Mann has strong ties to the Midwest and has established something of a pipeline from Michigan to Iowa State. He wasn’t retained by Iowa State after Fred Hoiberg left Ames last June and that unfortunate timing didn’t give him much time to find a new coaching position when most staffs were already full.

Mann was hired by Iowa State in 2011 and forged the Cyclones’ connection to Michigan. He was the point man on the Monte Morris, Sherron Dorsey-Walker, Cassius Winston, Miles Bridges and Percy Gibson recruitments and the main reason that so many prospects in the state of Michigan would have Iowa State on their recruiting list.

His past experience includes connections to the Michigan Mustangs and assistant coaching positions at Central Michigan, Western Michigan and Dayton. He was also considered Iowa State’s lead defensive assistant coach under Hoiberg.

Nichols is a former Beilein player at West Virginia who also played his senior season under Bob Huggins. He’s quickly risen up the ladder and Michigan actually faced off against Nichols in the 2014 NCAA Tournament when he was at Wofford. John Beilein spoke glowingly about Nichols at the time.

“Darris Nichols, one of the assistant coaches (at Wofford), is one of the smartest, brightest point guards I have ever had,” Beilein said in 2014.

Nichols coached two seasons at Northern Kentucky, one at Wofford, one at Louisiana Tech and has been an assistant coach at Florida for the last year under Mike White. He also played for Huggins at West Virginia to supplement his connections to Beilein.

“The main thing Huggs told me when I got into coaching was to be yourself,” Nichols said last year. “I’m just myself. I’m similar to the way I played.”

Nichols was the ‘defensive coordinator’ during his time at Northern Kentucky according to his bio so he certainly has chops on that side of the ball.

Patrick has the obvious family connection as he’s played for (West Virginia) and coached for (graduate assistant at Michigan) his father. The move feels inevitable at some point, but Patrick wouldn’t provide as many natural connections to the state of Michigan.

Since starting his coaching career under Beilein as a graduate assistant from 2008-10 at Michigan, Patrick has been an assistant at Dartmouth, director of basketball operations at Bradley, head coach at West Virginia Wesleyan, an assistant for the Utah Jazz and now head coach at Le Moyne.

Washington is a long-time assistant coach at Oakland and was considered a finalist for Michigan’s open coaching positions in 2010 when the Wolverines revamped their staff.

Lee was an instrumental part of Beilein’s first NCAA Tournament team at Michigan and he’s quickly forging a career as a coach. Lee has been an assistant coach at Marist since 2014 after four years on Beilein’s staff at Michigan as Director of Player Personnel and Administrative Specialist.

Lee might not have as much assistant coaching experience, but the former Michigan captain and Saginaw native has strong connections to the program and would be a natural fit.