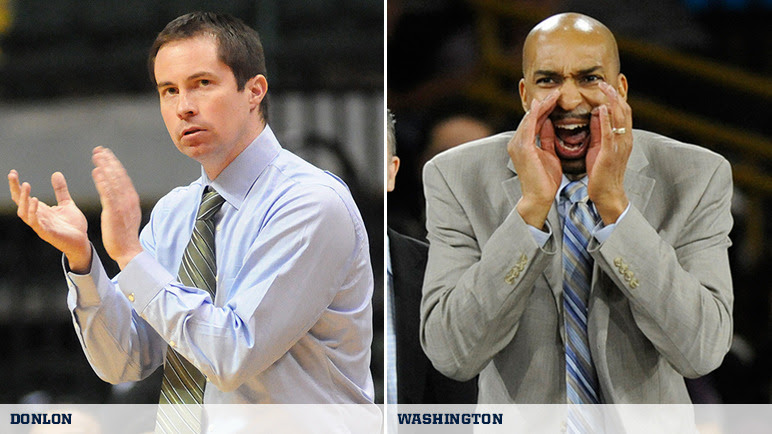 “We are forever grateful for the fine work that LaVall Jordan and Bacari Alexander brought to our program over the past six years,” John Beilein said in a statement. “Their departures, however, have opened up a great opportunity for our staff to grow. Billy Donlon and Saddi Washington are exactly who I felt we needed to be able to continue our success and compete for more Big Ten championships.

“I have known Billy for almost two decades, and I love his passion and IQ for the game,” Beilein said. “He has tremendous experience as a player, assistant and head coach at the Division I level. Improving our defense is a huge goal for us, and defense is one of Billy’s specialties. He is also excellent in skill development, and that has been a key to our success at Michigan. I am excited to have Billy join our staff, the athletics department and this University.

Donlon is regarded for his defensive coaching ability and coached three top-100 defenses at Wright State including two top-50 groups. His teams forced turnovers and cleaned up the defensive glass at a high-level.

“Having the opportunity to work at one of the most prestigious universities in the world as well as with one of the most respected coaches in the game is truly an honor,” Donlon said in a statement. “As a player, I competed against Coach Beilein’s Richmond teams. I always admired the way they played and how they competed the right way. Getting a chance to be part of that is a great opportunity, and I am very eager to get started.”

Washington has been an assistant coach at Oakland for 10 years. He was considered a finalist when Michigan hired Bacari Alexander and has deep connections to the state of Michigan.

“Saddi and I have known each other since his days at Western Michigan when I coached against them,” Beilein said. “We have also talked a lot of basketball in my nine years here at Michigan. Saddi is an outstanding teacher of the game, and I love that he can coach multiple positions. He has established great relationships as a recruiter both in and out of the state of Michigan. His poise and presence remind me of LaVall, and I know he will be a great asset to our program.”

Serving as Oakland’s associate head coach, big man coach and recruiting coordinator, Washington has played a pivotal part in an Oakland program that has been one of the best mid-majors in the Midwest.

“My family and I are truly blessed and excited to begin this new phase of our lives in Ann Arbor,” said Washington. “Growing up in the state of Michigan, I understand the rich history that has been developed and maintained here at U-M. It is the elite standard of excellence both academically and athletically. Coach Beilein is known throughout the country as an elite coach and tactician, so I look forward to learning under his tutelage and further developing my craft as a coach and builder of young men.”

Washington grew up in Lansing and played at Western Michigan. He also coached at Romulus before joining the satff at Oakland. Washington has been one of the primary recruiters for some of Oakland’s great players such as Kay Felder, Johnathon Jones, Travis Bader and Drew Valentine.