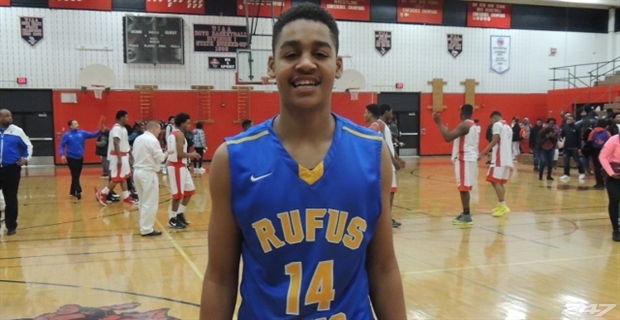 Michigan commitment Jordan Poole had his summer coming out party over the weekend in Hampton, VA. Poole had his best weekend on the circuit this year with several big time shooting performances.

Michigan commitment Jordan Poole had his summer coming out party over the weekend in Hampton, VA. Poole had his best weekend on the circuit this year with several big time shooting performances.

Poole exploded for 33 points against Pro Skills (TX). making 5-of-8 twos and 5-of-14 threes while adding seven rebounds and three assists for good measure. Poole also notched an 18 point game earlier in the weekend against Houston Hoops and dished 7 assists in a win over Seattle Rotary Style.

NY2LA Sports was on hand for one of Poole’s stronger performances:

If teams are going to let Poole shoot in rhythm, they’re going to pay. When the Michigan commit is left open, it’s automatic. He had 18 points in Saturday’s win over Houston Hoops. Poole continues to improve his game and is becoming more well-rounded as a scorer. Primarily a pull-up jump shooter early in his career, Poole showed the ability to run off screens, catch, and shoot on the go. Poole knocked down four triples in the game. One of the best shooters in his class, Poole opens up so much for Mac Irvin Fire as wings can’t leave him running free on the perimeter.

Jordan Poole is on fire. Three-straight jumpers. Doesn't even care that there's a hand in his face. #EYBL

College coaches weren’t on the road this week, and won’t be again until July, but several new targets continue to emerge.

One notable target on the wing is Justin Smith. Smith is a priority target for Wisconsin and Indiana and Michigan has started to come on. He’s still raw around the edges, but is known for his athleticism on the wing.

One of the highest upsides in the 2017 class, Smith has just about everything you want from a wing at the high major level,” NY2LA wrote. “Three-point shooting, explosive athleticism, lock-down defensive ability, Smith hits most of the check marks. The 6-foot-7 junior has picked up offers from Stanford, Florida State, Xavier, Villanova, Iowa State, and North Carolina State this spring.”

247Sports writes that Michigan could be an important newcomer to Smith’s recruitment.

We’re hearing before the spring it was an Indiana-Wisconsin battle for Smith. He’s added some good offers since and we’re told Stanford is also high on his list. Smith would like to play at a prestigious academic school. Because of that Wisconsin will “hang around” according to a source. We’re also hearing Michigan, who hasn’t offered, would be a major player if they pull the trigger.

Gaines had yet another outstanding Nike EYBL performance last night against Seattle Rotary (WA). He went 8-9 from the field and scored 24 points, while also grabbing 10 rebounds. The Albany City Rocks (NY) guard slashed and finished well in this contest. With it being his second year in the Nike EYBL, he comes with plenty of experience and this has shown in the past two sessions.

Gaines listed Michigan as a school that he’s ‘really close with’ in an interview with D1Circuit.

Kyle Young had a monster weekend, continuing to stuff the stat sheet. He averaged 24 points and 11 rebounds per game in Virginia, including a game-winning four-point play on Friday against CIA Bounce.

Off the court, the big news in Young’s recruitment is that the Ohio native added an offer from Ohio State. Young has offers from almost the entire Midwest at this point including Michigan State, Butler, Purdue, Xavier and Wisconsin.

Young discussed some of his new offers with Rivals.com.