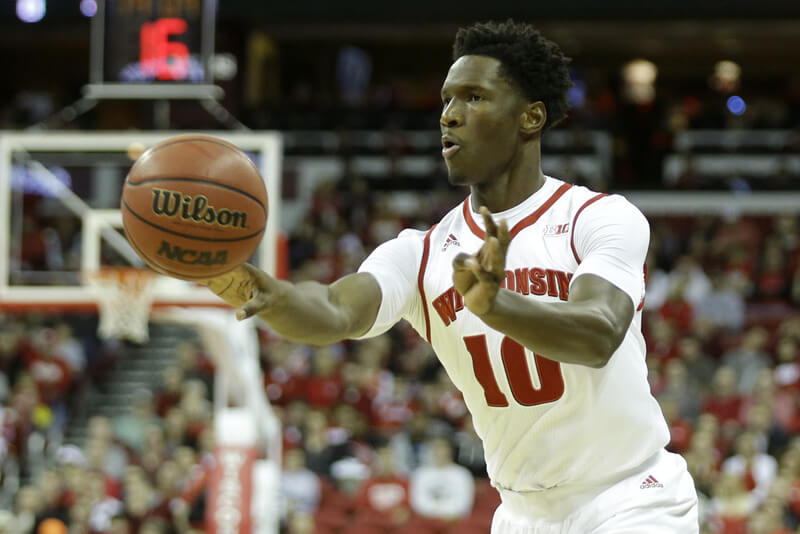 The NBA Draft deadline has passed and we now know who will be returning to the Big Ten next season.

The NBA Draft deadline has passed and we now know who will be returning to the Big Ten next season. Inside the Hall has a great rundown of the nitty gritty, but we figured it would be a good time to revisit the Big Ten Power Rankings and see where things stand.

Wisconsin returns its entire rotation from a team that won 11 of its last 13 Big Ten games. Nigel Hayes, Ethan Happ and Vitto Brown are one of the league’s best front courts and the senior guard combo of Bronson Koenig and Zak Showalter should be more than sufficient after a year of learning how to be the featured guys in the backcourt.

I love the class of Miles Bridges, Cassius Winston, Josh Langford, Nick Ward and UNLV graduate transfer Ben Carter as much as the next guy, but they have to replace the Player of the Year (Denzel Valentine), Big Ten’s best shooter (Bryn Forbes) and a second-team All-Big Ten big man (Matt Costello). Those are significant losses, even if Bridges, Winston, Langford and Ward make immediate impacts.

It will be weird to see a Tom Crean Indiana team led by someone other than Yogi Ferrell, but the Hoosiers still have plenty of talent. Big man Thomas Bryant is potentially dominant and James Blackmon Jr. will return to the court after missing the Big Ten season with an injury. Troy Williams is gone, but O.G. Anubody could easily replace his production on both ends of the floor after showing the potential of a budding star last year. Pitt transfer Josh Newkirk and top-100 freshmen De’Ron Davis and Curtis Jones should help fill the gaps in Bloomington.

Purdue should be one of the most dominant low post teams in the county again next season with Isaac Haas and Caleb Swanigan. Haas has been perpetually waiting for his chance behind Hammons and he’s more than capable of stepping up into a starter role. Vince Edwards and Swanigan both took their name out of the NBA Draft and Swanigan will need to figure out a way to be more efficient offensively, after posting just a 96.1 offensive rating last season.

The defense should take a bit of a hit with the losses of Hammons and Rapheal Davis, but Matt Painter knows a thing or two about coaching that side of the ball.

The Wolverines return all five starters from last year’s team, but not much else. Bacari Alexander, LaVall Jordan, Spike Albrecht, Caris LeVert, Aubrey Dawkins, Kameron Chatman and Ricky Doyle will all be elsewhere next year, giving the Michigan roster a completely different look despite the carryover in starters.

Michigan has the talent to be a good offensive team, but the million dollar question is whether it can defend more effectively. Former Wright State coach Billy Donlon was hired to make changes in the Michigan defense and that improvement, or lack thereof, will be the difference between a good and average Wolverine team.

The Terps lose four starters — Diamond Stone, Robert Carter, Rasheed Sulaimon and Jake Layman — but bring back point guard Melo Trimble. The Terps have seemingly outperformed their per possession expectations over the last two seasons and now have less talent than the two previous seasons. This team certainly looks like a NCAA Tournament team that will go as far as Trimble takes them.

And in breaking news, this week just got better for Mark Turgeon as he landed a commitment from top-50 UNLV decommitment Justin Jackson.

The Buckeyes saw the majority of last year’s freshman class transfer — AJ Harris, Daniel Hiddens, Mickey Mitchell and Austin Grandstaff — but still have some talent on the roster. Thad Matta still has a great group of wings in Keita Bates-Diop, Jae’Sean Tate and Marc Loving, a good big man in Trevor Thompson and a promising lead guard in JaQuan Lyle.

But then again the Buckeyes had that same group last year and for whatever reason it never really clicked.

Iowa loses four seniors from last year’s group,Jarrod Uthoff, Mike Gesell, Adam Woodbury and Anthony Clemmons, the core of the team that finished third in the Big Ten last season. Peter Jok is coming back and pick-and-pop big man Dom Uhl showed great potential, but is that enough to get Iowa into the NCAA Tournament?

Andrew White III has star potential and opted to return to school while Tae Webster and Glynn Watson are a promising backcourt group that started to grow into their own last season. Louisville transfer Anton Gill should help fill some of the gap left from Shavon Shields’ graduation as well. Overall this is a team that has the potential to make a jump, but will have to get better on the defensive end.

This will be Chris Collins’ fourth season in Evanston as the Wildcats continue to search for the NCAA Tournament. Bryant McIntosh is one of the league’s premiere pick-and-roll players, but losing Tre Demps and Alex Olah is a big blow. Vic Law showed promise as a freshman before missing last season with a shoulder injury and big man Dererk Pardon displayed flashes of the ability to anchor the paint.

Pat Chambers welcomes his best recruiting class, featuring top-100 prospects Tony Carr and Lamar Stevens, and junior guard Shep Garner showed star potential last season in State College. This is a program that appears to be heading in the right direction and it will be interesting to see how quickly the talented youngsters can make an impact.

John Groce is squarely on the hot seat as his program faces controversy from every direction. Last year’s Illinois team had one of the best one-two scoring punches in Malcolm Hill and Kendrick Nunn and while Hill returns for his senior season, Nunn was dismissed for domestic battery.

A few things have to happen if Illinois is going to improve: Jalen Coleman-Lands needs to make the sophomore leap, Te’Ron Black needs to develop into a consistent contributor and freshman point guard Tejon Lucas needs to make an instant impact at point guard

Minnesota brings in top-50 guard Amir Coffey and three transfers — Davonte Fitzgerald (Texas A&M), Reggie Lynch (Illinois State), and Akeem Springs (Milwaukee grad transfer) — but it is hard to have a positive outlook on Richard Pitino’s program. The headlines have been dominated by sex tapes and sexual assaults and this team only won two conference games last season.

Corey Sanders is heading back to school and the Scarlet Knights have a new head coach in former Stony Brook head coach Steve Pikiell.