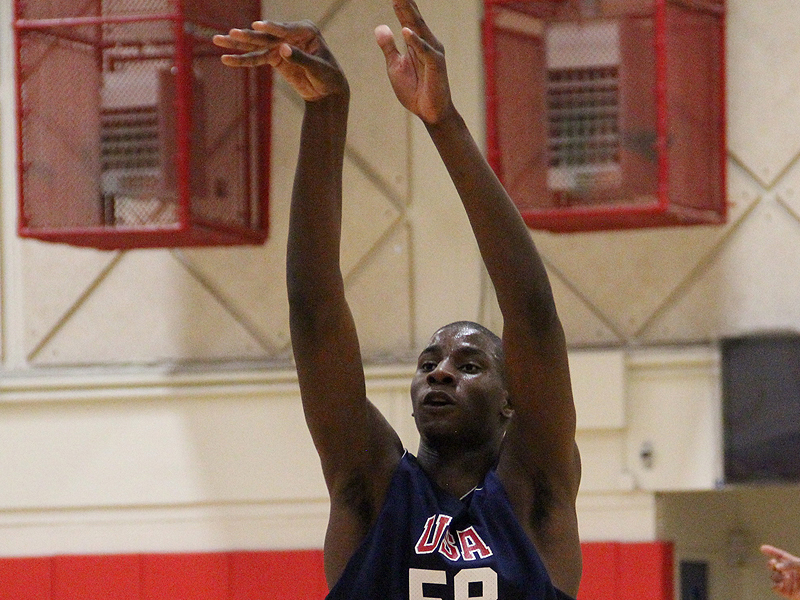 Jaren Jackson Jr. made his first appearance at a USA Basketball event this past weekend. So far, so good for the 6-foot-9 power forward from Park Tudor School (IN) as he made it through the first set of cuts at the U17 tryouts.

Jaren Jackson Jr. made his first appearance at a USA Basketball event this past weekend. So far, so good for the 6-foot-9 power forward from Park Tudor School (IN) as he made it through the first set of cuts at the U17 tryouts.

On Sunday morning, the USA roster was cut from 39 players down to 18. Jackson caught everyone’s eye during the first practice on Friday night, but he did not play up to his standards during two practices on Saturday. Even so, the length, outside shooting, and shot blocking prowess earned him at least a few more days in Colorado Springs. The final cuts are expected Tuesday in order for the final 12-man team to begin preparations for the FIBA World Championships in Zaragoza, Spain.

“It was fun,” said Jackson. “You are going against the best. It was an honor to be invited, but everyone is competing to get a spot on the team. The coaches want to see that I’m able to play with my teammates and I’m not gonna come in and ruin the chemistry. That I can fill the role. Play with the big guys in the interior and they can play around me as well.”

Currently, Wendell Carter Jr., one of the top players in the country has the starting center spot locked up, but just like in AAU, Jackson believes he can operate well with another big in the post.

“Playing with my teammates on AAU, we have a real good bond and they set me up pretty well,” said Jackson. I get a lot of threes in the EYBL which is why my points are so high, but I also play with a big guy, Xavier Tillman, so we can play the inside-outside game.”

During the spring, Jackson played in the Nike EYBL for Spiece Indy where he averaged 17.1 points and 7.1 rebounds per game. After scoring eight points in the EYBL opener, Jackson went 15 straight games with double figures including a 35 point, nine rebound performance in his third game. Jackson went for 30 points against the Nike EYBL stop in Hampton, VA.

The stellar play in the Nike EYBL resulted in a leap into the five-star status of the recruiting world as ESPN currently has him No. 25 in the nation and 247 Sports moved him up to No. 19. Overall he grades out as the No. 33 prospect in the country according to 247 Sports’ composite rankings.

Given his current status, the interest of college coaches also ratcheted up.

“Purdue has shown a lot of interest,” said Jackson. “Indiana, Michigan, Michigan State, Maryland are the Big 10 schools that are talking to me. New schools such as Kansas, Texas, Texas A&M, and Arkansas just jumped in as well.

“I like the freedom they have on offense,” noted Jackson about Michigan. “They have versatile players. You see that with Zak Irvin, he’s a versatile player. LeVert, when he was healthy also. They also utilize their wings and bigs well and get them in positions to score on offense.”

Michigan offered Jackson last fall and has stayed involved in his recruitment as it continues to grow. For now, Jackson is focused on the action on the floor and plans to play through the upcoming live periods in July before making any updates to his recruitment.