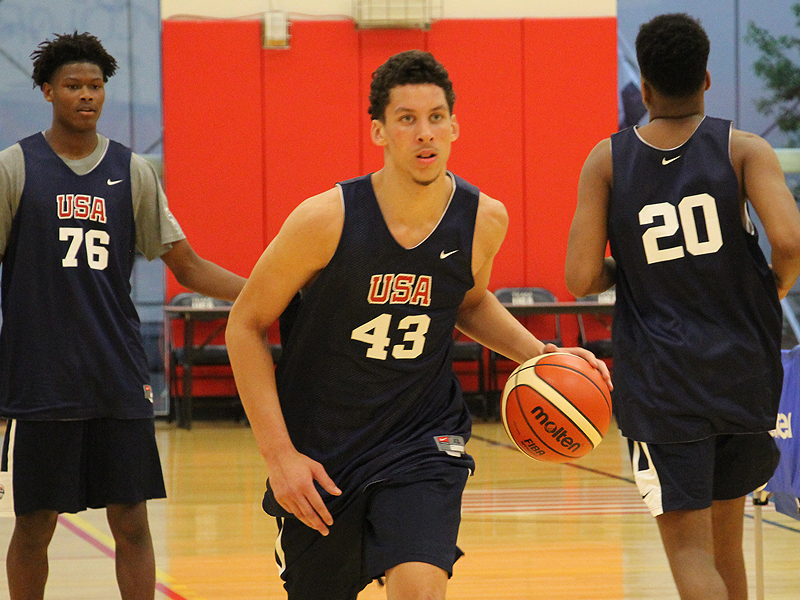 “I wanted to show I could be an all-around player,” said Johns. “Rebounding, hitting the the open teammate, and hitting the open shot, even though my shot is not falling at all this week.”

When the first set of cuts were made Sunday morning for the USA U17 team, class of 2018 small forward Brandon Johns did not find his name among the final 18. While most players sauntered out of the gym in a daze, Johns made sure to congratulate all of the players that were fortunate enough to make it to the next round.

“It’s pretty cool, pretty similar to last year, but a lot more competition this year,” said Johns. “Everyone is on top of their game, just stronger and more athletic.”

“I wanted to show I could be an all-around player,” said Johns. “Rebounding, hitting the the open teammate, and hitting the open shot, even though my shot is not falling at all this week.”

While his shot wasn’t falling, Johns did look more comfortable in his fourth appearance at a USA basketball event. He performed solidly in drills and provided versatility in the scrimmages by being able to grab defensive rebounds and start the fast break. In addition, Johns was not overmatched physically, which had been a problem in the past.

“I’m trying to show that I’m more confident in my game. I’m trying to show my versatility,” said Johns. “I kind of grew into my body at first, but then I started hitting the weight room and I’ve gotten a lot stronger and bigger.”

While Johns did not make the U17 team, he still has a busy July ahead starting with the Peach Jam for his Spiece Indy AAU team. During the spring, Spiece Indy went 9-7 and Johns averaged 8.1 points and 3.6 rebounds per game. While he only shot 33% from the three-point line, Johns exhibits a fundamental shooting stroke which should translate to the college level. He only got to the free throw line 22 times during the season and he is aware of his limitations.

“I want to work on everything, but really still my aggressiveness and confidence,” said Johns. “It’s getting better, but not all the way there.”

During July, Johns will have a variety of college coaches following his games. During the tryouts he noted Ohio State, Michigan, Michigan State, Texas, Arizona, Purdue, and Kansas had been recruiting him the hardest.

“Well, first, they are home, so close by for one,” said Johns about Michigan. “The program is great and routinely one of the best teams in the Big 10 so they of course would be a strong option for me.”

Johns is likely to be one of the first phone calls on Michigan’s list when direct contact is first allowed tomorrow to rising juniors and he should remain a Wolverine priority throughout the summer.