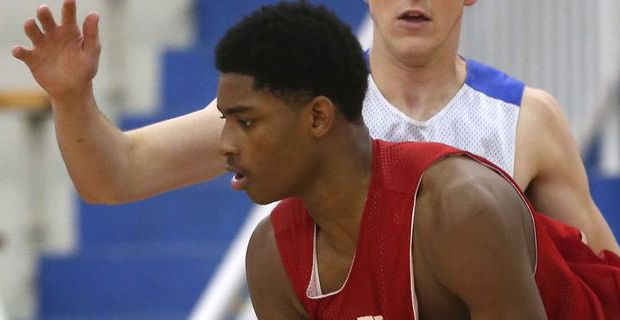 The Michigan basketball coaching staff will be active on the phones today as the calendar turns to June 15th. Today is not only the first day that Division I coaches can directly contact class of 2018 recruits, but also the day that Michigan will start extending scholarship offers to rising junior prospects.

The Michigan basketball coaching staff will be active on the phones today as the calendar turns to June 15th. Today is not only the first day that Division I coaches can directly contact class of 2018 recruits, but also the day that Michigan will start extending scholarship offers to rising junior prospects.

Don’t expect Michigan to hand out a barrage of offers as we’ve seen at times in the past, most notably two years ago when the Wolverines handed out seven offers in one day. Instead, I’d expect the Wolverines to tread more carefully as we saw last year, when the first class of 2017 offer wasn’t extended until September.

Michigan’s College Practice Camp was moved to August this year, which should provide the staff with some additional time to evaluate prospects throughout the July period and that shift could lead to far more August offers.

But with more focus finally on the 2018 class, here’s an early watch list of prospects to track in the class.

Easley is one of the top targets on Michigan’s board and took a full unofficial visit to Ann Arbor this spring. His coach described his “Michigan-type personality’ to MLive after his visit and the Wolverines are thought to be near the top of his list.

A four-star prospect and one of the top prospects in the state of Michigan, John Beilein has been tracking Johns steadily. Beilein was a common presence at his Spiece Indy Heat games during April Nike EYBL games and Johns reported that his interest in Michigan is mutual.

“Well, first, they are home, so close by for one,” said Johns about Michigan. “The program is great and routinely one of the best teams in the Big 10 so they of course would be a strong option for me.”

Johns has offers from Alabama and Iowa with interest from Kansas, Michigan State, Ohio State, Purdue and Texas along with the Wolverines.

Carmody has been to Ann Arbor for a game last season and sees himself as a natural fit. He’s also set to visit Michigan on Friday where an offer could be waiting.

“I love U of M and the entire staff,” he told Endless Motor. “They think I’d be the perfect fit in their offense and could make big contributions early.”

Carmody holds offers from Louisville, Pittsburgh, Purdue, Cincinnati, Xavier, Penn St., Duquesne and Rice. He’s a versatile wing that is hard to pin down to one position in the future, but his early offer list more than speaks for itself.

A top-100 guard out of Cleveland, OH, Cohill made the trip up to Ann Arbor with several of his OBC AAU teammates for a game this spring. Cohill is regarded as the top prospect in the state of Ohio in his class, boasts a 3.5 GPA and even showed up on Sports Center this spring. He has the coveted in-state offer from Ohio State, but should be a priority recruit for the Wolverines.

Cohill has already heard from the Wolverines today.

Ryan plays for the same Middlesex AAU program that produced Duncan Robinson and is one of the best kept secrets on the East coast. He holds offers from Davidson, Rice and Boston College with Ivy League schools keeping a close eye. He’ll need to visit Michigan to earn an offer, but the dynamic guard looks like a natural offensive fit.

Finke has an early offer from Ohio State, but recently listed Michigan, Virginia, Notre Dame and Northwestern as a few schools that have caught his eye early in the process. The Champaign native’s older brother played at Illinois, so the Illini are thought to have a leg up, but the four-star guard should have a host of options.

The Indiana native scored 54 points in a playoff game and has major interest across the Midwest. Illinois is involved along with the in-state schools — Indiana, Notre Dame, Butler and Purdue. He camped at Michigan last year and put up massive stats as a sophomore, averaging over 20 points per game.

Kithier played well at Michigan’s Elite Camp last summer and the in-state big man is one of the primary big man recruits on Michigan’s radar. He’s been to Ann Arbor for basketball and football games and has been in frequent contact with the Wolverine staff. Kithier heard from the Wolverines at midnight last night and should be a continued priority this summer.

A local product out of Ann Arbor Skyline, Wade is one of the top 2018 guards in the state of Michigan. He has several MAC offers, but also has high-major interest from Michigan and Syracuse.

“My relationship with Coach Beilein is very strong,” Wade told Endless Motor. “Living very close to the campus, it has made it easier to connect with the coaches and the players and it’s very cool.”