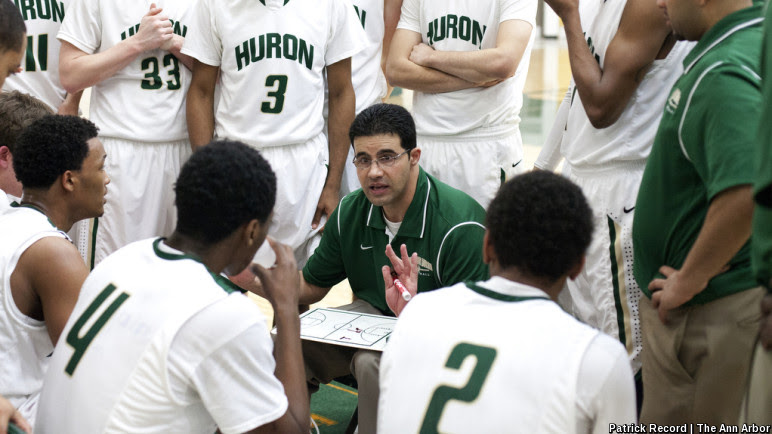 One day after former Director of Basketball Operations Pete Kahler was announced as an assistant coach at University of Detroit, Michigan named Waleed Samaha to the same position. The Wolverines also promoted graduate manager Bryan Smothers to Video Analyst.

One day after former Director of Basketball Operations Pete Kahler was announced as an assistant coach at University of Detroit, Michigan named Waleed Samaha to the same position. The Wolverines also promoted graduate manager Bryan Smothers to Video Analyst.

“We have taken great pride having a staff of high character and professional people,” said Beilein. “We are continuing that trend by hiring Waleed. Since I arrived in Ann Arbor almost 10 years ago, I was immediately impressed by Waleed as a husband, father, coach, principal and Michigan alum. He has served Huron High School and the Ann Arbor community with tremendous class and his work ethic. His passion for the University of Michigan will only benefit us as we continue to move forward with our program.”

“First and foremost as a Michigan graduate it means the world to be able to come back and work with one of the best basketball minds in the entire country in John Beilein,” said Samaha. “The opportunity to join a program with such great history and to be part of the Michigan Athletic Department is humbling and exciting.

“I never imagined I would leave Huron,” Samaha added. “I now know the meaning of bittersweet. When I took a moment to reflect on this opportunity I was so excited, however, at the same time I also realized I would be leaving an amazing place, filled with great teachers and some incredibly talented students. They are all part of my family, and even though I am leaving them that will never change. They will all be part of my life forever.

“I have so much to learn but relish this opportunity. This is an exciting time for my family and I, and I cannot wait to get started.”

After earning his undergrad degree from Eastern Michigan in 1993, Samaha received his master’s in social work from U-M in 1996. While working on his master’s, he was a graduate intern in the U-M Athletic Department working with the freshman transition program, providing individual and team counseling to promote peak performance in the classroom as well as contributing to the development of the MPACT program.

Following his graduation, Samaha spent two years (1997-99) as Ypsilanti High School’s social worker and three years as the school’s head boys’ basketball coach (1996-99). In his three seasons, the Phoenix put together a 35-31 record with one league championship and two district championship game appearances.

In 1999, Samaha moved across town to Huron High School, serving as the school’s assistant principal for five years (1999-2004). He then transitioned into the role of Huron’s social worker in 2004, a position he held for 11 years before he became an assistant principal this past year, providing leadership and guidance to nearly 900 ninth and 10th graders.

In 2002, Samaha took over the boys’ basketball program at Huron, and in his 14 seasons as the head coach his teams logged a 229-86 record, winning seven league championships and six district titles in 11 championship game appearances. In 2010, Huron reached the Class A state championship game and finished as the state runner-up, earning Samaha the title of 2010 BCAM State of Michigan High School Coach of the Year, and he went on to be inducted in the Huron High School Hall of Fame in 2014.

Following a standout collegiate career (2007-11) at Wayne State, Smothers spent two seasons as a student assistant coach (2011-13) before being moved into a graduate assistant’s role for the 2013-14 season. He spent the last two seasons as U-M’s graduate manager earning a master’s in social work.