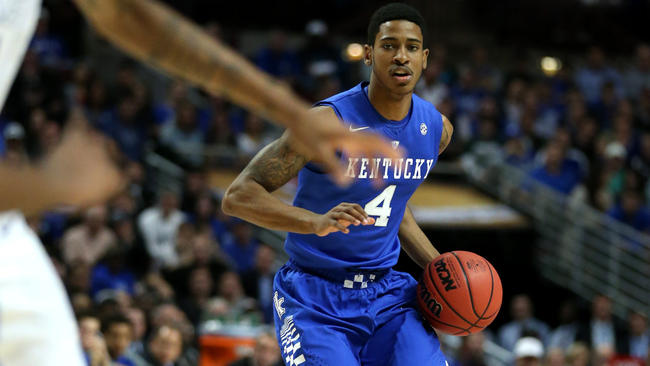 Michigan landed a commitment from Kentucky transfer Charles Matthews on Monday night. Here are some thoughts on what the Matthews commitment means for the Wolverines, how he fits into the system and what it means for Michigan going forward.

Michigan landed a commitment from Kentucky transfer Charles Matthews on Monday night. Here are some thoughts on what the Matthews commitment means for the Wolverines, how he fits into the system and what it means for Michigan going forward.

1. Athleticism that the roster needs

John Beilein spent the offseason preaching the importance of adding athleticism and defense to the roster and this move backs up the talk. Matthews has NBA-measurables for the wing position.

These measurements were all taken at Kentucky’s preseason draft combine last October and reported by DraftExpress.

In DraftExpress’ analysis of Matthews’s measurements, Jonathan Givony compares his athleticism to Zach LaVine of the Minnesota Timberwolves.

Charles Matthews has tremendous size for an NBA shooting guard standing 6’6 with a 6’9 wingspan and a 189-pound frame. Having gained just 2 pounds since last summer, Matthews is a lean athlete with great explosiveness. His 41.5 inch maximum vertical leap is terrific. He’s built similar to Zach LaVine, who at 6’5.75 with a 6’8.25 wingspan and 181-pound frame registered a 41.5 maximum vertical leap at the 2014 NBA Combine, but of course is not quite as athletic.

There’s little question that Michigan needs that infusion of athleticism on the roster, especially after the loss of Aubrey Dawkins. Matthews was renowned as a glue guy and energy player off the bench at Kentucky and that alone should be enough to get him on the floor once he’s eligible.

Matthews will be in his third year of college when he’s eligible to play for Michigan. He’ll also have a year of practice experience in Ann Arbor. That should prepare him to step in and make an immediate impact on a roster that’s losing multi-year starters in Zak Irvin and Derrick Walton.

If you pencil Xavier Simpson, Muhammad-Ali Abdur-Rahkman and Duncan Robinson into the starting lineup that season, Matthews seems like a natural fit as a slasher and defender with that group. That leaves Jordan Poole, Ibi Watson and DJ Wilson as additional wing options off the bench to go along with any other prospects that Michigan signs in the 2017 class.

Looking ahead to the 2017 class, there’s still room to add in the positions where Michigan originally focused. With three spots remaining, I’d expect the focus to continue to be at the combo forward area and on the wing with the chance of adding another combo guard to the mix. I’d expect the offers that Michigan has outstanding — Kyle Young, Jaren Jackson, Jamal Cain, Kris Wilkes and Brian Bowen — to continue to be priorities for the Wolverines.

3. Jump shot is a legitimate concern

Given his raw tools, the question will be how much can Matthews improve skill wise before he steps on the floor for Michigan.

His track record at Kentucky doesn’t inspire much confidence about his ability to shoot the ball at a high level — a necessity at a place like Michigan.

Over half of Matthews’ shot attempts were within five-feet of the basket last season and he was just 5-of-22 (23%) on all shot attempts outside of that range. His free throw shooting is another red flag. Matthews made just 14-of-34 (41%) free throw attempts last season in Lexington.

John Beilein is known for his ability to teach offensive skill and shooting, but this will be a real test for him. Matthews’s stroke doesn’t look awful mechanically, but this redshirt year will be critical for improving his shooting ability from the perimeter.

Glenn Robinson III thrived at Michigan for two years because of his ability to score without needing a play drawn up for him. Robinson was a great cutter and reader of the game and could also contribute with a few put backs and lob plays. Matthews fits that mold perfectly and the majority of his scoring as a freshman came off of putbacks and cuts to the rim.

Even if Matthews struggles with his jumper early on in his Michigan career, there will be a role for him on this team to slash, find easy baskets and attack the rim.

Michigan hasn’t had much of any luck recruiting the city of Chicago of late and in many cases hasn’t even tried. One player doesn’t start a trend, but Matthews gives the Wolverines an outlet into the city and is one of several recent connections to the area.

Billy Donlon is originally from outside of the Chicago area, 2017 commit Jordan Poole is a Milwaukee native, but he’s playing for the Chicago-based Mac Irvin Fire and two of the latest recruits to draw new interest are from the Windy City: Justin Smith of the Mac Irvin Fire and Nojel Eastern who plays for the Meanstreets program that produced Matthews.

6. Anything left for this year?

While there’s a natural fit for Matthews to step in and contribute after a redshirt season, Michigan’s roster still feels one short on the wing for the upcoming season.

At this point I don’t think anything other than a graduate transfer would make sense, but I’m also not sure that there are many options out there which would be a fit for both parties. If Michigan’s roster holds pat, there will be considerable pressure on Ibi Watson and DJ Wilson to grow into contributors off the bench for this team to provide some additional depth.