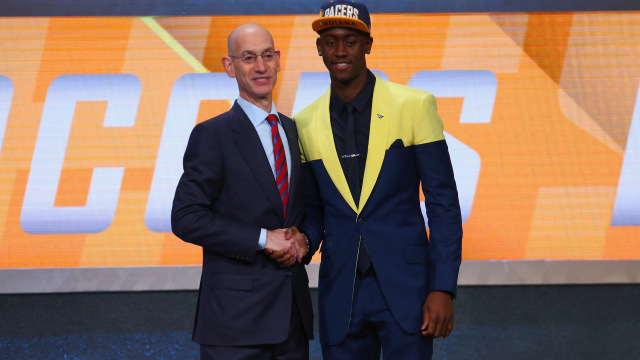 After battling through three foot injuries, Caris LeVert still heard his name called during the first round of the 2016 NBA Draft. Read LeVert’s comments from the podium after the jump.

After battling through three foot injuries, Caris LeVert still heard his name called during the first round of the 2016 NBA Draft.

The Brooklyn Nets (via Indiana) selected LeVert with the No. 20 pick in the draft. Here are LeVert’s comments on the podium after being selected.

CARIS LeVERT: I’m really blessed to be in this situation. None of this was possible without God, my family, and all my teammates and coaches throughout the years. I’m blessed to be here, like I said. Through all the adversity I went through the past couple of years, I’m lost for words right now to be here.

Q. Caris, you had the suit for the Pacers but now going to Brooklyn. This will be your building. Have you thought about that? What about the fit in Brooklyn?
CARIS LeVERT: Yeah. You know, I went for a visit about a month ago. I knew the staff really liked me but I didn’t know if they had any first-round picks. But I’m blessed to be part of this organization. Blessed to be in a great city, as well. Happy to be here.

Q. What’s the status of your rehab? Are you going to be ready to go for Summer League?
CARIS LeVERT: I probably won’t be doing Summer League, but my X-rays and CT scans look good. It’s just a matter of rushing back right now.

Q. Going to a team in Brooklyn that’s probably going to take a longer road to getting to where they want to be. They had to trade to get you essentially. They have a lot of young guys on that roster. Are you ready for the long haul here?
CARIS LeVERT: Yes, for sure. I’m a long-term thinker, a long-term type of guy, always have been. I’m just excited. I know it’s a lot of work to be put in right now, but I’m just excited to get to this point.

Q. You’re going to be playing in a pretty big market. How do you see yourself contributing to the team next year? And then looking forward to your career, what’s your ceiling here?
CARIS LeVERT: I’m just trying to do whatever it takes. Next year as a rookie, I know rookies have a tougher role on the team, but I’m ready to fulfill whatever role the team needs me to do. And then for the long haul just get better, be one of the guys for the team.

Q. You mentioned all the things that you’ve gone through the last couple years and you got a chance to put those feelings into words a couple days ago. How important was it for you to tell your story on your own terms?
CARIS LeVERT: It was great because I feel like everybody else was telling my story and speaking for me, so I feel like that was a great opportunity for me to speak for myself, and I think it got some great reviews from it.

Q. You’re going to be playing here in Brooklyn. What do you know about Brooklyn? What do you know about New York in general?
CARIS LeVERT: I know it’s a great city. I played here a couple times in college. We played in this arena. I’m a Midwest guy, so I’m not from far away from here, but like I said, it’s a great city and I’m glad to be here. I’m ready to work my butt off.

Q. You have some famous ties to a well-known family in Philadelphia. Talk about that.
CARIS LeVERT: Yeah, well, the LeVerts are you speaking of? Yeah, those are my third cousins, my grandfather’s first cousins. Yeah, they’re from the Cleveland area.

Q. Are you almost relieved to go to a team like the Nets where currently there’s not many players on the roster, last year there was a lot of D-Leaguers who got big minutes late in the year? Do you think you’re going to have a sizable role?
CARIS LeVERT: I’m not really sure what type of role I’ll have. Right now it’s still early. But whatever role they give to me, I’ll be ready to fulfill that role.