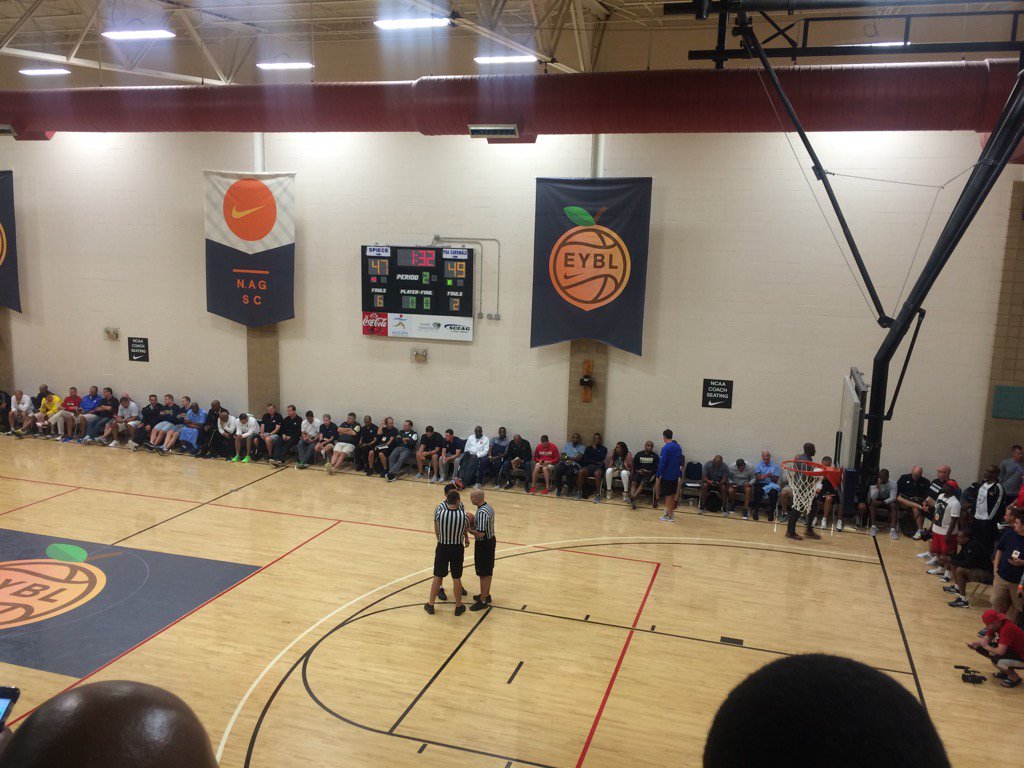 Michigan’s coaching staff was on the road across the country over the last five days checking in on various AAU events around the country. The Nike Peach Jam was the premiere event nationally, but Wolverine prospects were in action at a host of other events as well.

Here’s a rundown of who Michigan coaches watched and how they played.

Michigan’s coaching staff was on the road across the country over the last five days checking in on various AAU events around the country. The Nike Peach Jam was the premiere event nationally, but Wolverine prospects were in action at a host of other events as well.

Here’s a rundown of who Michigan coaches watched and how they played.

Davison has been on a whirlwind visit tour and a decision could be coming soon from the 6-foot-3 shooter. Wisconsin is one school high on his list, but Davison has also tripped to Stanford and many others. Duke is one additional school that has started to show interest in one of the best shooters on the Nike EYBL circuit.

Bowen averaged 22 points per game at Peach Jam, elevating his game on the biggest stage. He shot 57% from the field and 35% from three-point range. He’s emerged as one of the best scorers in the country.

Bowen was one of the top scorers in this year’s field. The lanky 6-foot-7 wing put points on the board in high volume but also in versatile ways. He’s unique at this young age because he’s a true 3-range scoring threat. Like Porter, he has the ability to score over smaller defenders in the half-court but is also excellent in space, whether it’s getting out in the open floor or catching it on the move. Perhaps most impressive though is the fact that Bowen is making a habit of playing his best basketball when the lights are on the brightest. Earlier this winter we saw him raise the level of his game at Dick’s Nationals and this week, he did the same on the biggest stage the EYBL has to offer.

Eastern averaged 10.2 points per game and shot 44% from the floor (1-of-8 from 3-point range). Eastern recently visited Michigan and an offer could be on the way sooner than later. Right now he’s in no rush to make a decision.

“I’m still going through the recruiting process,” Eastern told Rivals. “I don’t know what schools are going to offer me or start recruiting me, so I’m open minded.”

Isaiah Livers had a quiet weekend, averaging 8.8 points per game, but knocking down 6-of-15 threes.

Kyle Young back in action, will take five officials

Kyle Young missed some time in June with a sports hernia injury, but returned to action in a big way at Peach Jam. Michigan head coach John Beilein was keeping a close eye on him throughout the weekend in Augusta.

The King James Shooting Stars opened up a can of you know what on the Las Vegas Prospects Thursday night and a lot of it had to do with the inspired, efficient and tough play of 2017 four-star forward Kyle Young. With Tom Izzo and John Beilein among those watching from courtside, Young only missed one shot while scoring 24 points and grabbing eight rebounds in a blowout win. He’s blue collar with a dose of athleticism and sweet shooting and still looks to be a bit underranked by us after a recent move up to No. 109 nationally.

Young told 247Sports that his next step will be cutting down his list to five and taking all five official visits.

“I have visited all of the schools on my list unofficially except for Florida, N.C. State and Wisconsin,” Young said. “I still have to figure out the five official visits I want to take. Those will be the five I cut it down to. I want to use all five visits.”

Asked what will impact his decision, Young said, “Obviously, they are all good basketball programs on my list. They all provide a good education. It could come down to my relationship with the coaches and players there and how I will fit into a program.

On Sunday, Beilein made the trip to the Elevate Hoops Summer Icebreaker in Philadelphia, PA to check in on class of 2017 point guard target Eli Brooks.

Brooks has flown under the radar, but Beilein, Villanova’s Jay Wright and Iowa’s Fran McCaffery all spent some quality time watching him on Sunday

Brooks reportedly visited Michigan this spring and Villanova is his self-proclaimed dream school.

Each performance is becoming more and more critical with just a few weeks left of the AAU season before Brooks returns to Spring Grove for his senior season. He already has roughly 15 Division I scholarship offers in hand including offers Kansas State and George Mason. He’s also been on visits to Michigan, Villanova and Ohio State in recent weeks.

“I think there’s more pressure on parents and coaches to try and let everything work out,” Jersey Shore Warriors head coach Tony Sagona said. “I think the kids just go out and play and a great player like Eli just goes out and does his thing. Toward the end of July if they don’t see the coaches calling, then they put more pressure on themselves. But in Eli’s case, as he sees more of the top schools calling in, he’s getting more relaxed because he has offers.”

Jamal Cain and The Family just missed out on a trip to the Peach Jam, but Cain filled up the stat sheet at the Peach Invitational, an event for EYBL teams which missed out on qualification.

Cain averaged 19.8 points per game at the Invitational and knocked down 13 of 27 threes in his final three games of the weekend.

It wasn’t a great weekend for Michigan commit Jordan Poole at the same event. He averaged 10 points per game and struggled to get his three-point shot on target throughout the tournament.