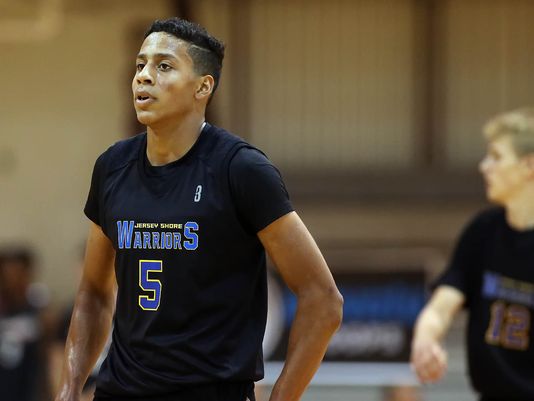 Eli Brooks committed to Michigan on Tuesday night. Here’s everything you need to know about the new Wolverine point guard.

Eli Brooks committed to Michigan on Tuesday night. Here’s everything you need to know about the new Wolverine point guard.

Brooks was offered by Villanova and Ohio State in the last week and was one of the fastest risers on the circuit this July. He also held offers from Rice, Kansas State, La Salle, Penn, George Mason, Monmouth and Drexel among others.

Brooks was on record calling Villanova his dream school and he grew up cheering for the Wildcats, but he visited Michigan in June and the relationship grew from there.

“They just mutually started liking (each other) more and more, and (Beilein) being around and showing him that love, and how (Eli) felt when he went on the visit, how much he saw how they were really into him,” his father James Brooks told COBL. “I think that’s what really turned it around.”

John Beilein had been watching Brooks closely over the last two weeks of the evaluation period.

Brooks is unranked by most media outlets, playing his AAU ball with the Jersey Shore Warriors. Listed at 6-foot-1, 170 pounds, Brooks averaged 25 points per game for Spring Grove as a junior. He also dished out 67 assists on the season and knocked in 79 three-pointers, leading the Rockets to a league championship.

Brooks is known as a quick, scoring point guard with range out to the three-point line according to most reports.

Strengths: In his area, Brooks is known as a scorer, putting up over 25 ppg for Spring Grove High School as a junior. However, his biggest strength is his ability to run a team. Brooks plays the game at a great pace. He never allows the defense to speed him up, and makes his teammates better every time he touches the floor. His jump shot has continued to improve and he his now knocking down outside shots on a consistent basis.

Weaknesses: One concern for Brooks heading into the summer will be his lateral quickness. During the high school season he is not challenged to defend on a consistent basis; it will be interesting to see during the AAU season how he keeps more athletic guards in front of him.

Overall: A super-stock riser over the last few months, Brooks’ amazing 2016 summer was capped off with a commitment to Michigan. But he’s proven he’s a true high-major guard of late — he’s completely unflappable, limits his mistakes as well as anybody around, and is a knockdown shooter from all over the court who also makes his teammates better both in his style of play and his leadership. Has been a winner at every level and will only make a program better at the high-major level, even if he’s not a four-year starter.

Eli Brooks of @JSWarriors at #SummerJamfest. The 6'1 '17 walked out with an offer from Villanova! pic.twitter.com/rnRlnwmgWM

Brooks fills the second point guard niche on Michigan’s roster starting in 2017-18. He should serve as a backup to Xavier Simpson in his first season and pack a scoring punch off of the bench. He’s under the radar right now, but grabbing a kid who has been on a tear throughout July — and has been picking up offers in a hurry — feels like a good get.

Michigan’s 2017-18 backcourt will now feature Xavier Simpson, Muhammad-Ali Abdur-Rahkman, Eli Brooks, Jordan Poole, Charles Matthews and Ibi Watson. There will be a lot of changeover in that group as the Wolverines pivot away from a Derrick Walton-Zak Irvin pairing, but there is also a lot of talent and what’s starting to develop into an intriguing mix of skillsets.

With Brooks and Jordan Poole in the class of 2017, that means that future point guards like Nojel Eastern and transfer Lamonte Bearden are presumably off the table as options.

Michigan has two scholarships remaining and I’d expect them both to go toward wings and/or combo forwards. The primary focus on 2017 prospects will be on offers such as Jamal Cain, Kris Wilkes, Kyle Young, Jaren Jackson and Brian Bowen. Four-star forward Isaiah Livers is also expecting an offer in early August.