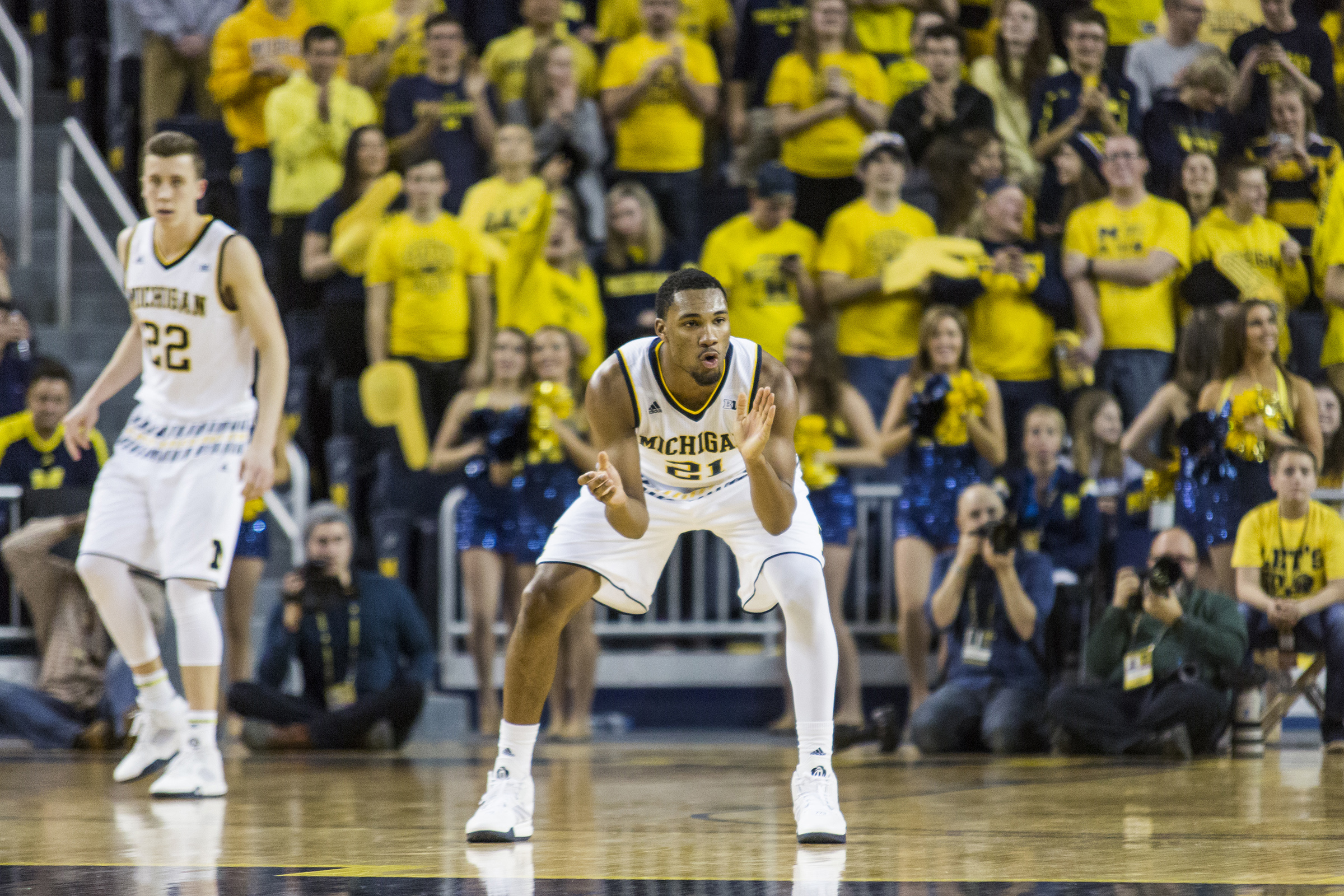 In today’s mailbag, we examine some film of Kentucky transfer Charles Matthews, discuss Michigan’s recruiting philosophy and break down what Michigan needs out of the four position.

I think it is probably a bit too early to tell where Matthews plays and I wouldn’t read too much into the roster designation before someone has even played a game in Ann Arbor.

Thinking about this question I went back and watched film of every shot that Matthews made last year at Kentucky and — right now — he definitely plays like a three in Michigan’s offense. He didn’t play off of ball screens or isolations (that responsibility went to Tyler Ulis and Jamal Murray) and did most of his work attacking closeouts with straight line drives to the hoop, cutting to the rim or getting on the offensive glass.

For a refresher, here’s the footage of Matthews’ 23 made field goals last season.

On the other hand, Matthews didn’t transfer to play the exact same role that he played at Kentucky last season. He has a yearto expand his ball skills and work on his jump shot, developing into a more complete offensive player.

The other factor is the other personnel on the roster. Xavier Simpson, Muhammad-Ali Abdur-Rahkman, Eli Brooks and Jordan Poole all look like more natural fits to play lower down the lineup than Matthews in 2017-18. These guys are all more natural handlers that can use ball screens and kick the ball to Matthews on the wing and allow him to slash to the rim, or throw up an alley-oop as he cuts along the baseline.

So right now, I’d pencil Matthews in as a three. If Michigan signs a couple of bigger wings that demand immediate playing time then maybe he slides down to the two. But maybe the most likely outcome is that Matthews plays the three in his first year and develops into a guy that can play the two or three in his second season.

wolverheel: Who’s the next Michigan target that is expected to commit, not necessarily to us but just in general?

I think that Kyle Young and Isaiah Livers are two offered targets that should begin taking official visits shortly and then start moving toward a decision. Young recently announced a top-five while Livers added the two major in-state offers from Michigan and Michigan State.

Colby: Who is the next 18 recruit to get an offer, does Cormac Ryan get one at the Elite Camp?

I think Cormac Ryan is the safe bet, assuming he plays well at Michigan’s College Practice Camp in early August. Ryan has emerged as a Michigan priority and is a perfect fit for the Wolverine offense. The College Practice Camp has always served as a critical piece of Michigan’s underclassmen evaluation and I’d expect more of the same this offseason.

MrLG: If Mark Donnal has a good season in 16/17, can he be reclassified to stay another year? And do you think this is likely?

There’s no rule preventing him for being reclassified, but there are probably still too many factors to say whether it is likely. Donnal’s status was changed from redshirt sophomore to junior shortly before last season and entering this year he’s listed as a senior. That tells us that his status hasn’t changed yet.

I think, right now, Michigan will continue to recruit as if Donnal is a senior. If he goes on a tear this season and has a breakout year, then maybe that starts a conversation in the spring.

Moritz Wagner, Austin Davis and Jon Teske’s development this year will play almost as big of a part of the equation as Donnal’s. Maybe one of the freshmen big men struggle to compete at this level or some other sort of attrition comes up and it makes sense to keep Donnal for another year. Bottom line is that I’d be surprised if Michigan carried four five-men on the 2017-18 roster.

with recent CB's having Kris Wilkes to Michigan by national experts, what's your thoughts on the situation?

I can’t speak for anyone’s rationale for putting in Crystal Ball projections, but I’m not sure I would call two or three projections a ‘situation’.

Wilkes isn’t close to a decision and he’s most likely going to wait until the spring to decide. That means the first step for Michigan will be making his final five and securing an official visit. Right now it sounds like UCLA and Washington will get officials, leaving three additional spots in his final five. Michigan got Wilkes on campus and that was critical this summer, but there’s still a long way to go in this recruitment.

I was actually just having a conversation about this with another Michigan beat writer and I think there’s a lot to digest.

New assistant coaches bring new connections and have new ties to certain areas. I don’t think it’s a coincidence that Michigan has been far more involved in Chicago — Charles Matthews, Nojel Eastern, Justin Smith, etc. — now that Billy Donlon is on the staff. Saddi Washington opens up some different doors with his relationships across the state of Michigan.

The Matthews signing was particularly intriguing because I’m not sure if that’s the sort of transfer that Beilein would have gravitated to in the past. I think Matthews is a legitimate sign that Beilein is serious about improving the defensive abilities and athleticism on the roster.

But at the core, I think John Beilein and his staff are still recruiting with the same principles. They still have the same requirements to offer prospects — June 15th after sophomore season, a visit to campus with an academic tour, transcripts in order, serious mutual interest, etc. Those haven’t changed and I don’t think they will any time soon.

It’s fair to point toward some general shifts. I think the biggest is that Michigan is more aggressively recruiting around attrition — a natural shift after facing so much of it in the last few years and botching a few notable situations.

Some other elements like early offers or quantity of offers at the different times in the process comes down to situation more than anything. There have been years when Michigan handed out a bunch of early offers (2013, 2014, 2016) and other times it hasn’t (2015, 2017, 2018). Those situations have much more to do with who has visited and how much mutual interest there is at the time.

At the end of the day, trying to evaluate Michigan’s recruiting strategy is a futile task because we only have so much information. We’re attempting to analyze a handful binary decisions (who to recruit, whether to offer, etc.) with dozens of differing individual factors within a given class year and then attempt to paint a broad strategy.

what player's 3 point shot is going to see the largest improvement this year? % or # of shots. Exclude Zak b/c of injury last year

Among returning players, the three-point shooting breakdown looks like this:

I’m not sure I would necessarily expect any of the attempt numbers to skyrocket this season. With the same starting five returning the distribution should be similar.

Irvin is the one guy you excluded, but his three-point percentage has dropped by 43% to 35% to 30% over three years in Ann Arbor. On the other hand, he did start to turn things around in the Big Ten season last year, making 38% of his threes, a sign that maybe the injury had a greater effect on his shooting. For Michigan to make a leap, Irvin is going to have to make a leap, especially from the three-point line.

The four position is a wing in Michigan’s offense and there’s a reason that John Beilein started referring to the position as ‘right side’ and ‘left side’ wing a couple of years ago. That’s not just a Michigan shift either, the four position is shifting across basketball, especially at the college level. There aren’t many teams built like Purdue that run out a massive body like Caleb Swanigan at the four.

Run down the list of players that the Wolverines are recruiting at the four — Kyle Young, Jaren Jackson, Isaiah Livers, etc. — and those are all the type of players that could thrive at the position in Michigan’s offense. They also have more capability to guard opposing fours than Michigan has had in recent years, and that’s certainly a key.

Michigan won a lot of games with Glenn Robinson III at the four and while he wasn’t perfect, he had some of the tools that you need out of the position. He was an elite finisher and provided an outlet for driving guards, he was athletic enough to rebound and defend against a number of different players and he could at least be a threat from the corner from time-to-time.

Since Robinson declared for the NBA Draft, Michigan hasn’t found an option that can replace that. Zak Irvin has battled, but he’s not a great fit for the position overall. Kameron Chatman was supposed to be the perfect fit, but his game never materialized. DJ Wilson hasn’t been able to take that jump yet, Duncan Robinson hasn’t shown the strength to defend the spot yet.

Because of those struggles, I would say that the final two spots in the 2017 class might be the most important. Michigan needs to find versatile wing options that can defend, rebound and hit shots from the four position to re-balance the roster.