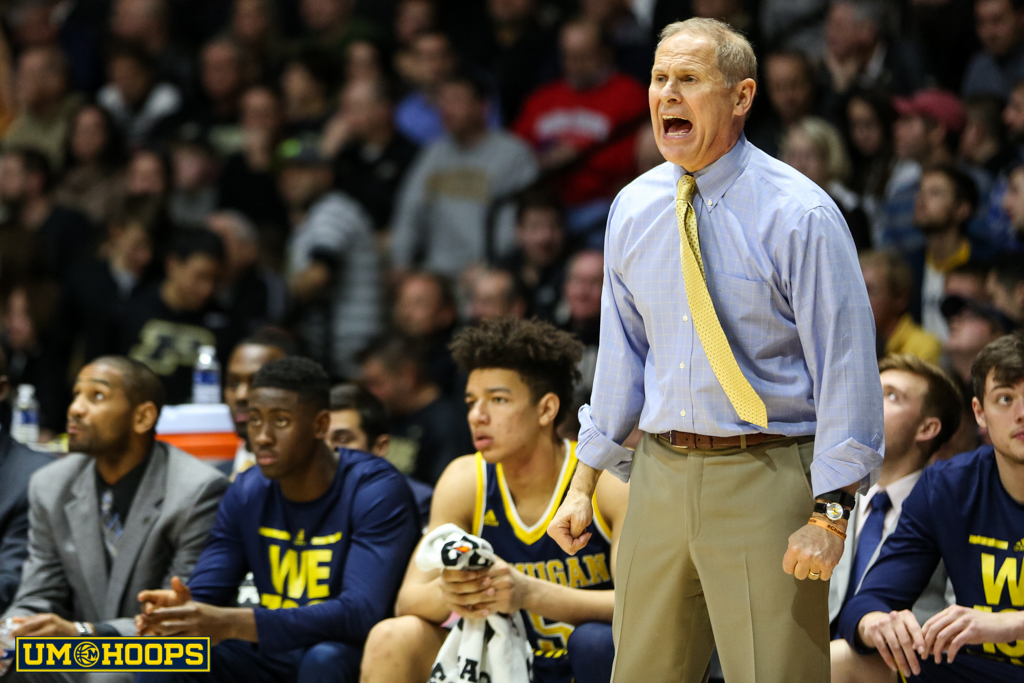 Michigan will host its annual College Practice Camp on Saturday and plenty of key visitors are expected in Ann Arbor for the event.

Michigan will host its annual College Practice Camp on Saturday and plenty of key visitors are expected in Ann Arbor for the event.

The camp is shaping up to be a proving ground for several class of 2018 prospects that are battling for scholarship offers.

2018 guard Cormac Ryan blew up nationally near the end of the July evaluation period and is expected on campus. The Wolverines have reportedly been at every game that Ryan played throughout July and it’s clear that he’s a Michigan priority. Ryan is a versatile guard who can score at multiple levels and plays his AAU basketball for the Middlesex Magic, the same program that Duncan Robinson played for.

Forwards Kevin Easley and Thomas Kithier are also expected for college practice camp and should be playing for offers. Easley told MLive that he’s hoping for a scholarship offer.

Top-100 2018 SF Kevin Easley tells @MLive he'll be at Michigan's Elite Camp on Aug. 6 and is hoping to land a scholarship offer on the visit

Easley visited Michigan in June and has high interest in the Wolverines. Kithier added a Michigan State offer in June and is one of the top forwards in the state of Michigan.

Currently the Wolverines have one scholarship offer outstanding in the 2018 class, to four-star forward Brandon Johns. That could change after a weekend of visits and evaluation in Ann Arbor.

Michigan is also expected to host class of 2019 in-state star Romeo Weems is also expected on campus for camp. Weems was recently measured at 6-foot-4, 203 pounds with a 6-foot-11 wingspan at a recent Nike event. He drew rave reviews from Rivals in Orlando in July.

Rising sophomore Romeo Weems plays with the kind of determination and focus you would expect from a rising senior. Playing for The Family 15U team Weems, who turned 15 in June, did everything but hit a three-pointer on Thursday. Weems attacked the rim, was a good passer on the move and showed good court awareness for a young player. On defense he used footwork and covered lots of ground in the lane. Weems listed early interest from Xavier, Michigan State, Michigan and Ohio State.

Jimmy King and Juwan Howard kicked off the Fab Five Basketball Camp in Saline yesterday and Jalen Rose and Ray Jackson are expected in this week.

MLive’s Brendan Quinn was at the camp and wrote about what could be the next steps for a true Fab Five reunion, a process that will start with the Fab Five Symposium this fall.

“If you have a problem, go to that guy, go to that man,” King said of the accord. “If someone says something and whether it’s written out of context or not, directly go to that person. Don’t continue to feed into the negativity and make a response without talking to that person directly.”

After the camp, Juwan Howard stopped by Michigan’s campus and did a chalk talk with the Wolverine coaching staff.

Always getting better. Look who dropped by to talk hoops with us @JuwanA_Howard #GoBlue #FabFive pic.twitter.com/cSIL01s6ej

Howard told the Free Press that his bond to Michigan is deep and he’ll do anything to help the program.

“The University of Michigan runs through his system and vice-versa,” Howard said. “I want to learn, I want to grow as a coach and he wanted to see what he can do to help out his program. So I was willing to help out and am always willing to lend a hand.”

Class of 2017 forward Justin Smith doesn’t have a Michigan offer yet, but he named Michigan in his top seven. Smith is expected back on campus for an unofficial visit on August 14th.

The Wolverines made the cut along with Indiana, Xavier, Illinois, Stanford, Villanova, and Wisconsin. Smith is expected to visit

I'd like to thank all the coaches who have recruited me thus far. These are my final schools in no particular order! pic.twitter.com/NfcXGkGLVt

The Michigan coaching staff spent considerable time tracking him throughout the July evaluation period and he elevated his game as the live period wore on. The 6-foot-7 forward could be next in line for a 2017 Michigan offer.

Kris Wilkes announced a top 11 over the weekend and Michigan made the cut. Wilkes is expected to make an additional cut in the next couple of weeks, according to the Indy Star.

North Carolina, Arizona, Butler, UCLA, UConn, Indiana, Ohio State, Illinois, Washington and Xavier also made the cut. Wilkes has reportedly settle on his first two official visits as well and they will be to UCLA and North Carolina.