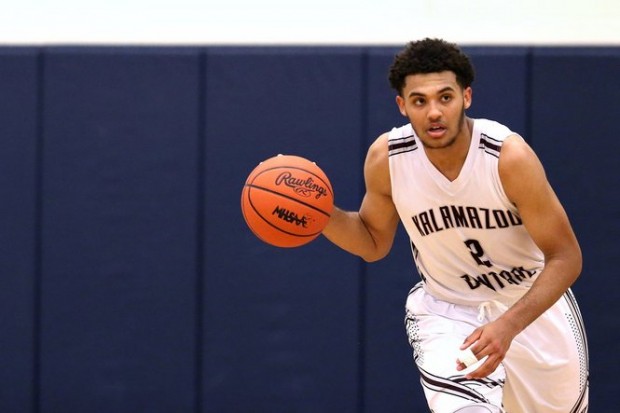 Here’s a breakdown Livers’s game and recruitment and how he fits into Michigan’s class.

Here’s a breakdown Livers’s game and recruitment and how he fits into Michigan’s class.

Livers is a 6-foot-8, 210 pound forward who averaged 14 points, 10.4 rebounds and 2.3 blocks per game as a junior at Kalamazoo Central last season. He saw his stock rise quickly this spring when he started playing on the Nike EYBL circuit.

Livers averaged 9.4 points and 5.2 rebounds in 23.4 minutes per game on the premiere Nike circuit, helping Meanstreets qualify for the Nike Peach Jam in July.

Livers held more than 15 scholarship offers, but the most notable suitors were Michigan, Michigan State, California, Butler and Minnesota. He had previously planned on taking fall visits to both in-state schools, Cal and Butler.

He’s regarded as a four-star prospect according to 247 Sports’ Composite Rankings and ESPN rates him the highest at 69th nationally.

Livers stands out with his ability to shoot the ball at all three levels — around the basket, in the mid-range and out to the three-point line — combined with his raw athleticism and rebounding ability. He shot the ball very well on the Nike EYBL circuit where he knocked in 42% of his threes, 52% of his mid-range jumpers and 65% of his shots at the rim.

He has a high release on his jumper and also gets great elevation when he shoots, a major reason that he’s able to make so many contested mid-range jumpers. He’s not going to necessarily be a playmaker off the bounce early on in his career, but his ability to stretch the floor will be critical for offensive spacing. He also can provide much of the athletic finishing ability that the Wolverines have been lacking since the departure of Glenn Robinson III.

It was Livers’ big AAU moment Friday night, up against CP3’s 6-10, 260 All-American Wendell Carter. With the head coaches from MSU, UM, Notre Dame, Purdue, Creighton, Xavier, USC, Georgia Tech, Texas, Illinois, DePaul, UCLA, EMU and WMU watching baseline, Livers delivered. He stepped out and knocked down three-pointers even with Carter contesting. Looked really confident when pulling up on the break to nail a 3. With his 45-pound advantage, Carter returned the favor on the blocks where Livers at least fought and fouled. Meanstreets won after leading the whole way. His athletic overall feel and college frame will allow Livers to fit in myriad college systems from the best leagues.

Strengths:
Livers is a undersized stretch power forward with very good perimeter shooting skill especially from 17-20 feet off the catch or rhythm dribble. He is versatile and can be a difficult match up on the perimeter for less mobile power forwards.

Weaknesses:
In addition to adding strength Livers to become more of a physical presence he will also need to put together a low post scoring package to go along with his perimeter scoring ability.

Bottom Line:
Livers skill and shot making on the perimeter make him a major college forward. He must continue to add to his game but he has excellent upside.

With three commitments in hand, all ranked in or around the top-150 nationally, Michigan’s class is starting to come together heading into the fall.

The Wolverines have a point guard (Brooks), a wing guard (Poole) and now a four-man in Livers. Kentucky transfer Charles Matthews will also be eligible next season, giving Michigan another athletic option on the wing.

It’s not an understatement to say that Michigan has struggled to find a combo forward that can defend opposing fours, hit open shots and pass and handle the ball well enough to keep the offense flowing. On paper, Livers checks all of those boxes.

Livers brings a lot of the same things to the table that Kyle Young would have provided at the four spot, but he might have even a higher ceiling due to his length and athleticism.

The Livers commitment also means that the Wolverines are down to one open scholarship. That scholarship should go toward some sort of a wing that has a bit more playmaking ability. That means Jamal Cain, Brian Bowen, Kris Wilkes and Nojel Eastern are the prominent offered prospects left on the board.

The bigger question will be whether the Wolverines are content to wait until the spring to sign a wing — Bowen, Wilkes and Eastern are all planning spring decisions — or if they will try to lock down the class before the early signing period.

Four-star forward Justin Smith was expected to visit Ann Arbor next week and we will see whether Michigan sees him as more of a three or a four, and how aggressively they pursue him compared to some of the other wing targets on the board.