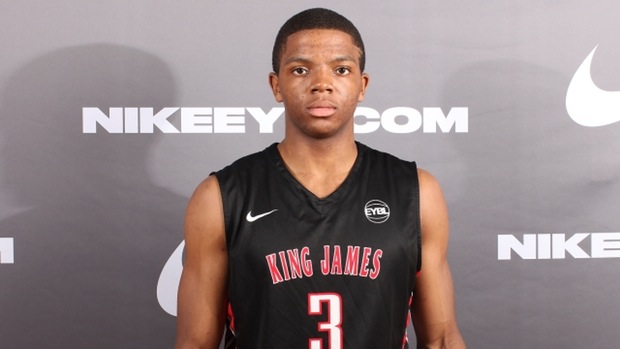 A week before Xavier Simpson committed to Michigan, he had barely been mentioned as a Wolverine recruiting target. All of the attention had been on Detroit Jesuit point guard Cassius Winston and Simpson was already close to a decision and had just announced a list of four finalists that didn’t include Michigan.

Then after a couple of phone calls, Simpson stopped by Ann Arbor on the way back from an official visit to Wisconsin. The rest was history as Simpson pledged to John Beilein and his staff just days later.

Simpson went on to be named Mr. Basketball in the state of Ohio and he carried Lima Senior to the OHSAA State Championship game before falling one victory short of the ultimate goal. Along the way he put up some monster scoring games (59 points, 65 points) and big performances and cemented his place as a top-75 recruit.

If the story sounds familiar, it should. The parallels between Simpson’s recruitment and prep development and Trey Burke’s are eerie. Back when Michigan was pursuing Burke, he was the second point guard on its board and the thought was that the Wolverine staff would wait for Kevin Pangos to make a decision.

In the end, they offered Burke rather than wait for Pangos. Burke went on to win Mr. Basketball and took Northland to the state finals before dominating for two seasons at Michigan.

The comparisons in situation are so obvious that they are hard not to point out, but they also setup an unfair expectation for Simpson. He’s the highest rated member of Michigan’s incoming class and he should step immediately into the backup point guard role behind Derrick Walton, but it’s unfair to expect him to follow a similar career trajectory to Burke.

Here’s a shot chart of Simpson’s play during the Nike EYBL circuit and five games at Lima Senior last season courtesy of Krossover.

Simpson is going to play from day one in Ann Arbor. Last year Derrick Walton was forced to play 90.8% of available minutes in Big Ten play — the second most in the conference — as he was backed up by only Andrew Dakich. The point guard position isn’t an easy place to be a star as a freshman, but Simpson should be an immediate upgrade to Michigan’s backcourt depth.

For Walton, having a legitimate backup will be a terrific luxury. He won’t have to worry about pacing himself to try to play 38 or 39 minutes every night, avoiding foul trouble and running the team.

Simpson’s adjustment to the college level could shape how Michigan’s guard rotation shakes out. If he excels, it wouldn’t surprise me to see Beilein go with a two point guard look and allow Walton and Simpson to share the floor at times. The Walton, Abdur-Rahkman and Simpson trio could be all that Michigan needs to cover the 80 minutes available between the two guard spots. Walton’s catch-and-shoot and rebounding ability would enable a two-guard look like that to be successful, even if just for 5 to 10 minutes per game.

Simpson is the future of the point guard position at Michigan and, unlike the last three point guards in Ann Arbor, he’ll actually have a year to learn from a veteran.

“He understands the position,” Simpson’s father Quincey told Cleveland.com. “Playing the point guard is the quarterback of the team. You have to know every play. You have to know where everyone’s supposed to be at all times at both ends of the floor. He’s gotten better each year. We live by the marathon and not the sprint.