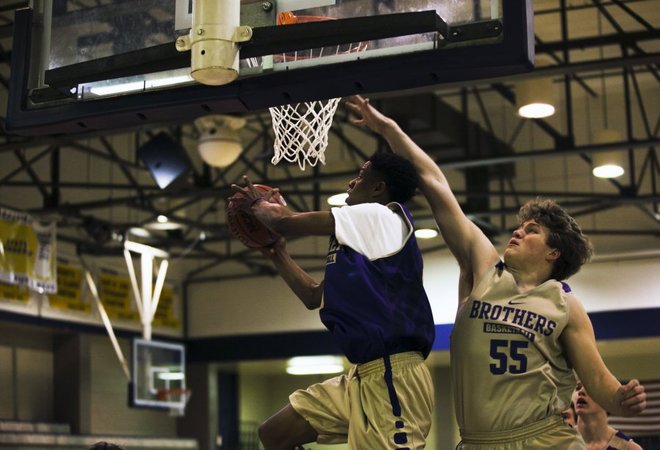 The fall recruiting period opened on Friday which meant college coaches were back on the road, stopping by at various open gyms and in-home visits to track the top prospects on their board.

The fall recruiting period opened on Friday which meant college coaches were back on the road, stopping by at various open gyms and in-home visits to track the top prospects on their board.

Michigan head coach John Beilein and assistant coach Billy Donlon made a surprising stop in Memphis to check in on 6-foot-5 guard Will Douglas.

Douglas hadn’t been previously linked with Michigan, but the Wolverines were among the schools watching the class of 2017 prospect at a 6 a.m. workout on Friday.

Ranked 112th nationally by 247Sports Composite, Douglas holds offers from Alabama, Florida State, Marquette, Memphis and Ole Miss. The Wolverines were two coaches deep at the workout along with coaches from Ole Miss, Memphis and SMU.

Happy to have Michigan, Ole Miss, Memphis, and SMU on campus this morning! #ElevateYourGame #GoBrothers pic.twitter.com/ufU1ZG1YpR

Here are junior year highlights of Douglas in action.

Kentucky head coach John Calipari met with Mohamed Bamba on Friday. Bamba had recently taken an official visit to Michigan and an unofficial to Harvard.

The Wolverines appear to be firmly in the mix after an official visit that went well by most accounts. Bamba rarely speaks to the media, but the Michigan commits that were also on campus spoke highly of his visit.

“You look at what’s going to give you the best, what you’re going to get out of it and who do you want to be around. That’s what I told him. I understand that,” Isaiah Livers told the Free Press of his conversations with Bamba. “He was laughing the whole time. But if you don’t like a group of guys, don’t go play four or three years with them.”

Bamba’s brother, Ibrahim Johnson, spoke with MLive about the trip and how it was setup. Bamba was (unsurprisingly) offered a scholarship on the visit and he also met with the dean of the Ross Business School.

“Overall, he loved it,” Johnson told MLive. “It was a great experience. It was an eye-opening experience because, before that, he was only told how many opportunities that are offered at the business school. But when he got to the school and got to sit down with the dean, it was a different experience.”